The most newsworthy addition to the technology mix this year at The Open Championship has been DirecTV’s request for UHD HDR coverage.

Its Open Experience mosaic channel includes a channel dedicated to Holes 1 and 18. The decision was made to produce the coverage from those two holes in true UHD with HDR (for separate distribution apart from the mosaic), and operating in true 4K mode required 18 Sony HDC-4300 cameras and one P43, as well as an EVS XT4K replay server operating in 2×2-channel mode and at true UHD 4K resolution.

“DirecTV wanted as much native 4K coverage as possible, and they didn’t want to start with 1080p,” says CTV OB CTO Paul Francis. “This is the first sport we have been involved with where we had native UHD and HDR replays, and it’s been a reasonable compromise to stay in UHD instead of 1080p and upconverting it.”

The impact of HDR depends somewhat on lighting conditions. In bright sun, the colours pop much more, and details are a bit more visible. When the clouds and rain roll in, the colours may not pop, but the HDR benefits become clear: in the darker areas (such as the sides of Barry Burn), details that normally would have been lost are visible.

“When the sun is out, there is a wow factor in the production gallery,” says Francis, adding that one of the best shots in UHD HDR comes from behind the players as they walk down the fairway: the 4K and HDR adds depth to the shot looking down the fairway.

“You have the player in the foreground,” he notes, “and there is an amazing depth that comes from that.” 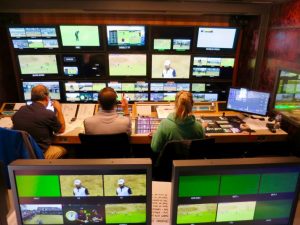 According to CTV OB CEO Hamish Greig, moving to UHD and HDR required that all the cameras on the two holes be switched to Sony HDC-4300. The BPUs for the cameras extract UHD and HDR for the Hole 1 and 18 coverage, and a 1080i signal is used for the world feed and coverage from Sky UK and NBC Sports.

“Five cameras are dedicated to the UHD and HDR production, while 13 are part of the standard world feed,” he says. “The crane cameras in UHD and HDR have an amazing level of detail and depth of field.”

The biggest issue in making the move to even more UHD coverage on a golf course is that there is not enough available spectrum to accommodate 25 radio cameras operating in 1080p.

“It’s been a relatively painless production,” says Greig of coverage of the two holes. “We have the cricket trucks that are already configured for UHD and have the HDC-4300 cameras on board. They had a one-week window, so the gods were shining on us.”

“The most critical component really is the video signal,” he says. “If you have a beautiful picture, you can maintain that through the whole picture chain.”

DTAGS is onsite with two Grass Valley Alchemist Live units for frame-rate conversion from 50 to 59.94 fps. The converted signals are sent to Ericsson AVP2000 encoders and Ateme Titan Live encoders to be encoded via HEVC compression and output at 85 Mbps.

“It’s a pretty high HEVC data rate to maintain the pristine quality all the way through contribution and distribution,” says Burk. “It is then sent to Los Angeles via IP multicast directly into an Elemental decoder, so it is never truly decoded in the traditional sense.”