One of the top events on the global golf calendar, The Players, is under way at TPC Sawgrass in Florida and, once again, the PGA Tour Entertainment team is on hand creating content for both broadcasters and digital services.

And it continues to improve its support of international clients, which, increasingly, are onsite to bring their fans closer to the action. 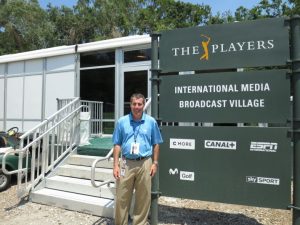 “Five or six years ago, there were only two or three broadcasters onsite, and that included Sky Sports UK and NHK,” says George Ameer, senior broadcast manager, international media, PGA Tour. “Now we have 17 onsite, including Sky and NHK with full productions, five additional broadcasters with onsite commentary, and 10 others filing daily reports.”

A big improvement for international broadcasters has been creation of an International Media Broadcast Village, which houses six 8- x 8-ft. announce booths from Knoxville, TN-based WhisperRoom. The six cabins are located in an air-conditioned tent and offer a much improved announce area compared with the regular office trailers that have historically been a major part of golf coverage.

Each booth is sound-proofed and outfitted with a large video monitor and all the required commentary and announce systems.

“It gives me everything I need in one booth, including a big monitor, where usually we just have a smaller monitor,” says Gregor Biernath, a commentator for Sky Deutschland.

“It’s like driving a Kia or a BMW,” says ESPN Latin America commentator Francisco Aleman, who has covered The Players since 2013. “It’s made a huge difference. The chairs are more comfortable, and, when you are sitting in the same place for six years, you need some kind of privacy.”

And, in a first, both ESPN Latin America and Canal+ will have commentary for featured groups and even on-course coverage from reporters.

“ESPN Latin America will do the featured groups in Spanish and then, at 1 p.m., switch to the EIF [enhanced international feed]; the French will do 90 minutes of featured groups on Saturday and four hours on Sunday,” says Ameer. “Next year, we think more partners will be willing to do both.”

Sky Sports UK, meanwhile, had an onsite preview show earlier this week and a two-hour On the Range show prior to the start of competition. Sky News has a dedicated PGA Tour UK social producer onsite.

The core of PGA Tour’s international coverage is the EIF, which is produced at the PGA Tour Entertainment production facility located approximately 30 miles down the road in St. Augustine. 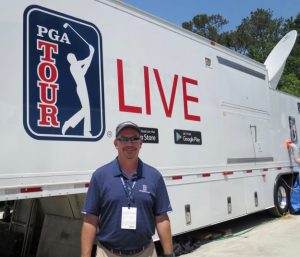 PGA Tour Entertainment’s Dave Dukes says most of the production team is located at the organisation’s facility in St. Augustine

PGA Tour Entertainment. “We have a hub-operation engineer onsite at TPC for handling the additional feeds and supporting everybody, but the director, producer, graphics, and talent are all in St. Augustine. For that crew, it is very similar to a lot of the other weeks, and that’s the way we want it, so that it goes as smoothly as possible.”

There are two live control rooms in St. Augustine with one doing the international feed every week and the other used for PGA Tour Live or, on a busy weekend, as a second EIF. This week, the second control room is quiet because the PGA TOUR Live team is onsite at TPC Sawgrass.

“We take the produced EIF and bring it back to the course on fiber, via The Switch, where the commentators can watch it and make their calls,” says Dukes. “Then we send the EIF via fiber with the audio commentary back to St. Augustine and then out to the broadcasters via Eurovision, where they can select the audio channel that has their commentators.”

Internationally, The Players will be seen by more than a billion people in 226 countries and territories and in 23 languages. Over the years, the EIF has evolved, and the improvements are most notable in the handling of the EIF when NBC Sports is in commercial break or other sponsored elements.

“Dave and his team have developed a transmission hub where we can coordinate with the international networks and give them access to six or eight cameras per tournament,” says Ameer.

Dukes says the hub engineer has access to NBC’s router and can pull in cameras from various holes instead of simply beauty shots.

Live Mobile Group (LMG) has two trucks onsite supporting the PGA Tour’s efforts: LMG HD-X10 for the featured-group coverage and HD-X9, which is deployed for coverage of the Live at 17 feed.

“We also have ENG crews onsite because there is so much to cover,” says Dukes. “There are the official films, coverage for Inside the PGA Tour,’ sponsors of the event, and charity events. It is a busy, busy week for that team.”

Those crews feed content from the Broadcast Village to St. Augustine, where the editing team can log content and get it ready for the production team.

“It’s a mix of HD and 4K, and even 360 videos are being shot on the course,” says Dukes. “We have a 2-Gbps circuit and send the content to MAM, and then, depending on the turnaround time, it will be edited.”

VR is also once again a part of the TPC Sawgrass offering, this year with coverage from the 17th hole (with a VR camera mounted in the water surrounding the green, giving a unique perspective that no fan can get without getting wet) as well as VR coverage of the 12th hole, a drivable par four.

“The VR team is now in a full-size retrofitted truck from NEP,” notes Dukes, “as opposed to being in a Sprinter truck.”

DirecTV is also onsite, doing a mosaic channel with four streams: the telecast, a telecast with enhanced ShotLink data and graphics, a launchpad channel with Toptracer and other elements, and a featured-group feed. That service is then muxed and sent to DirecTV in Los Angeles for distribution.

Eurosport Norway is also on hand and making use of a LiveU system to do live hits from the course. Ameer says PGA Tour Entertainment is feeding beauty shots to Norway, which are inserted via green screen to make it look like the announce team is onsite.

“Everyone is doing something a little different,” he notes, adding, “With so many international players, this is the flagship opportunity for our partners to come here and get access to their hometown players. They have access here that they don’t have at every event.”