Live From The Players: PGA Tour innovations team takes AR and VR to next level

Devon Fox, director of digital platform innovation, PGA Tour, and Wendy Balogh, project manager, Innovation, have been hard at work taking apps and digital experiences to the next level for The Players and for the rest of the 2018 season. Topping the list is PGA Tour AR, an app available for Apple iOS devices that allows users to anchor an AR graphical representation of a hole to a table or other flat surface and then use their iPhone or iPad as a window to see shot overlays and more. 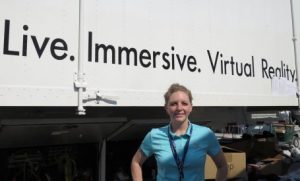 “The idea came out of our first hackathon in December 2016,” says Fox, “and we wanted to prove that we could take graphical models of each hole and the ShotLink data and build an AR experience.”

The user can choose an AR experience that begins by calling up a hole and then selecting a player. That player’s shots are overlaid on the graphical representation of the hole, and the user perspective changes based on where the device is moved (for a short video of the experience, click here).

It’s available as a standalone app in order to keep its size and the size of the PGA Tour Live app (which itself offers tons of stats, video, and audio) small enough so they can be downloaded without Wi-Fi.

There is also a lot of potential for AR as an on-course component, Fox says, adding that the key to those services will be next-generation GPS technology to improve accuracy in matching the real world with the augmented world. Deployment of 5G also will help in those efforts. Fans on the course could fire up the app at a hole, hold it up, and be able to see ball trails, statistics, golfer locations, and more.

“The problem now,” Fox explains, “is that the current cellphone GPS is accurate only to within 10 or 15 ft. So, if you are at the green, it may look like the flag is in the wrong location.” 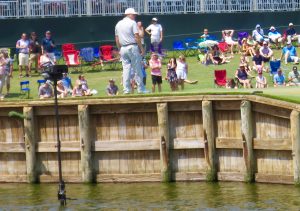 The PGA Tour has also worked closely with Intel on the VR experience. Fox says that, this year, the VR experience for The Players deploys eight cameras on two holes, with three cameras on the short par four 12th hole and five on the iconic 17th hole with its island green. Cameras on the 12th hole are located at the tee box, fairway, and green; the 17th has cameras at the tee, drop area, in the stands, on the hill where fans sits, and in the water about 10 ft. from the edge of the green.

“You can access the VR experience through the PGA Tour Mobile app in either panoramic mode or with a cardboard headset, and you can also use Samsung Gear VR or Google Daydream,” says Fox. “It is also available on Twitter [@PGATOUR] and Periscope in 2D mode.”

The experience is not full 360 degree, which Fox says allows the PGA Tour to open up additional space for sponsor elements and more.

“We also have the PGA Tour Live programming integrated into it via picture-in-picture,” she adds.

The big operational improvement from last year is that the VR team is more than 20 strong and is operating out of NEP’s Cobalt 53-ft. production truck. Last year, a smaller team operated out of a Sprinter van, but a more robust production required more robust facilities.

“Each camera has 12 sensors, six for the left eye and six for the right, and we take the sensors and blend them together for the 3D experience,” says Blake Rowe, implementation manager, True VR, Intel Sports. Rowe and his team will be onsite for the Memorial Golf Tournament in two weeks and are also involved with VR for the NBA Western Conference Finals and the upcoming NBA Finals.

“We now have replay, EVS, a producer, director, graphics, more cameras, and an announce booth for our VR host,” says Rowe of the need for larger facilities. 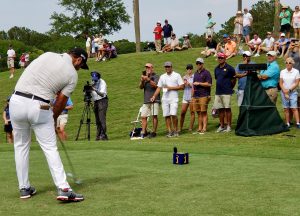 hospitality suites and is the result of a partnership with Striver Labs. In the game, players have a chance to put on a VR headset and swing a virtual club on the 17th hole and also use a virtual putter.

“We took the flyover models for the holes and skinned them down a little so that users take three shots: the tee box, then the drop zone, and the green,” says Fox. “And we have older highlights, so they can try to re-create shots.”

The PGA Tour’s commitment to all of the experiences and innovations at The Players will be revisited in two weeks for The Memorial Golf Tournament in Muirfield, OH.