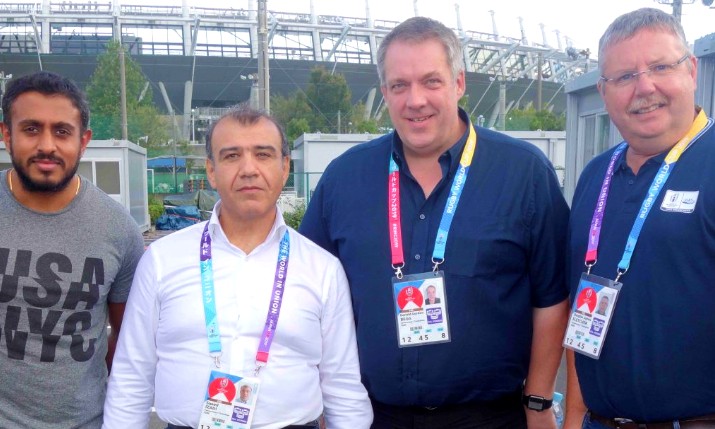 NEP is on the road around Japan supporting the Rugby World Cup production operation on behalf of host broadcaster IGBS and its client World Rugby.

NEP Major Events has coordinated a large team, driven by NEP Singapore and NEP UK teams with flypacks, moving around between the 12 match venues supporting four rugby TV production crews on behalf of IGBS, a joint venture between HBS and IMG Media.

Dougie Fletcher: “There are 12 venues but from our point of view we had to split it up, so there aren’t 12 kits. There are eight core kits – routers, mixers, audio desks – and eight and a half prime kits, with cameras, lenses and EVS. We have four ‘extras’ kits, which is an additional four cameras and an additional EVS that we move around separately to cover the bigger games.

“And then we have eight tech teams. So it’s been quite a jigsaw trying to move all these pieces around. It’s a challenge! The Sapporo venue was only for the first weekend, so we’re now down to 11 venues.

“There are NEP people in each tech team, supplemented by freelancers. There are four teams from NEP Singapore and four from the UK. This was the ideal opportunity to bring the UK and Singapore together.”

Donald Begg: “If you looked at the Winter Olympics we had about 12 different NEP divisions all coming together on the Eurosport operation. At the Super Bowl this year we had teams from the UK and Bexel coming together. We can take advantage of being a group, bringing the kit and the people we need to bring – and use local where practically possible.”

Saeed Izadi: “Additionally I think this is one of our core values at NEP. We’re one team. This is where the practicality of that core value comes into play, with divisions coming together for larger events. And if you look across the verticals within the NEP Group – be it our broadcast facilities business or specialised cameras or RF or Mediabank, AR/VR, connectivity – it’s where that core value comes together.”

Dougie Fletcher: “There are no big trucks in this country I believe; flypacks were the only option. Saeed’s team supplied four identical SDI kits and the UK team supplied four IP kits. The extra system, from the UK, is a baseband system.

“It’s a jigsaw where there’s kit moving literally every day – and this is why the kits had to be identical, so that when we bring in that prime kit we know exactly how it’s going to get plugged up. There isn’t a lot of time for changes.”

Donald Begg: “We’re still very much in a transition phase, which is dictated largely by equipment lifecycles. Most of our CCUs and EVS are still SDI interfacing. Our vision switches are already IP, we’ve progressed with those. The core IP system is a Grass Valley UCP platform along with Arista switches.

“Actually the four IP systems here are the same as Wimbledon. We did Wimbledon this year and brought it back to base and divided it into four pre-configured, and then sent them on our way.”

So the amount of movement and the number of venues for Rugby World Cup causes a level of complexity here in Japan which is a major challenge?

Dougie Fletcher: “Yes, in the Olympics scenario kit will go into a venue and it might move once. This system moves every day, whether core, prime or extra – or the tech teams. From that complexity point of view, this certainly feels bigger than the Olympics. It’s a complex logistical manouevre.

“The extras kits come into play for certain games. Every game is minimum 23 camera coverage. We then have this kit that travels independently, and that will go to let’s say the England or Australia game, which takes it up to 28 camera coverage.”

Siddharta Tyagi: “We have two kits of GVG 86 and two kits of Sony 4300s, and the UK kits are all 4300s. The challenge we have is to create multiple formats out of one vision desk. Setting up the vision desk itself was complex, and then educating the operators was also a challenge.

“We did it successfully — but we have to keep a close watch during the match. When you follow, it’s not only the source; you need to follow the graphics and the wipes and every DPM as well.”

How does this event embody the big production trends out there – or does it? Because of the geography and culture of Japan, should this be viewed as a one-off event?

Dougie Fletcher: “I think what it will do is enable the NEP Singapore and UK teams to work more closely together, because we’ve gone through an understanding of workflows and work processes. There were issues to be ironed out, and that has all come together.

Saeed Izadi: “Major events are complex in format, but also complex in number of items of equipment. Then you multiply that by eight or nine kits, and suddenly you require a huge amount of items. The workflow here is unique, because we are mixing quite a lot of formats and standards together, and achieving an output which is multiple formats and a lot of conversion.”

Siddhartha Tyagi: “You have three different kits, working at the same time at three different layers. You have 4K, P and I – straight from your CCUs, going into your routers and feeding your switchers and then going to the IBC or RHBs. There can be up- and down-conversions coming in, so there are a lot of moving parts.”

Dougie Fletcher: “One other challenge is that there are four different rugby production teams, from France, UK, South Africa and Australia. They all each have their own way of working.

“We had a workshop in Bracknell where we tried to set out parameters for them to work in. But when you get on-site each director and producer has a slightly different way of working. If you’ve got a different production team coming in for a match the following day, then there’s a change which is another layer of complexity.

Siddhartha Tyagi: “Every director has different camera numbers, even though the cameras are the same and the positions are the same. So if the French team leaves and the UK team is coming in the next day, your monitor wall changes, as do your UMDs and tallies and EVS names. There’s a lot to do, so you have to keep preparing for the incoming production crew.”

Maybe it’s hypothetical now, but could this event have been approached with some remote production in mind? Is that the way major events are ultimately going?

Donald Begg: “NEP can definitely do remote production for major events like the Rugby World Cup. Our recent IAAF event in Japan, with production being done in Sydney, demonstrates this.

“The Rugby World Cup has production teams from South Africa, Australia, France and UK. One of the key driving factors for remote production is a reduction on travel, from both a cost and a CO2 emissions point of view. Today, we would still need to travel the teams to one of our production centres, reducing the benefits of saving on travel and CO2 emissions.

“The other benefits would still be an advantage, and the savings on temporary cabins, air-con, power generation, etc would be significant. That said, you would still need the camera crew, floor managers, cable riggers, a number of engineers, connectivity specialists, etc. on site.

“It would be interesting to work through a scenario for a ‘World’ event, with the production teams staying at home. Ultimately, it comes down to what our clients ask us to do, and whilst we might suggest a remote solution to them, it’s their decision.”

In wrapping up, while we’ve talked a lot about technology, this seems to be just as much about logistics – and about people.

Donald Begg: “Yes it is about people, and worth saying it’s about the quality of people. We have about 230 people in-country for this event.

“We use SOS for transport, and the quality of the whole crew here has been amazing. You can have the shiniest kit in the world, but you need the people to make it work. Technology is as good as the people who drive it. I would doff my hat to the guys in the crews.”