NBC Sports is on hand at The Ryder Cup with a team of 250 but at the same time a team of hundreds more back home in Orlando are working hard on the ‘Live From’ studio show as well as pre- and post-match coverage and press conferences. 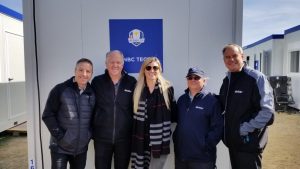 That team is leveraging fibre connectivity, the NEWBERT flypack, and a new transmission kit, three operational changes since the last Ryder Cup was held in Europe in 2014 at Gleneagles, Scotland. The other big change? This is the first Ryder Cup where NBC Sports has tapped into CTV OB as the provider of its remote production facilities.

Keith Kice, NBC Sports, technical manager, said the NBC Sports Ryder Cup production team has feeds from 80 cameras at its disposal: 41 unilateral cameras as well as 39 from ETP’s world feed. It also has access to 128 channels of EVS replay with nine EVS servers under the control of NBC operators and seven others handled by ETP staffers.

Soucy says that key to the efforts of those operators is the work done by the five RF cameramen on the course as one is assigned to each of the four groups on the course with a fifth roving.

“Sharing is important,” said Kice. “You don’t want the course swamped with too many RF and Steadicams so ETP covers the Europeans and we cover the Americans.”

Like at the Open Championship this past July, the NEWBERT flypack is playing an important part in tying the TV compound at the course to the Golf Channel’s production facility in Orlando, Florida.

“The Open showed the flexibility of NEWBERT and the transmission kit we also debuted at the Open uses fibre and IP delivery [between Orlando and here] so that the two sides can interact seamlessly,” said Marc Caputo, Golf Channel, senior director, remote technical operations.

NEWBERT provides the team in Orlando with integrated tally and router control and they have 14 traffic paths dedicated to ‘Live From’. There is also a primary and backup of the match coverage and then nine fibre paths return for closed circuit needs and also to ensure that the two reporters on site at the Ryder Cup are as in sync as possible with the team in Orlando.

“We also have our social media team in Orlando instead of travelling someone here and that is working out very well,” said Caputo.

Eric Gardner, Golf Channel, VP, Operations and Technology, is back home in Orlando overseeing the operations and he says that the use of fibre makes latency almost non-existent and less than two frames roundtrip.

“We want to prove out the ROI over the next few years and we don’t want to leave the transmission kit waiting for another Open or Ryder Cup,” he said. “We want as much utilisation as possible.”

Each event is also allowing for the team to figure out new ways to connect and also get familiar with new levels of signal access.

“We have visibility from Orlando into the Magnum routing control system, so we can see and peer into the router [in the compound] and can route signals based on their source names,” he explained. “And we have six routable paths so that we don’t have to call anyone at the compound. We can just route it.”

The tally connection is an important one in terms of communication and Gardner says the RTS RVON intercom over IP has been very solid. An investment in RVON cards has paid off with better clarity, according to Gardner.

Gardner says Golf Channel will be looking to do more roadshows and more ‘Live From’ shows using NEWBERT and the transmission kit. Redundancy is a big part of the equation as well with two IPX routing cards, dual and diverse circuits, and dual streams for every path.

“We also worked with Evertz on hitless merging so that if the primary stream has bandwidth issues we don’t have to do a manual cutover,” said Gardner. “It’s very cool.”

Another improvement to NEWBERT since the Open in July is that it now has Sony HDC-1700 cameras.

“I am extremely proud of our team who continue to build on past experience and relationships, which we see as the key to our success,” said Goss.