Live on two wheels: Eurosport prepares for sunflowers and close ups at the 2021 Tour De France 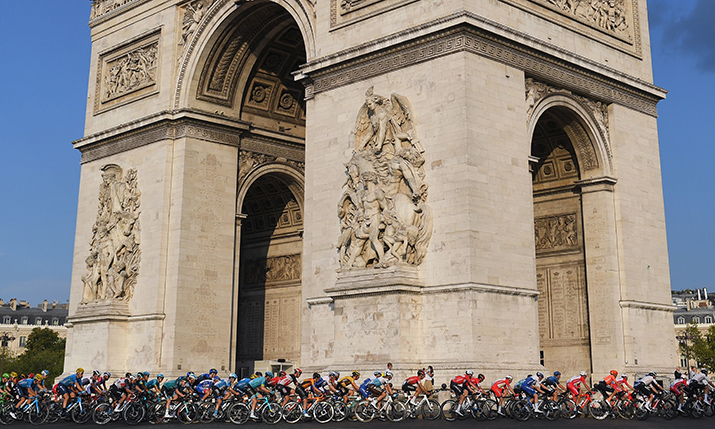 This weekend marks the start of the 2021 Tour de France

The Tour De France starts this weekend and with Sir Bradley Wiggins heading up the coverage from the peloton, Eurosport aims to cover every stage of European road cycling’s big event.

Fresh from Italy and the Giro d’Italia, the Eurosport cycling team, led by Guy Voisin, director of cycling at Discovery Sports, is putting the final touches to preparations for the next big event in men’s professional road cycling in Europe, the majestic Tour De France 2021. The Grand Depart gets underway in Brest on 26 June, with the race finishing on the Champs-Élysées in Paris on 18 July.

The host broadcaster for the Tour is organiser Amaury Sport Organisation (ASO) with production handled by France Télévisions.

“They have four motorcycles, a couple of helicopters, and a plane flying over for access to the satellite transmission,” Voisin tells SVG Europe. “That bumps it back down to the OB vans at the arrival line. Euromedia takes care of the transmission data for France Télévisions. It gets pushed back to us in Paris, and we’ll be receiving it via RF or fibre depending on the stage [of the race] and depending on the availability of it.

“We also have three roaming reporting crews on site that use Aviwest [4G mobile transmitters],” he continues. “Among the three reporters they can talk 10 languages, so they’re off getting interviews from all the various riders, coaches, whatever they can get to on site.” 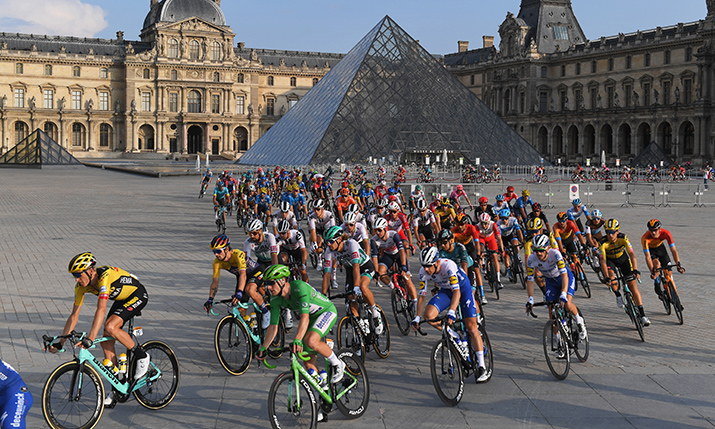 Live reactions to the action

Eurosport talent will also be on a motorbike, reporting close to the peloton. “For the first half our man on the ground is Bernie Eisel, the ex-rider, and then we have Bradley Wiggins coming in for the second half. We have full back and forth communications with them and a POV camera set up on the bike to get their live reactions,” says Voisin. “We have a 4G setup for following Brad around, to [supply content for] Brad podcasts, Brad inserts and so on. So [in total] we have four 4G setups on the Tour that are specifically ours.”

“Everything comes in remote to Paris,” says Voisin. “Our host feed PAN [short for Eurosport’s Pan-European feed that its multiple markets receive] is produced out of one PCR in Paris and it then goes into our engineering system, where we tie 20 PIDs [packet identifiers] of audio to it.”

“Maybe 60% of our viewers are hardcore cycling fans; they never want to get away from the race. They want to see the face of their hero, all the time. The other 40% are people who are watching the Tour de France to get away from it all, to feel the experience, so that they’re almost on vacation themselves”

“We have the commentary in the main languages of all of our territories, all coming from one PCR,” he continues. “Whereas a normal broadcaster might have four or five commentators, because it’s a six hour race I have just shy of 110 commentators on a single stage of the race, in all of those languages. That’s down to some great work being done by the GT&O [Global Technology & Operations] teams at Eurosport.

“On top of all that, a lot of those commentators aren’t necessarily sitting in booths, they work with a system called Iris. For example, for the UK, I have one commentator in the booth in Chiswick, two in a booth in Bath, one is at home in Surrey and the other one is in Majorca, but line-wise you cannot hear an audio difference between them. It’s really impressive what they’ve done.”

The complexity does not stop there. “We have three local shows on this particular broadcast, in France, Spain and in the UK, and in each of those areas they have their own PCRs as well. They’ll do an opening show for 15 to 20 minutes as an intro and then on one cue we all join the PAN feed and follow that throughout. Later, when we’ve determined who the winner is and we’ve had a few replays of it, we give a [return] cue and those local markets break away from the PAN feed and go to their own shows.” 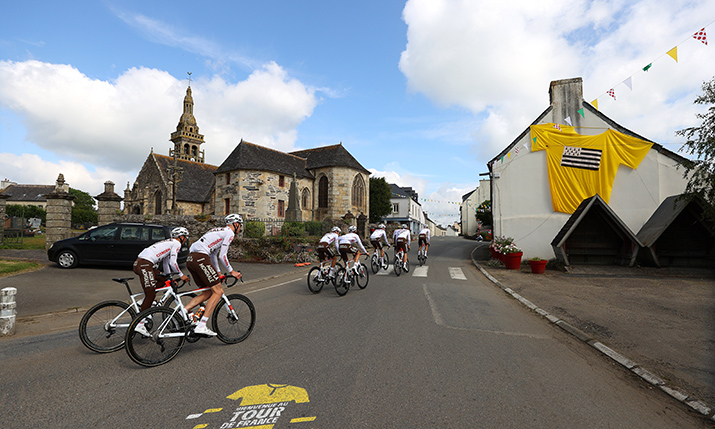 Controlling all this from Paris is executive producer Philippe Celieres. “He produces the three Grand Tours and he’s very good at his job,” says Voisin. “Also in the PCR we have a live producer who has a PA to call all the commentators in and out of the commercial breaks in all their languages. We have a couple of LiveTouch operators and a couple of graphic operators and, surprisingly, we only have a couple of audio operators, even though they are handling 100 commentators coming in. They’re absolutely phenomenal and they’ve been impressing me for two years.”

“The race is going to be awesome to watch. Sport-wise, it’s going to be a killer,” says Voisin. “It’s exciting with the Slovenians [Tadej Pogačar and Primož Roglič] coming back wanting to re-own it, and having Geraint Thomas going in there in the best shape of his life. It’s going to be a great race.”

The Eurosport production plans never to cut away from the action, and also offers a digital route to view the Tour on discovery+, GCN+ and the Eurosport App. “We’re always on the race, but it can be a split screen with added value content such as live interviews,” Voisin adds. “We have a producer who handles all the added value content and follows the story of the race.”

“Maybe 60% of our viewers are hardcore cycling fans; they never want to get away from the race. They want to see the face of their hero, all the time,” he continues. “The other 40% are people who are watching the Tour de France to get away from it all, to feel the experience, so that they’re almost on vacation themselves. We bring in the helicopter shot on an ISO feed, showing off some beautiful chateaux or the incredible sunflowers. During this COVID period where people are really feeling restricted, it’s letting them ‘travel’.

“ASO does a great job of telling us all the touristic [scenes] we’re going to hit and give us descriptions of what they’re doing so that’s all handed out to our commentators, but we sometimes give our own broadcast a little bit of added value by bringing in some [historical context] to what’s happening beside [the race].”

Despite all the experience on hand, there are also pain points to consider, including of course COVID-19. “It’s a massive challenge for us, like every live production, to just get the teams to and from [the race],” says Voisin. “However, ASO is handling things very well and that has meant we’re able to still have the races. The big challenge for me is actually not getting inside the peloton. We can’t get to the team buses, or to the hotels and we’re not allowed to talk to the riders except in the mix zones. We like to get into the dirt of it and get access to the bikes and the mechanics. It’s a tough one, but we are finding ways around it, like asking for an interview just before a rider leaves the race.”

“Technically, there are always challenges,” he continues. “We’d like to have less bad weather. During the Giro we lost an entire day of footage because the host broadcaster couldn’t fly their plane or their helicopter due to weather, so it was only the motorcycles on 4G, which in the mountains gets a bit limited, so that was a tough one.”

Nor is this the only event the cycling team are covering. “The Tour is 21 days but we broadcast 607 days worth of cycling racing a year at a minimum,” says Voisin. “During the Tour we also have the Giro Rosa, a very important 10-day race for the women’s peloton, that we’ll be broadcasting live and in highlights, and the Olympics are right around the corner. But all of us are geared up. We’ll finish the Tour in a professional and high fashion and then hit the Olympics with all the might that Discovery can bring to it.”