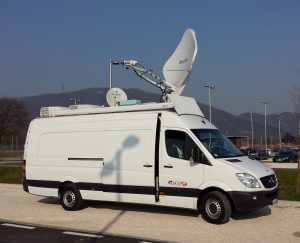 ‘The Drift’ is an exciting sports car discipline in which the competitors do not have to prove to be faster than the adversaries. Instead, the challenge is to demonstrate more skill and flair in maintaining control of the vehicle whilst oversteering, with the resultant loss of traction in the rear wheels.

The ranking of the competitor is determined by the votes expressed by the jury, which is composed of a group of experts in the field that give an opinion on each characteristic of the performance. The judges are able to make their decisions by using GPS data captured onboard the cards, with the resulting scores then shown in real-time on a large screen adjacent to the start/finish point.

Using almost-standard sports cars that have been emptied of unnecessary features and enhanced with rear-wheel drive only, the drivers are obliged to adapt to changing terrain conditions throughout the rain. It is often the case that they only have one test session on the day before the race.

The circuits can be natural or artificial in open spaces specially prepared with obstacles. Usually the driver who wins is the one who is able to adapt better and faster to the conditions of the surface on which the race takes place, and who shows consistency and precision in the various stages.

The mountainous location heralded a number of challenges for the project team, including the need to locate four of the five Sony cameras at ground level, rather than on scaffolding or mounts. Instead, they were situated near the main ‘Clips’ that constitute the key points in the circuit where the cars drift. The fifth camera was located at the start/finish point of the race, where acceleration tests take place.

The race was held on a Sunday, while on the previous day the tests were carried out and the rankings of the evaluation points on which to start the day after were compiled.

The production entailed the use of two mobile production vehicles – one for filming, editing, graphics insertion and audio control/mixing; the other for general support and to carry equipment including satellite link devices.

The main production vehicle was based on a Mercedes Sprinter ‘Ita790’ and was built by the team at Livesat. Specific brands and solutions chosen for the vehicle include Audinate’s Dante (for digital audio networking), a Yamaha audio mixer, Genelec monitoring, a FOR-A video mixer, a Riedel intercom, and a Harris audio/video mixer, among other equipment. 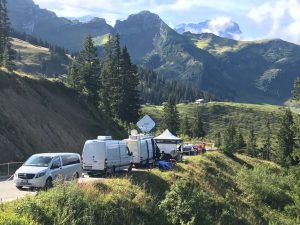 The audio was recorded in stereo and the video mixer simultaneously controlled the Sennheiser microphones positioned above each camera. All the graphics were created on site by a company called Grafica And Multimedia, who also managed the satellite link.

In addition to the live real-time broadcast, five minute highlights packages were prepared as summaries of the most spectacular phases. This coverage was enhanced by the use of additional ‘action’ cameras mounted in the front and back of some of the race cars.

The event was filmed live by Livesat for complete delay broadcast on Canal+, as well as being simultaneously streamed on the Drift Federation website. More information at https://www.facebook.com/CFDRIFT/.