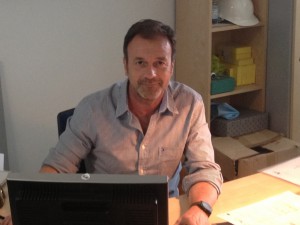 “Having to follow two championships [simultaneously], MotoGP and Superbike, [means that] we use a proprietor OB van called Unit 27, as well as several external services,” explains Alberto Bianchi, director of production for the ‘engine area’ at Mediaset. “Being so time-compressed, we make some effort to manage our Unit 27, given that, in the face of a targeted optimisation, it is committed not only [for] sports but also on other, more general productions.”

Previously, at the beginning of the year, it was known which dates the mobile vehicle Unit 27 would be required and for which races. But now the resources need to be allocated as and when. “In general,” says Bianchi, “we might say that it will definitely be committed for seven or eight races of the MotoGP.”

2013’s first engagement for Unit 27 is the Mugello circuit, followed by Barellona, ​​and then the Netherlands, Germany, San Marino, Aragon and Valencia. But along the way there may be a number of changes given the considerable timespan involved.

Bianchi and his team have responsibilities in multiple areas: besides booking accommodation, they have to understand how many people will attend the event, and maintain relations with the various technical managers both internal and external. Other tasks include the correct disposal of the movable and available resources (such as Unit 27) to meet all the technical requirements, overseeing the technical specs, the decision whether to use RF cameras rather than ENG…and a thousand other details!

It is therefore essential to work closely with the broadcaster in charge of the event, arrange for the satellite links and book the vans in charge of uplinks. For example, in Europe there is a contract with an outside company that handles all the connections, while in more remote locations, such as Malaysia and Australia, local services are being relied upon.

The next step is to decide upon the number of cameras to be used, in agreement with Dorna, which organises and manages events related to the MotoGP, produces the international broadcast signal, and operates international television rights associated with motorcycle events.

Mediaset has official permission to operate in the pit lane and perform all the integration and customisation required, encompassing a number of camera settings. In this case we speak of two cameras with Lynk RF that perform the interviews after the race, sometimes out of the paddock.

Bianchi specifies: “This is really team work and we have to interface with the director, producer and Infront. All the pictures we take are somehow agreed upon before the shots, [while there are specific requirements, such as], for example, you cannot frame the track. ”

Furthermore, as regards both MotoGP and Superbike, a production studio is set up on each circuit to shoot the programme Fuori Giri. Three studio cameras are used for the shows, which feature discussions about the race with journalists and other guests,

The Unit 27 by Mediaset is therefore on site with seven cameras for various functions surrounding the racing action: two RF cameras for the after race, plus three studio cameras and two more ENG cameras used in the days before the race (and sometimes even on the days of the race), to record interviews rather than press conferences and ‘collateral’ events.

The footage is most often edited on site and then sent via satellite to the central control studio at Mediaset in Cologno Monzese, where the team is responsible for finalising and integrating all the graphics. (In the past years, graphic inserts were entrusted to outside companies that were working on the spot and everything packaged before transmission.) Images shot are edited into stories that are used during various news broadcasts by Mediaset.

All recordings are made on server in the main control room at Cologno Monzese, where all the various satellite signals are gathered and satellite links remain open for several hours. In practice, Unit 27 from its position on the circuit delivers news reports as well as a complete safety feed of the various cameras, sent via satellite to the HQ near Milan. The satellite connection is used for several days, durings tests, warm-up and the actual race.

Alberto Bianchi adds: “To organise the event around thirty people are involved, of which 6/7 are journalists and […] the director; the technical staff amounts to about a dozen people and the rest [are production personnel].”

Unit 27 is always flanked by two other OB vans, a power generator and a ‘tender’ as a support vehicle, so in total Mediaset moves a total of three vehicles for each event.