Service provider NEP Switzerland and broadcaster Teleclub are on the air with live UHD HDR every weekend for the new football season.

Since the kick-off in July, NEP Switzerland has produced more than 20 Raiffeisen Super League (RSL) matches in the HDR format plus several Euro-League games for Teleclub. 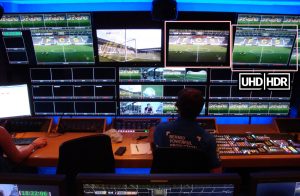 Two NEP Switzerland OB vans were upgraded to produce UHD/HDR this summer ahead of the new season. Both vehicles were conceived and delivered by system integrator Broadcast Solutions and upgraded with additional Grass Valley equipment to meet Teleclub’s demand for UHD/HDR production.

Trond Hermansen, CTO, NEP Broadcast Services Switzerland told SVG Europe, “We are now doing UHD/HDR as our regular daily business. We started to do 4K UHD regularly for Teleclub in 2016. Even then they wanted to do HDR, but we held it back because the technology was not ready.

“They have been pushing us to do it, and for this season we felt the technology was where we needed it to be to do it in a normal manner. So we went for it and upgraded for HDR ahead of this season.

“Teleclub has viewing rights for all RSL matches and producing rights for four out of five matches per round – there are ten clubs in the Swiss League,” explained Hermansen. “So we do two games on Saturdays and two on Sundays.

“This is distributed through the Swisscom network – the owner of Teleclub. They have been on an IP platform for a long time. They don’t do DVB-C, they have been doing IP on the set-top boxes for several years.

“Since 2016 Swisscom started to push out 4K set-top boxes, which means every viewer who had a box could swap out for a 4K box – and since summer 2016 every new subscriber automatically receives a 4K set-top box.

“These boxes were future-proofed at the time, so when we started to do HDR we only needed to push out new firmware in the network and everyone with a box since 2016 could now receive UHD HDR,” said Hermansen.

To prepare the UHD-41 and 42 trucks, the company upgraded all of its Grass Valley LDX 86N 4K 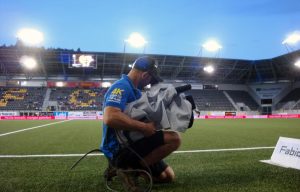 cameras with perpetual HDR licenses. Within each OB van 12x Densité 3+ XIP-3901 processing engines are deployed; consuming 4RU, they offer up to 24x processing channels for up/down and colour space conversion as well as mapping of the various UHD/HDR signals.

On the output side, the OB vans deliver a UHD/HDR and an HD/SDR signal to be fed via fibre to the Teleclub studios. The HDR signal is delivered in UHD 3840×2160/50p HDR in HLG format. For users viewing the matches in HD/SDR the signals are converted and mapped into HD/SDR 1080i.

Producing in HDR: Lessons learned across shading and monitoring

“The trucks were not built to support HDR, so we had to swap out and go to Grass Valley to do the down-mapping from HDR to SDR on our transmission path – and the same for up-converting from SDR to HDR.

“The special thing when we started in 2016 was that we did not do any workarounds; we did everything natively in UHD including all slow motions and graphics. We have now had to make a compromise on the two super slo mos, which are running in 1080p. We have not changed anything on staffing – everything is one-to-one.

“I was very scared when we moved to UHD HDR about the implications for HD SDR, because we have an obligation to deliver a world feed in HD SDR – and I can’t compromise on the quality of this one,” Hermandsen continued.

“I was scared regarding how to bring back the SDR signal at the same quality as before. Surprisingly, it turns out that it looks even better, because it’s captured in HDR and down-mapped to SDR. 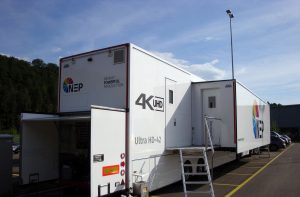 “I know some people are dual-mode when they do HD and UHD HDR, running parallel MEs on the mixer to treat the SDR path and the UHD HDR path as two separate productions, slaved after each other. This was impossible for us as we use a lot of effects with split-screens and inserts.

“And we are delivering five transmission paths (each truck sends out two UHD and three HD per match), so all this versioning double-up, with SDR shaders and UHD shaders — that was not an option for me. It really had to be one-to-one,” he said.

“And that’s why I was really afraid regarding the end quality of the HD SDR. Again I was really, really surprised to find out that was absolutely not a problem. It’s a win-win situation.

“The big remaining drawback is monitoring,” he said. “24-inch monitors are our preferred size inside the OB truck. Currently they’re not available in HDR – no manufacturer in the world is producing those panels. That’s my biggest concern.

“I want to get rid of conversion for monitoring. Currently I have to use emulation panels for monitoring, but I want native 24-inch HDR panels. I’ve been told 21.5-inch exists and the next one up is 32-inch. There are no panels in between, currently,” said Hermansen.