At NAB SVG Europe sat down in the booth with Imagen head of growth Jessica Dahan to look at the path ahead for the company. “Imagen recently landed some new investment, and as part of that the strategy is really to grow the company drastically over the next few months,” she said. 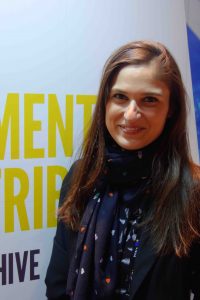 “We have two lines of strategy: one is to try to develop the enterprise market, because we are very strong in the sports sector but trying to develop our offer to incorporate the enterprise use case. The other line of strategy is that we want to develop our activity in the US, so we have been recruiting people. We currently have two people permanently based here, and we are recruiting another three or four in the next few weeks, with a view to really expanding our operations here in the US.

“Imagen is a video management and distribution platform that allows our customers to manage intuitively their video content to make sure they unlock potential in that content, whether they are sports federations, sports rights holders, media production companies or media distribution companies,” said Dahan. “The platform has been around for some time, but it has changed a lot, especially over the past two years since we’ve had our new CEO Charlie Horrell.

“As a company, because we are growing really fast, we are working around our branding and messaging to make sure that everything is really aligned and clear. Because I think in the past the platform has developed itself based on the needs of our customers, to the point where it was it was a bit harder to figure out, ‘how do we position ourselves and how do we talk about what we do?’

“We are working really hard at the moment to clarify that. So the messaging specifically for this show is that Imagen allows you to intuitively manage and distribute your content in a fast, efficient and secure way.

“So, no pressure! Lots of big ambitions. But we feel we are recruiting the right people to achieve those ambitions,” said Dahan.

And one issue you have is that the nature of the Imagen platform means that it is often hidden and ‘invisible’ — where it is embedded with a client such as the English Premier League.

“Exactly. And one of the beauties of the platform is that you can customise the front end so that it looks like a Premier League portal for the end user. You don’t know it is Imagen, unless you’re in the know. And some of our customers use the platform purely internally, as an intranet if you will, to manage their content. Some use it as an external-facing interface.

“IMG Replay for instance is actually an Imagen platform, but from the front end it looks like [it’s from] IMG and Premier League and shared with broadcasters and IMG’s customers. It could potentially even be a B-B-C platform, for example if one of our customers wanted to create a ‘Netflix’ if you want, for their own business — that’s completely do-able.

“So from a business strategy perspective it allows our clients to also figure out which content is the most popular and which is the most in-demand, and develop their operations around it as well,” said Dahan.