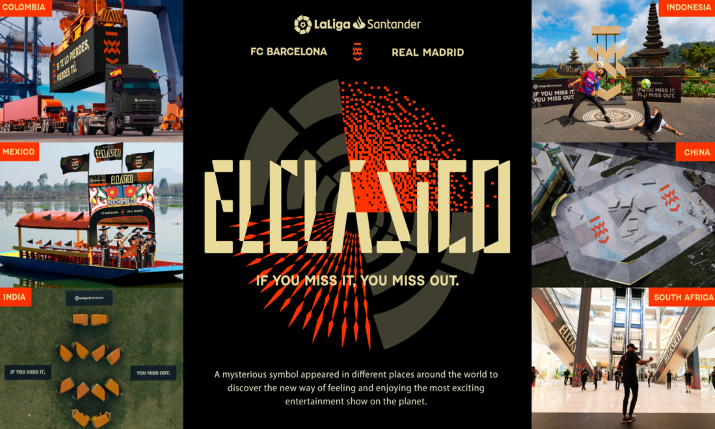 LaLiga is showcasing a new brand for ElClasico, the most watched club match in world football in which FC Barcelona and Real Madrid face off in an epic clash, as well as an enhanced audio visual broadcast plan with its technical partner, Mediapro.

The initiative is part of LaLiga’s international development and promotion strategy around ElClasico, the most iconic match in its fixture list.

ElClasico represents one of the longest running club rivalries in the history of world football. Over 4,500 people are taking part in over 50 of the new brand activations unveiling ElClasico’s fresh identity and logo.

This year, ElClasico will be lived with even more passion and excitement than ever. Fans tuning in to watch the match from their home, local bar or favourite restaurant will enjoy an audio visual experience featuring only the very broadcast technology.

Highlight events include a screening of the match in Turkey with over 300 participants, an activation in India featuring traditional Indian mopeds, and a special event in Mexico City featuring the decorative trajinera boats of Xochimilco. Other countries such as China will host special screenings, while musical shows and traditional dances will be staged in South Africa, and Columbia will celebrate an event in Medellin’s famous Comuna 13.

“For LaLiga it is very important to be as close as we possibly can to the fans, so we have made a big effort to promote this iconic game on the international stage with over 130 activations rolling out across the globe. With each event we want to showcase the new visual identity of this encounter as well as sharing different experiences with LaLiga, Real Madrid and FC Barcelona fans around the world as we celebrate and revel in this legendary clash of clubs,” said Oscar Mayo, executive director at LaLiga.

LaLiga, always at the forefront of innovation and entertainment, aims with the new ElClasico image to build an important asset that will help enhance the brand value of the competition and its clubs, and which can be used in all related international activations and events within the framework of the competition’s internationalisation strategy initiated a few years ago.