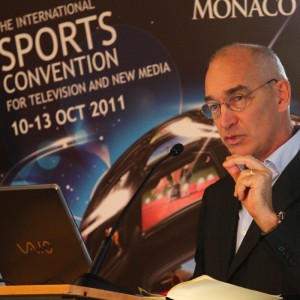 The Olympics being what it is, much of what Web and data specialist deltatre is up to at London 2012 is weighted down by hefty non-disclosure agreements and can’t be discussed. But given that deltatre’s on-the-record work includes varying combinations of data, video and app services and development for the BBC, NBC, France Télévisions, RTVE Spain and Terra amongst others, there’s still plenty to talk about.

What’s interesting is that its Strategic Business Development Director Ciaran Quinn is gradually upping the ante the closer the Games get. Interviews with him from not so long ago talk about half a billion users, maybe as high as a billion. Now? “All in all, we’ll cover about two thirds of the consumers for global digital media,” he says, “and my prediction is that we’ll have over one billion unique users, maybe – and I’ll stick my neck out here – 1.2 or 1.3 billion, making use of digital photos, stats, video, and more online. That is one hundred times what the figure was for Sydney. It’s never been done before. The World Cup came close, it was in the hundreds of millions, but this is going to be so much more. It’s a milestone. It’s not just video content either, it includes realtime data, and access from mobile phones, tablets, the web, connected TV…”

With the sobriquet of ‘The 3D Olympics’ having been quietly dropped in the past year, so the notion that this is the first ‘Digital Olympics’ has gained currency. It’s not of course, that honour probably belongs to Sydney in any meaningful sense, but the changes since then have been astonishing. “Sydney peaked at nine million users globally, and we’ve gone from nine million to one billion in 12 years. That’s astonishing,” says Quinn.

Putting that in context, about half of the world’s 7 billion strong population is expected to watch at least some proportion of the Games on old-fashioned, linear television. But 15-20% viewing online is a huge figure, no doubt aided and abetted by the sheer volume of online content that will be available at the end of the deltare-powered pipes. “Every country in the Americas, for instance, is going to have thousands of hours of Games content and its associated realtime data for all the sports, including the ones that traditionally don’t get much airtime. It’s never been done before. It is perhaps the ultimate long-tail event,” Quinn states.

For the BBC, deltatre is creating what’s termed as the Olympics Results Pipeline, which will drive all the Corporation’s TV graphics (selectable by the viewer) and online video. For NBC it’s building nbcolympics.com, while for France Télévisions it’s creating a solution that leverages and extends its DIVA video player onto tablets and smartphones and, all in all, will feature 15 live streams. For RTVE Spain it’s planning a similar level of activity, making Germany the glaring Olympic omission of the European broadcast superpowers, its broadcasters being tightly constrained by the country’s Rundfunkänderungsstaatsvertrag legislation on the amount of online content they can offer to the public.

“You have to say that the IOC has done great things in embracing digital,” says Quinn. “They’ve put in anti-piracy measures, and they’ve made sure people have the rights. There’s a carrot-and-stick approach when it comes to live sports. People are going to watch the 100m final come what may. The stick is that the IOC has a robust anti-piracy program, the carrot is to make sure the RHBs make great realtime content available to their consumers. And that’s what they’ve done.”

All this activity represents a certain level of investment on behalf of the RHBs, many of whom are already reeling under the pressure of keeping up with the expanding costs of sports rights. But Quinn maintains that it all makes sound economic sense, and points to the huge success of mobile platforms at last year’s Rugby World Cup and beyond. “What we’ve found with BSkyB and their Champion’s League Events Centre, for example, is that if people are given the tools to help them engage further with the content, then they use them and they spend a lot more time watching. That’s a huge advantage for the Rights Holders; more people are going to be accessing more content and they’re going to be staying for longer.”

A billion people plus accessing more content and staying online for longer throughout the period of the Olympics? Perhaps it might be an idea to send those urgent emails now…