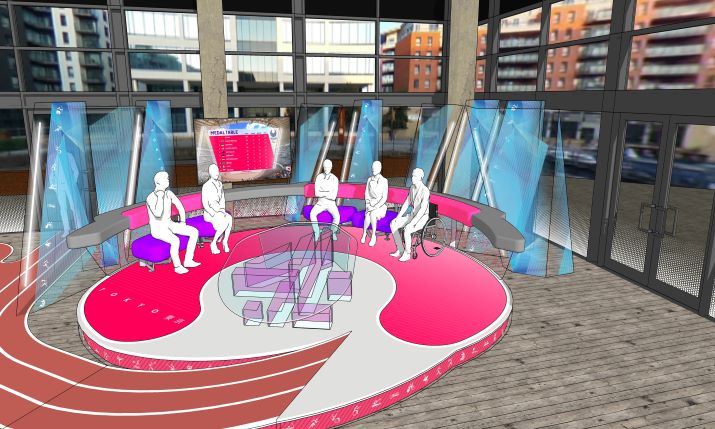 Channel 4 has designed a studio at its headquarters in Leeds, UK, from which it will host a party-style Paralympic show

Production company, Whisper, is gearing up to bring Channel 4’s Paralympic 2020 coverage to British viewers from 24 August, with the Opening Ceremony that is taking place in Tokyo.

With over 300 hours of TV to produce for the broadcaster’s linear offering over the Channel 4 and More4 channels, and a brand new microsite that will allow fans to view over 1,000 hours of sports coverage over 16 live streams, Whisper has its work cut out.

When SVG Europe spoke to Whisper’s technical director for the Paralympics, Richard Bainbridge, he was in Tokyo waiting for staff that had been working on the Olympics to vacate their studios at the IBC so the Whisper team could move in and set up. Meanwhile, Matt Roberts, Whisper’s executive producer for the Paralympics, was at the Ealing Broadcast Centre, Timeline TV’s broadcast facility situated within the iconic Ealing Studios in London, starting to ramp up operations for the production, setting up edit suits and commentary booths as equipment arrived on site.

The production for Channel 4 is working across three locations from Tokyo, Ealing, and also Leeds, where the broadcaster has a studio ready to bring the celebratory atmosphere of the Games straight to fans’ living rooms.

Roberts said: “We’re just working through running orders and things like that now. So over the next couple of weeks we get the [Channel 4 presentation] studio in Leeds, which is the Steph’s Packed Lunch studios. We’ll be in there putting our set in and most of our production staff will be joining us [then].

“By doing [this production] with a central hub in the UK, there are definitely advantages. I’m sure the pandemic will have changed how these big events are done forever more, so there are a lot of advantages as well as the disadvantages”

“Over the weekend of the 21 and 22 August we will do lots of tech checks, with rehearsals Monday 23 August and then live with the Opening Ceremony on the 24th, so we’re deep in the midst of it, basically.”

Timeline is supplying all the technical equipment for Whisper in the UK. Timeline TV’s unit manager for the Paralympics, David Harnet, is on site in Ealing helping Whisper to set up two main galleries plus an additional dedicated athletics gallery, plus eight edit suites and five commentary booths.

“So it’s a big operation,” notes Roberts. “We’ve got a Channel 4 gallery, and because we’re live on More4 we’ll have a Timeline TV OB truck in the carpark, then we have a small sub mix gallery for athletics because you get a variety of feeds out of athletics, so we’ll be making our own composite feed to make sure we feature the British athletes more predominantly in that.” 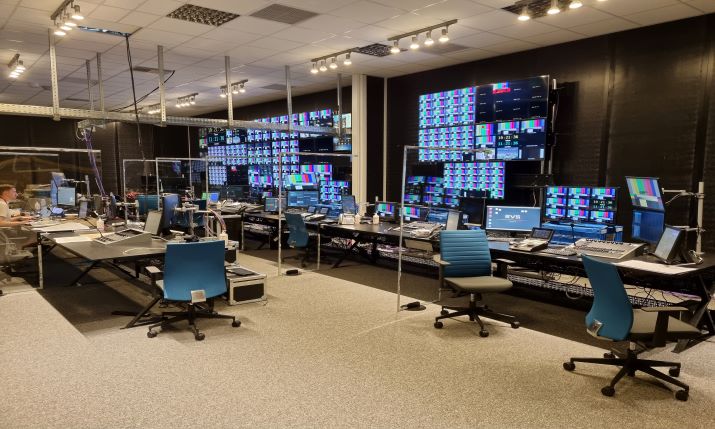 Whisper is ready for the Paralympics, with its set up in the IBC in Tokyo ready to go

Whisper is using some of the ways of working it developed during lockdown to aid it in the production of the Paralympics for Channel 4. Bainbridge says: “We’ll be bringing in a number of those techniques we’ve used to do remote productions [for the Paralympics], so actually I think we’re in a much better place. And I think if we tried to do [this production in this way] this time last year, it would have been a whole different story, but a lot of the newer ways of working are tried and tested now and becoming the norm. [Remote production] is where I think everyone was heading anyway, but [the pandemic has] just sped up the experience.”

Roberts adds: “What we’re doing with having a studio in Leeds and various positions in Japan via a centre in Ealing is actually gives us a whole load of other options that we wouldn’t have had in the past, you know, to be able to get friends and family in, to reflect on it in this country, but also to go instantaneously to Tokyo or to the velodrome, has opened up a whole new level of opportunities.

“There are challenges around it, like traditionally we’d all be on planes now to Japan and an awful lot of work would get done in that last couple of weeks in the IBC,” adds Roberts. “Whereas this way, a lot of people will be coming in from home, they’ve got to take their kids to school on that Monday morning or whatever, whereas traditionally, when you’re all in one place that makes things a lot easier. Communication is going to be very important to us and remote presenters, and the time difference will be a challenge as well, but we’re able to produce a huge amount of output for Channel 4 from this remote base and by having the kind of facilities Timeline’s been able to provide.

“By doing [this production] with a central hub in the UK, there are definitely advantages. I’m sure the pandemic will have changed how these big events are done forever more, so there are a lot of advantages as well as the disadvantages,” says Roberts. 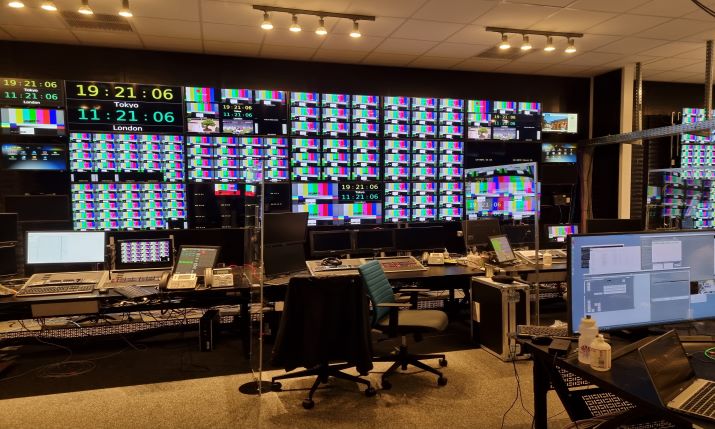 Whisper is working across three locations for this Olympics with its set up in Tokyo shown here at the IBC, plus the UK-based galleries and more in Ealing, and Channel 4’s presentation studio in Leeds

There are 80 people in total in Japan, down from the original plan to send 250. This team includes commentators, production staff, presenters, VT editors, and camera people. There are 130 crew in Ealing, plus a further 45 including talent in the studio in Leeds.

Continues Roberts: “The bulk of the production now gets done in Ealing, so all the producers who are putting the films together and the edits of the action will be here in our eight edit suites. All the programme gallery team will be here in Ealing, and then in Leeds we’ve still got obviously camera people for that studio facility, we’ve still got presenters, and some production management, because we’re hoping to be able to bring in family and friends into our live studio to watch their loved ones compete. So that’s kind of what our Leeds studio promises to capture; how people in the UK are watching the events, so we’ve got a logistical operation around that.”

“We’ve used the athletes to explain their own classifications. They’ve been green screened and we’ll use the latest graphics around those to tell their stories. We’re just keen that rather than just doing one or two AR graphics, we have a whole bank of classifiers which will explain each event”

Whisper is utilising some staff that worked with Olympic Broadcast Services (OBS) during the Olympics in Japan. Roberts explains why: “They don’t have to quarantine and they’re not quite as limited in where they can be because they’ve been there beyond 14 days. So we’re hopeful that that will allow some additional filming opportunities.

“But we’ve had to scale our ambitions back many times over the last 18 months as, so we’re hopeful, we’ve got a flexible model, and our contacts at OBS have been very helpful. By being in Tokyo with some additional presenting resources, we’ll have some athletes post-competition joining us for presentation and we’ll do our utmost to capture the atmosphere, but we’ve got the studio [in Leeds] as well which will capture how friends and family are watching in the UK so I think we’ve got both bases covered.”

Roberts comments on what is happening in Japan: “Our set up is a little bit of a hybrid. We’ve got two studio positions [in Tokyo]; one in athletics where Lee McKenzie will be based. We’re hoping to be in the athletics stadium a lot to do our presentation for the evening athletics and Lee should be joined by some GB athletes post-competition, so we’re making a real feature of being in Tokyo for that. At the swimming we’ve got a presentation position where Sophie Morgan and Giles Long will be pool-side, so that should be a real benefit for us to be able to capture some of the atmosphere. And at the track cycling we’ve got another position inside the velodrome.” 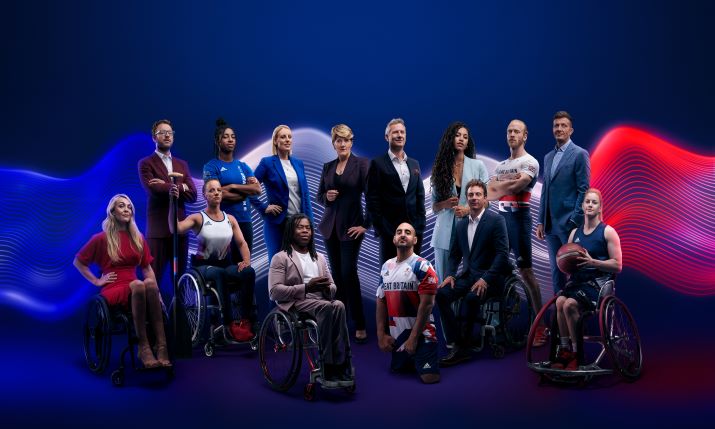 Whisper is also presenting a highlights show where presenter Ade Adepitan will travel around Tokyo in a taxi, going venue to venue to give viewers a flavour of the city. The cab will be fitted with point of view cameras to enable a James Corden, Carpool Karaoke-style programme view.

Adds Roberts: “There are more restrictions than you’d expect here, but we’re trying to push that filming as far as we can. Obviously we are very restricted [within Tokyo due to COVID regulations] and that’s why we brought the commentators back to the UK as other broadcasters have. When we were putting all these plans together, [the IOC] still said commentators have to wear masks. That stipulation has eased somewhat in the last few months and fortunately on screen [talent] don’t have to wear masks now, which is great news. But when we had to put our final plans together, they were saying everyone had to wear masks in the stadium. So that was quite tricky.”

Some of Whisper’s plans for coverage had to change due to restrictions in Tokyo. These included having microphones on some of the wheelchair rugby athletes. However, instead the team has put more resource into pre-filming with the athletes before they left for Tokyo, “and we’ve had some really, really nice in-depth films,” says Roberts.

Prior to the Paralympics, Whisper has got a good deal of footage in the can, filming with athletes training in the run up to the great event. This will enable the team to present athlete back stories during the event, painting a more complete picture for viewers. During the competition, it has a remote camera set up in the athletes village which will provide direct contributions from the athletes in the village pre and post competition.

Adds Roberts: “We’re in a good place in that we’ve got a lot of films in the bag already. We’ll be able to update with contributions from [the athletes] when they’re [in Tokyo] as well. And I think by having some athletes join us post-competition in Tokyo will also get a sense of what they’ve been through very quickly as well.”

In a new move, Channel 4 has opted to use the athletes themselves describing the Paralympic classifications, rather than its previous use of graphics. Roberts says: “We tell viewers what the classifications are all about, so we’ve got green screen classifier films with lots of athletes, which you’ll see during the broadcast. We’ve used the athletes to explain their own classifications. They’ve been green screened and we’ll use the latest graphics around those to tell their stories. We’re just keen that rather than just doing one or two AR graphics, we have a whole bank of classifiers which will explain each event.”

He continues: “However, we don’t want to impinge too much on the live sport, so we will be weaving in a narrative of classifiers and features and with watching friends and family as well, we’re focusing more on the human side, the emotional side, rather than just having graphical explainers.

“I think it’s just constantly finding the right place to put in the background stories and those classifiers about the events and the athletes, and just reinforcing to our commentators throughout to give us that background, because a lot of people won’t have seen para athletics for five years, potentially,” Roberts concludes.