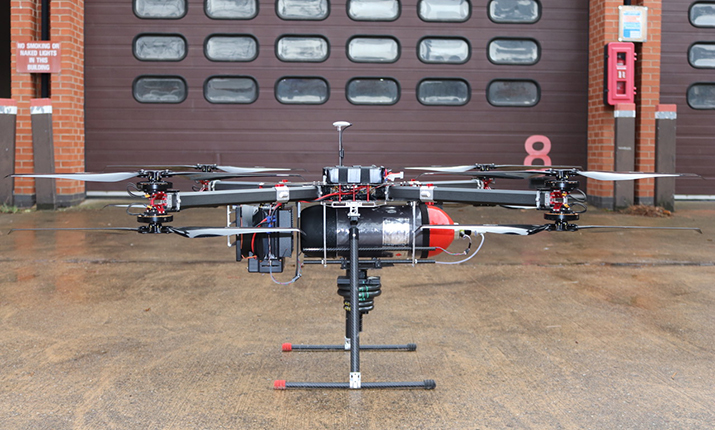 A new power system being developed by Batcam for UAVs could soon allow sports broadcasters to significantly extend the time they can film from the air.

Using hydrogen fuel cells, the innovation is said to provide drones with three times more flight time than batteries and has the added benefit of zero emissions at the point of use.

In a recent test, a multi-rotor UAV with a 5kg payload powered by fuel cells from Intelligent Energy successfully passed its original test flight target of 60 minutes.

The average flight time for a filming drone using Lithium Polymer batteries is currently around 12 minutes.

The breakthrough is part of Project RACHEL, supported by Innovate UK, and led by venture engineering company Productiv on behalf of UAV filming specialists Batcam.

Jon Hurndall, the chief executive of Batcam, said it was “great” to see a viable alternative energy source being developed:

“Lithium Polymer batteries are not only difficult and costly to transport internationally but largely inefficient in comparison to hydrogen. A 60-minute plus flight time with a large payload creates many opportunities, not only with our existing broadcast clients but in other commercial markets and sectors.”

Intelligent Energy completed the integration work on the UAV while Batcam advised on design requirements, project targets and piloted the test flights.

Productiv is providing programme management, business model planning, design for manufacture and supply chain optimisation, with the aim of having all components sourced within the UK.

David Woolhouse, chief executive at Intelligent Energy, added: “The advantages of fuel cells over batteries for our customers are clear; fast refuel, no vibration, quiet operation, zero emission at the point of use and three times more flight time than batteries. Fuel cells are a game-changer for the commercial UAV market.

The project will complete early in 2019.