Taking data to viewers on OTT for personalisation and interactivity 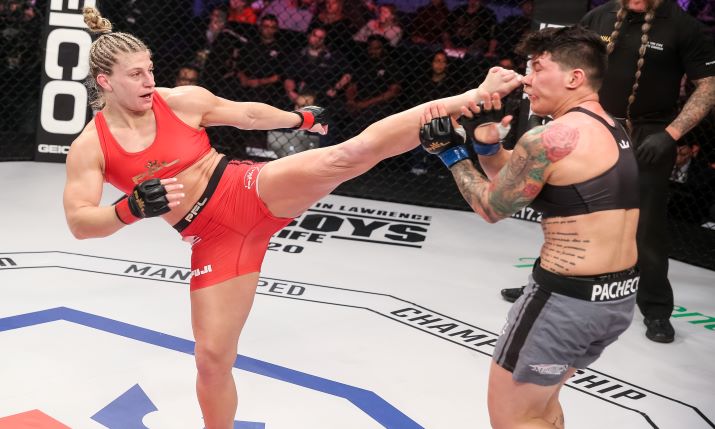 Two-time US Olympic gold medalist Kayla Harrison (left) has seamlessly transitioned from Judo to MMA and had become one of the best women’s fighters in the world. Her unblemished run to the 2019 PFL lightweight title ran her pro record to 7-0

The Professional Fighters League (PFL), a US-based mixed martial arts (MMA) organisation that launched just two years ago, has advanced its roadmap for expansion with the launch of a new over the top (OTT) app to take its cage fighting champions global.

With Europe a key target in the PFL’s sights, the app – PFL MMA – is a free to use download available on Apple TV, Roku, Fire, Android, and iOS devices, based on the ViewLift platform.

Peter Murray, CEO and board member of the PFL, spoke to SVG Europe about its expansion plans into the European region, and the use of data to innovate on its new OTT app for increased fan engagement.

Murray stated: “We see an incredible opportunity to continue to grow the PFL, in particular outside of the US. Europe is a priority region and that’s because of the fan base; combat fans in Europe and the UK are familiar with the sport, they enjoy the sport and they have demand for additional premium content, and that’s where the PFL comes in.

“We’re in the process of growing the league, building our awareness and driving engagement, and the launch of OTT now gives us the opportunity to go direct,” he added.

The OTT app is part of moving this young league forward. Murray explained: “The OTT platform and going direct to fans has been part of our long term business model. We launched two years ago and the focus was to establish the PFL brand and our format, our true sport [format]. We’re the only MMA organisation to ever stage a Regular Season, Playoff and Championship. So that was really job one. The team was really up to the task and delivered a premium, innovative product that fans have sparked to, and our audience is growing.”

The inaugural season of PFL debuted on 7 June 2018, and while the third season was called off completely due to the COVID-19 pandemic, Spring 2021 will mark the beginning of the PFL Regular Season, followed by the Playoffs in October, and the World Title Championship on New Year’s Eve. 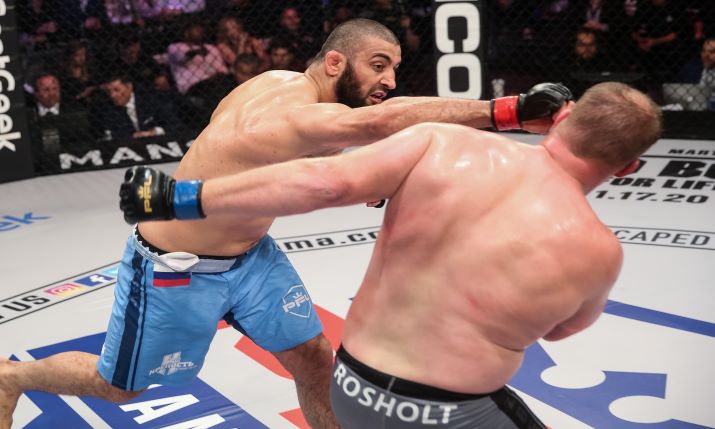 2019 PFL Heavyweight Champion Ali Isaev (left) of Russia accepted his title belt on New Year’s Eve 2019 after his fourth round TKO of American Jared Rosholt in New York City. The former Olympian is 9-0 as an MMA fighter

Murray continued: “Now that we’ve established format, we have more work to do and to continue to refine the product and expand the offerings. Now it’s the natural evolution for us, the next phase in our business model, to expand beyond [being a] live event company in MMA to an actual destination for combat fans, and [to that end] we’re now positioned as a multi-platform media company versus an event company. So it’s critically important in the role that OTT will play in growing awareness, driving an increase in ongoing engagement and monetising the PFL IP.”

However, he added: “It’s not just about the event; it’s about what gets [the fighters] there. It’s about what gets them up in the morning and training. And we cover all of that at the PFL. Beyond the action in the cage, we’re storytellers. To grow the sport and to grow PFL, we tell great stories.”

Linear channels are still important for PFL, said Murray, although he sees OTT as the future of fan engagement for the PFL. He explained: “My view is there’s always a role for linear, at least in the foreseeable future, particularly for properties such as ours. We’re early in our life stage and when you bring linear into the fold, it creates big events, big promotion, combined with digital engagement. But now with OTT, you really have the opportunity, beyond those live event moments, to engage every day, and for the fans to curate and experience for themselves.”

The PFL is an innovative league using technology in a way other MMA organisations are yet to try. It has developed its own proprietary SmartCage technology to deliver real time fighter data and analytics, referred to as ‘Cagenomics’. This Cagenomics data is set to provide a new level of interactivity and engagement for fans over the OTT app, Murray claimed.

He said: “We want to be ahead of the trends in terms of how fans engage on a mobile device with our product, and more broadly, with combat.

“Our cage is trademarked SmartCage and that really speaks to our technology platform, where we can integrate real time, live athlete performance, measurements, data and analytics,” Murray explained. “As an example, we were the first ever [MMA league] – on every fighter in every fight – to show real time punch strike speed. We rolled that out last year in addition to other fighter tracking real time integration into broadcast data and analytics.”

He went on: “Next year we’ll be continuing that innovation under Cagenomics and we’ll be the first ever to roll out kick speed on every fighter in every fight next season.”

PFL is also working on technology that measures the heart rate of an athlete against the calories burned, called ‘The Burn’, so viewers can see how many calories an athlete in the cage is burning versus their opponent, and therefore who is working the hardest. This data will also create a toolset for the fighters themselves, in terms of preparation for matches.

Murray and his team are looking at innovation from the perspective of personalisation. He said: “We’re looking forward to giving fans the opportunity to curate a live experience; if a fan wants to simply focus on one fighter with different camera angles to enhance the linear viewing experience, we’re going to provide that. We’re also going to provide real time live data and in context to the athlete’s performance, that’s not programmed on linear, bringing a more immersive experience for fans.”

He added: “We’re super focused on monitising our IP, including the data. As we look at the opportunity in gaming and where that’s going, around the world and here in the US, we’re playing some catch up, but we’re looking at what we deliver to fans who are also fans of betting on live sport and MMA.” 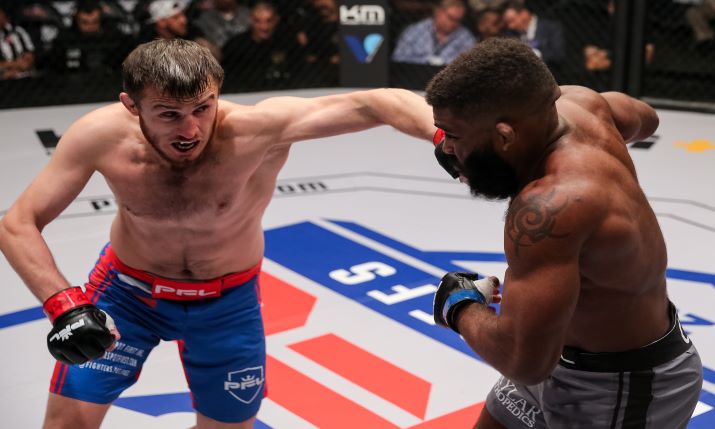 Russian Magomed Magomedkerimov (left) has been a force since arriving in the PFL. The 2018 welterweight champion is 8-0 since joining the league and was on his way to back-to-back titles when he was forced from his 2019 playoff bout with an injury

The UK, France and Germany are priority regional targets for the PFL’s OTT offering, followed by Russia, where 12 of the league’s athletes come from, including its 2019 PFL Heavyweight Champion, Ali Isaev. China and India, as well as Latin America, are also targets. PFL plans to bring some of its live events to Europe as part of its audience engagement plans.

Live PFL events are distributed to 160 countries including throughout Europe, on both linear and digital channels. “Now, with OTT, we really have a direct relationship day to day with the fan in all regions of the world, as well as [the ability to] customise their experiences,” Murray noted.

ESPN is PFL’s distribution partner in the US. In 2019 ESPN saw viewing audiences for PFL live events rise 50% on average, per event. The coverage of the Championship – held on New Year’s Eve in December 2019 – was up 100%. The Championship was the PFL’s last event to date due to the COVID-19 pandemic.

ViewLift is the technology provider for the PFL’s new OTT offering. It is a full service digital content distribution platform, with a major focus on sports organisations.

The timeline for launching an OTT offering on Viewift’s platform is between one and six weeks, so, said Rick Allen, CEO at ViewLift, speaking to SVG Europe, “our time to market was also a huge, huge advantage to PFL”.

Allen went on: “They were ready to go. There will be ancillary development and customisation as things go forward, but [PFL] wanted to start to get this great content out there right away, and so that speed to market was a big advantage for them.”

He added that the company’s global reach is also aiding PFL in its global ambitions: “We’ve been streaming content for ourselves and for clients since 2008 to every country in the world and we have a London office which is a centre for our presence for the UK and continental Europe.”

Allen went on: “We offer a true end to end platform to our clients. That’s a term a lot of people use, but it’s a capacity that we have. If they’ve got the content, like PFL, whether it’s these new series or historic fights of past seasons, or new fights looking at next season, they’ll be able to bring that content in, ingest it, encode it, in the cloud, on our system, associate it with all the necessary metadata, distribute it to every device they wish to distribute it to plus to their distribution partners, to social media and others, and monitise it any way they want. In a single provider they get everything they need and every ability they need to be successful.”

The app provides fight fans with access to hundreds of hours of premium PFL content wherever they are, with no restrictions.

In addition to event replays, fans will enjoy original storytelling from PFL Studios, a fully integrated global media division of the Professional Fighters League producing original MMA content for all platforms including television, digital and mobile. PFL Studios, a new content division at the League with a focus on original programming outside of the cage, was launched in June this year. All long-form PFL Studios content is being by 16-Time Emmy Award-winning producer and director George Greenberg, while PFL chief digital officer, Daniel Ghosh-Roy, is producing short-form content across digital platforms.

PFL US broadcast partner, ESPN, will distribute the original series for 2020 across ESPN platforms, including a six episode docuseries on MMA legend and PFL broadcaster, Randy Couture.

The league will monetise the OTT platform through sponsorship and advertising opportunities for brand partners, in addition to micro-transaction purchases for fans tied to gaming and exclusive content, rather than subscription at this point.

Before joining PFL, Murray served as VP global brand and sports marketing at Under Armour, where he was responsible for signing heavyweight British boxing champion, Anthony Joshua, to the label. In this role, he was responsible for category management of football, baseball, basketball, soccer, combat, and Olympic Sports.

Prior to Under Armour, he was co-founder and CEO of Insignia Sports Agency and EVP marketing and new business at William Morris Endeavor. For the previous 13 years, he was also a senior executive at the National Football League, including roles as SVP of business and content development, SVP of global brand partnerships.