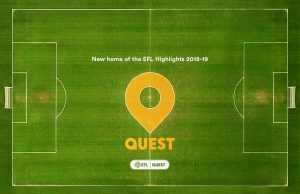 The English Football League (EFL) has sold the UK highlights rights for its various competitions to Quest, the Discovery-owned free-to-air channel.

From 2018/19 season, edited coverage of the Sky Bet Championship, Sky Bet League One and Sky Bet League Two, as well as the Carabao Cup and Checkatrade Trophy, will be produced by Eurosport and made available on Quest.

The four-year deal, which was first rumoured back in February, will see Quest broadcast 90 minutes of league match highlights and analysis each week, hosted by presenter and Liverpool fan Colin Murray.

The Saturday night EFL highlights are currently aired on Channel 5 in the UK, produced by ITN Productions.

As part of the new deal, Quest will also broadcast 10 hour-long highlights shows featuring action from every round of midweek fixtures.

Eight hour-long highlights shows will focus on the Carabao Cup and Checkatrade Trophy.

At the same time, in what is a first for the EFL, Quest will also produce ‘The Reaction’, a weekly interactive Facebook series also presented by Colin Murray. The show will “offer the opportunity for supporters to voice their views and opinions following the conclusion of the day’s matches,” the EFL said in a statement.

EFL chief executive Shaun Harvey said: “As an experienced broadcaster, clubs and their fans will be able to access high quality coverage on a channel that is committed to making the EFL highlights programme one of its flagship shows.”