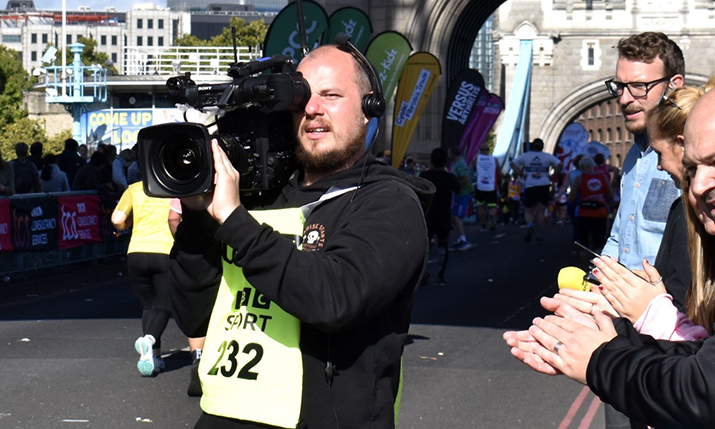 The London Marathon 2022 was packed with all the speed and thrills of the elite runner’s races, followed by hours of stories, drama and entertainment as around 42,000 people took on the epic challenge to run 26.2 miles through the capital’s historic centre.

Once again BBC Sport was host broadcaster for the race, supported by outside broadcast (OB) and technical services provider, EMG.

Matt Griffiths, BBC Sport series producer and lead director on the 2022 London Marathon, spoke to SVG Europe about this spectacular event. On his strategy for capturing last weekend’s Marathon, Griffiths says: “The marathon is quite a unique thing; you have an elite race for some of the best marathon runners in the world at one end of the spectrum, and then all those ‘fun runners’, all those people running for the charity and for great causes and for great personal reasons. To have all those people, 40-odd thousand people running exactly the same course on exactly the same day, it’s quite a massive thing.

That goal was also the biggest challenge for Griffiths in bringing the Marathon to its global audience. He explains: “Well, to be honest, this is the first time I’ve done the whole race. For the last seven years I’ve been doing the finish and someone else has done the [whole] race, but this year I’m doing the whole race.

“The challenge is telling the story of the day. I think that’s the thing because it’s not just about who wins the elite race, it’s about all that colour and all the fun and the energy of the masses as well. It’s getting all that across. So I think both parts of that are equally as important; people want to know who wins the elite races, but they also want to see their friends and families finish. They all want to hear about those great stories and all those great reasons why people are doing the Marathon, which is as important as whether somebody breaks a world record or not.” 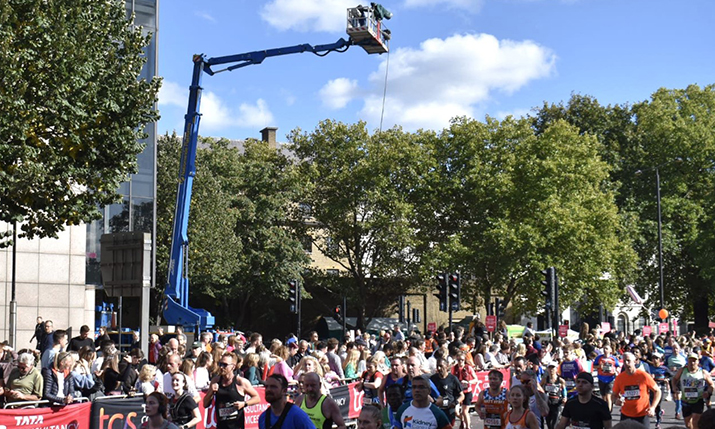 Hoist at the Tower of London, capturing the London Marathon 2022 action for BBC Sport

BBC Sport used five separate OBs from EMG for the marathon, each with its own director onboard, working under Griffiths. He comments: “We’re the host broadcaster, and we have a domestic running order that we do, which is serviced by our domestic production team. I was effectively in charge of the world feed, which was just the race, which is why the start’s [done with a] separate OB and the finish is almost a separate OB, because I pick those up when I need them to tell the story of the race, and when I’m not on them, they’re doing other things for our domestic programme.”

“It’s not just about the elites, it’s about all those people running for their own causes as well”

Each truck was positioned to get the best shots and to tell the story of the runners taking part. The first OB truck was positioned at the start of the Marathon at Blackheath, the second at Cutty Sark with five cameras including two jibs, and OB number three was at Tower Bridge with two jibs and a hi motion capture camera.

Griffiths notes: “The hi mo gets all those lovely kind of bobbing head shots and all that kind of thing and the jib makes the most of the lovely views of Tower Bridge and surrounding area.”

New for this year was the positioning of OB’s four and five. OB four was at Limehouse instead of Canary Wharf, which enabled the cameras to cover the Rainbow Mile – new for 2022 – celebrating LGBTQ+ communities, which kept runners motivated and entertained on miles 14 and 21 as they doubled back on themselves over the course.

Here there were four cameras including one jib and one RF camera for the trackside reporter at Rainbow Row, making the most of the colour and the energy of the runners and crowds

Griffiths comments: “Obviously you’ve got the iconography of the Cutty Sark and then when you get to Tower Bridge, you got to make the most of the bridge, and where you are; you have people streaming over the bridge both ways because normally by the time your elites have gone, you’ve got the masses coming over, and then some people are finishing going back the other way. So there’s always loads of lovely pictures there.”

“From there they go to Limehouse, which is a new one this year. We used to have an OB at Canary Wharf, but this year the Marathon has put quite a lot of resources behind what they’re calling Rainbow Mile, celebrating LGBTQ+, so there’s lots of activation going on around there so that was really colourful and vibrant. It provides a way to get all the bobbing head shots [as runners double back on themselves] that everyone loves, and another way to tell part of that marathon story; that it’s not just about the elites, it’s about all those people running for their own causes as well.” 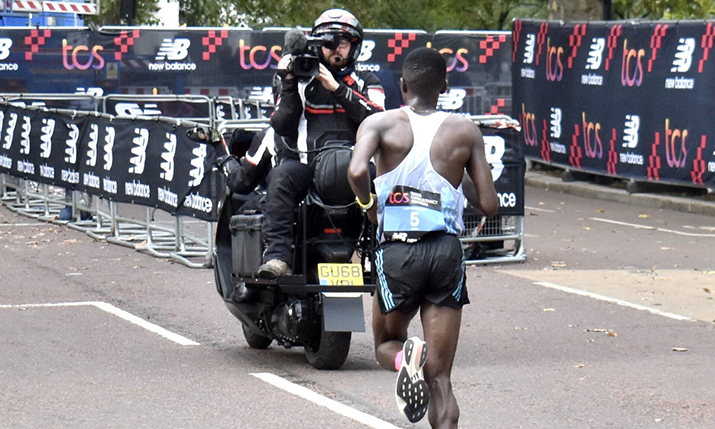 One of the bikes working for BBC Sport at the Marathon 2022, here tracking winner of the men’s elite race, Amos Kipruto who won with a time of 2:04:39

The final OB was on The Mall this year instead of Embankment, where nine cameras covered Birdcage Walk, The Mall and Buckingham Palace, plus two funnel cams capturing every runner to cross the finish line.

Griffiths comments: “We used to have another OB on Embankment. We don’t have that this year just because there’s loads of building work going on in Embankment so it’s looking a bit ugly, frankly, so we’re just going to be covering that on the bikes. Then we get into the finish and the finish again is another separate OB; there’s nine cameras on that particular OB so that sees them coming into Birdcage Walk for the last 800 metres of the race, round past Buckingham Palace and Queen Victoria Market (QVM) and then up The Mall.

“For the people running up The Mall we’ve got a hoist at the bottom of Birdcage Walk, and a jib by QVM that does a nice little sweeping shot around there. There’s a railcam that sees them coming up The Mall, and we’ve got a camera with a big lens on top of the finish gantry to see them coming down The Mall. There’s a hot head just in front of the finish line so we get nice tight shots of them finishing. There’s a high mo just behind the finish line so we get those lovely high mo shots of the winner.

“There’s also two funnel cameras as well because there’s two funnels [for runners to pass through] at the finish. There was a big huge gantry for the finish line – this year the London Marathon [have made it] nine metres long – and they had VIPs on top of it. There was a funnel camera on each gantry, so in each tunnel was a fixed camera, basically for when the masses come through, nobody gets missed; everybody who finished the marathon was seen crossing the line, and that was on all our digital platforms all day long, so from the minute the marathon started to when people were finishing, that was up on all the digital platforms up to 5pm, so if you had a family member running, you could watch them finish.

He adds: “Even if you’re running for six or seven hours, you should still get seen by the funnel cams. My wife did run it once and she did take six hours. She got beaten by a man carrying a fridge.”

BBC Sport also used two helicopters to get those stunning aerial shots of the race, as well as six motorbikes. 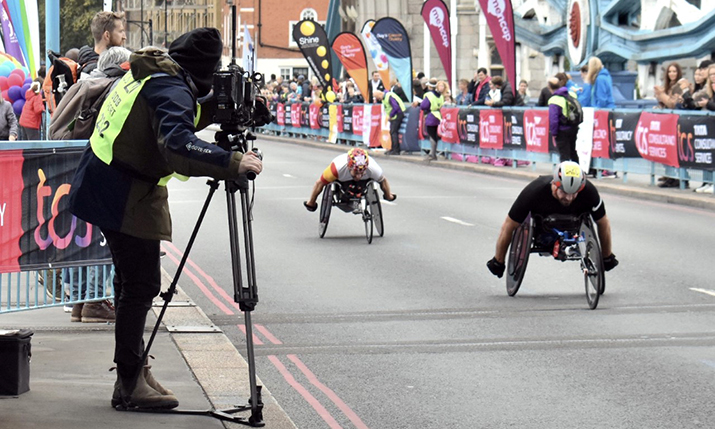 BBC Sport has no time to take a break after the 2022 London Marathon, as the 2023 race is back to its normal slot in the calendar in April, just a few months away. Here, wheelchair elite racers zoom over Tower Bridge

Concludes Griffiths: “It’s a big job. There’s been hundreds of people working tirelessly on this for weeks and weeks and weeks, and the fact that it’s come off the back of a number of other massive sporting events as well has not made it easy for us and EMG included; they’ve worked tirelessly with us.”

Yet there is no time to rest for the BBC Sport team and EMG. Next up, the London Marathon 2023 returns to its usual position in the calendar of April, now that schedules have settled following the pandemic. While this is good for runners, it means a frantic series of months for BBC Sport, which only has a few short months to get ready to do this all over again.

Says Griffiths: “We’ve now got the 2023 London Marathon to look at, which starts in April as it goes back to its normal time, so that’s not that long away,” he notes.

While the 2022 Marathon has included the repositioning of two OBs, which took considerable effort and negotiation with all parties involved to make happen, Griffiths hopes that the 2023 event will be simpler to plan: “We’re hoping we’ve ironed out all the kinks this year, and then April should be way more straightforward. (He said, fingers crossed!).”