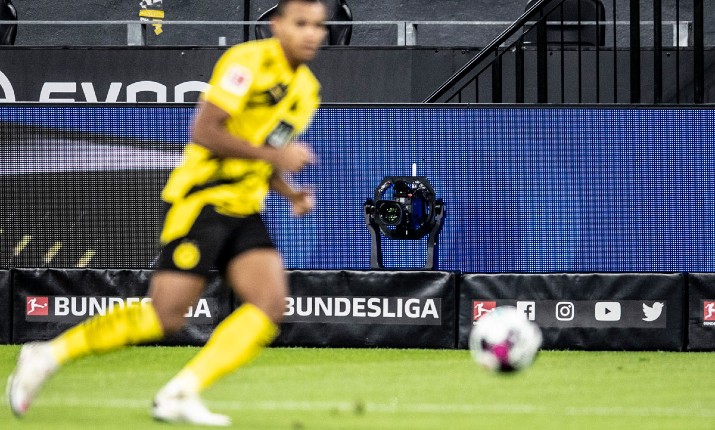 Sportcast, the DFL (Deutsche Fußball Liga) subsidiary that produces the world feed for the Bundesliga, has been trialling two new camera innovations on its match coverage: a Railcam that replaced the pitchside Steadicam and a Robotic camera system for single player tracking.

Both systems were tested on Borussia Dortmund matches, in fixtures against Schalke 04 and Bayern Munich on Matchdays 5 and 7 respectively of the 2020-21 season.

For the Railcam, Sportcast worked with the OB facilities provider TVN and Blackcam, a supplier of remotely-controlled camera systems.

The trial saw a 30-metre rail system installed along the sideline, between the pitch and the advertising board, extending from the coach’s technical area to the corner flag.

The Railcam tracked the moving ball, moving at a high speed of up to five metres per second but accelerating and decelerating smoothly.

The set-up, about 80cm tall in total, consisted of Blackcam’s B40 dolly camera system fitted with an ARRI SRH-3 Remotehead and a SONY HDC-P 50 UHD camera.

During the two live tests, the Railcam replaced the usual Steadicam and provided live images in UHD, shot from right above the turf line that were transmitted wirelessly and integrated into the basic match signal. 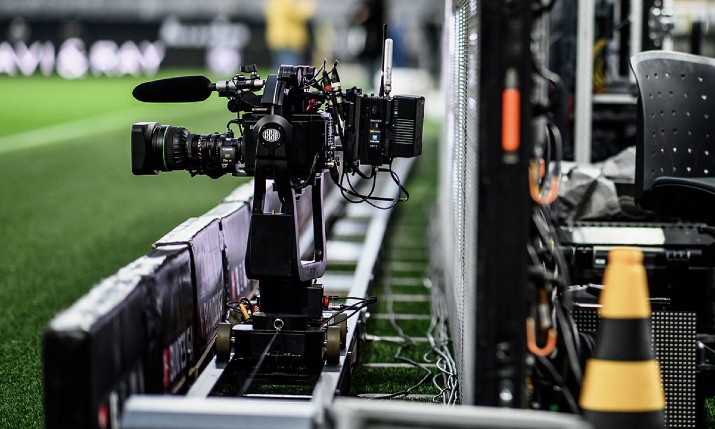 Tim Achberger, head of innovation and technology management at Sportcast, said it enabled “views from the turf line as well as camera countermotion and dynamic scenes, with the camera running alongside the players.”

Adding that “the additional perspective enables a new viewing experience of the dynamics of rapid moves, such as fast straight runs, in TV broadcasts.

“Even scenes happening on the opposite side of the pitch are consistently captured in high quality while maintaining focus on the players’ actions in the foreground, such as scrambles in the six-yard box before a corner kick, providing viewers with a multi-layered view of the match.”

The Railcam is controlled remotely by two operators positioned directly next to the rails but behind the boards from where they can fully focus on the movements on the pitch.

One of the operators controls the camera adjustments  – panning and tilting, zooming in or out – while the other runs the dolly up and down the tracks. 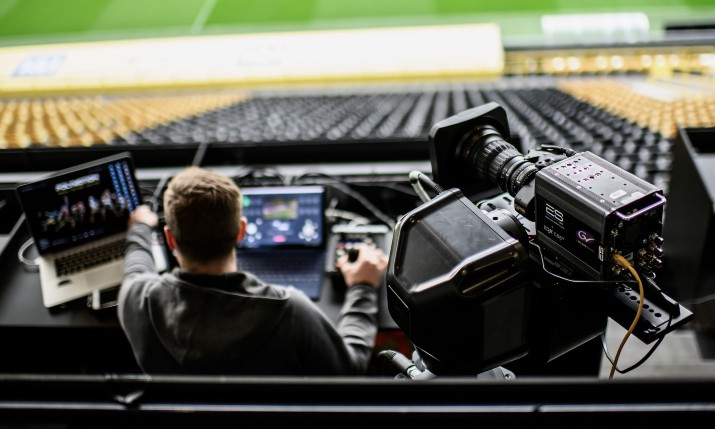 An automated remote camera system called Robotic Camera was also trialled. This focuses on one particular player, head to toe, following him around throughout a match everywhere he turns using tracking data.

All the camera work is fully automated and makes it possible to create individual and – importantly for international markets – localised content for media partners without requiring additional staff.

Two camera settings can be selected: The “Semi Close” view captures the featured player along with his surroundings, while the “Close” setting shows the player in close-up, head-to-toe view the entire time.

As the current testing phase continues, other camera settings and positions will be tried, as well, Sportcast said.

Robotic Camera output is distributed by live stream to DFL’s national and international licensees and can be used in various ways, for example, as an additional video feed, in clips, or for analytical purposes.

Similarly, additional camera settings can be made available when capturing players during warm-up, or to supply exclusive footage for trailer production.

Sportcast said: “The Robotic Camera can be installed in any position in a stadium. It opens many new options for fascinating perspectives which are controlled remotely.”

The trial system used a robot-controlled camera mount on a tripod and a Grass Valley LDX C86n 4k with a Fujinon HA18x5.5. It was located at the centre of the grandstand.

It was controlled autonomously by the “Polymotion Player” software developed by Nikon/MRMC (Mark Roberts Motion Control) at the stadium using tracking data.

The tracking data was supplied by ChyronHego. Nikon/MRMC can take over control of the Player software at the stadium from their London office at any time.

When the real-life test of the new Robotic Camera was performed on Matchday 5 during the derby between Borussia Dortmund and FC Schalke 04, the video was used by Viasport’s Bundesliga programme in Scandinavia.

The Sportcast trials took place at Borussia Dortmund’s Westfalenstadion on 24 October and 7 November 2020.