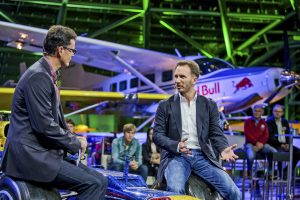 Commenting on the new relationship, David Ross, chief executive of Ross Video, said he hoped the project will be the first of many with Red Bull.

“Broadcast Engineers are usually a well-caffeinated bunch,” he noted.

“Anyone who has visited Ross HQ in Canada or any of our trade show booths will know that we’re big fans of Red Bull’s product; we’re thrilled that Red Bull Media House and Servus TV have now become fans of Ross Video, having seen how our ecosystem of solutions can bring more creative live content to viewers more efficiently, at a lower cost.”

Fabian Dorschel, global head of media technology and IT at Red Bull Media House, added: “Ross Video offers everything we need to improve our studio production workflows at Servus TV and for Red Bull Media House; we’re looking forward to moving into our new premises and going on-air with a brand new look and feel and a technical setup that’s more versatile while being more efficient and more cost effective.”

Ross Video will be on booth SL1805 throughout NAB.