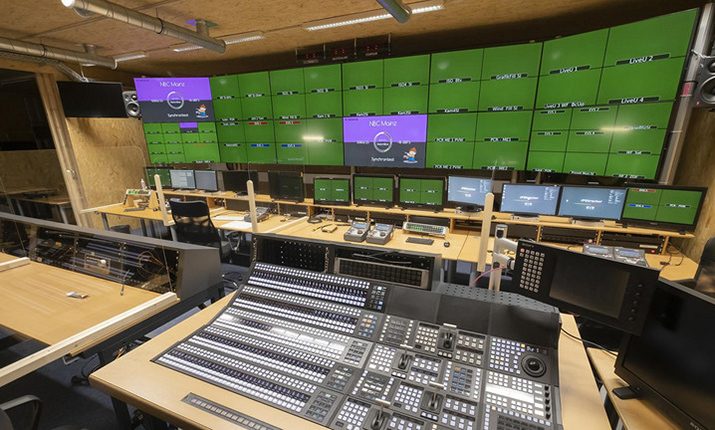 Coverage of the UEFA European Championship (Euro 2020) from the German public service broadcaster ZDF will be remotely produced and controlled from Mainz.

Studio presentation, as well as direction, technology and post-production, will be done from the “sportstudio-Arena” which is on the ZDF site in its home state of Rhineland-Palatinate.

The NBC (National Broadcast Centre), which is within sight of the “sportstudio-Arena”, will be the hub of the operation. It is from here that the entire broadcasting process will take place, taking in the match feed and other signals from the UEFA IBC in Amsterdam and supplementing them with its own wraparound coverage.

The NBC is equipped with ARD / ZDF-MPE technology (Mobile Production Unit) and connected to the “sportstudio-Arena” via a fibre optic cable.

The “sportstudio-Arena” on the Mainz Lerchenberg is handled by two control rooms in the NBC.

In the studio management, the broadcast signal is created from all game signals, external locations and the studio cameras in the arena. The second control room supplies the LED surfaces in the “sportstudio arena” with video signals.

As in the past, ZDF is also working hand-in-hand with its fellow German broadcaster ARD at Euro 2020. For example, at the IBC in Amsterdam, technicians from both broadcasters will combine to ensure that the world signal is reliably transmitted to the NBC and the broadcasting centre in Cologne

The control room presence at the IBC has been reduced to an absolute minimum, both in terms of technical equipment and personnel deployment.

ZDF editor-in-chief Peter Frey said: “Even if planning security has now been achieved at the venues: [Euro 2020] is under the sign of the pandemic and is influenced by the infection process and the progress of the vaccinations. In this respect, this major sporting event cannot be compared with previous European and World Championships.

“We have created our editorial planning and concepts accordingly flexibly so that we can constantly adapt them to the current developments in the corona pandemic and at the same time ensure that the health of the colleagues involved in the reporting has top priority at all times. This flexibility is necessary because the requirements of UEFA and the respective cities and countries count in the European Championship venues.

“However, this ensures that we have set up the NBC in our broadcasting centre 2 on the Mainz Lerchenberg, from which the transmissions are realised. And the ZDF EM studio will also be set up directly on the Mainz broadcasting site – in terms of production and editing, it will be a home game for ZDF with a view to the first European championship in several European venues plus an Asian city. The final on July 11, 2021 in London can be seen live on ZDF.”