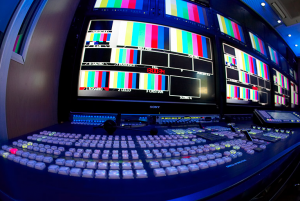 Inside one of Rewindm’s six-strong OB fleet

Rewindm is a television production company based in Naples and operating a number of mobile production units. Day-to-day, the company is engaged in capturing a wide variety of sports content – including Serie A football, volleyball, boxing, horse-racing and tennis – as well as entertainment, talk shows, documentaries, fashion shows and more.

All vehicles are designed and manufactured in-house. In the case of EXT HD 12, the vehicle was constructed on an Iveco 150E, a vehicle of nearly 10m in length, and features a specification including: eight TVLOGIC 17” and four Sony HD LCD 40” monitors; a Kahuna 2.5 ME video mixer, GUI interface and auxiliary panel; two matrix panels from Probel; two connected Probel Halo 32 video matrices; intercom technology from Telex; and Genelec audio monitors.

Camera lenses include Fujinon 87X, 72X and 18X, as well as Canon 21X, 22X, 17X and 16X. Also onboard are Sony cameras, distribution equipment from Harris, and embedders and converters from Miranda, among other technology.

The latest addition to the inventory, OB-Track 12m, features expansion capability and can work with up to 18 cameras – specifically, Sony HDC-1500s. Only part of the body section and mechanical structure were manufactured externally, since all mobile vehicles of Rewindm are otherwise designed, wired and assembled in-house.

All vehicles are also equipped with BLT and EVS equipment, while Canon lenses are widely deployed as well.