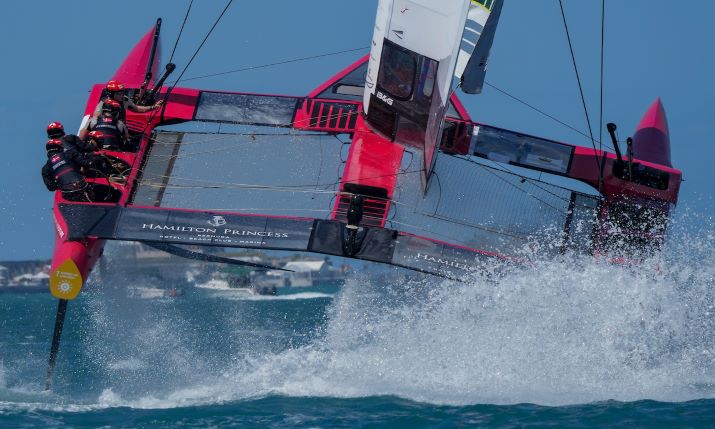 SailGP continued its Race for the Future in Taranto, championing a world powered by nature with the goal of accelerating the transition to clean energy. In the lead up to the first ever Italy Sail Grand Prix, which took place on 5 to 6 June, SailGP supported a bioremediation programme that’s contributing towards the sustainable future of Taranto, the host city of the Italy Sail Grand Prix.

SailGP is a climate-positive sport, delivering more positive impact than its footprint and focusing on local community engagement through collaborating with host cities to support projects focused on social and environmental sustainability.

In Taranto, SailGP worked with experts from the University of Bari Department of Biology and the IRSA-CNR (National Research Council Institute of Water Research) in collaboration with the ARCA Program (Research Ambassadors for Environmental Knowledge) to support the ‘Il vento in pioppo’ project. The project is committed to using nature-based solutions to help decontaminate the soil and plant poplar trees, which sequester carbon to help mitigate the impact of climate change. SailGP is funding the initial planting and management of 50 trees in five new sub-areas of the site.

Through the project, poplar trees will be planted to create a nature reserve and open-air classroom for schools in the area to use for environmental education. Located in the Contrada Cimino- Manganecchia on the site of a former 19th century weapons factory, the area subsequently became an illegal landfill with uncontrolled dumping of dielectric fluid. The resulting soil contamination from PCBs (polychlorinated biphenyls) and heavy metals (HM) are potentially harmful to the biodiversity of the unique transitional water ecosystem or Mar Piccolo; an important habitat for species such as herons, swans, ducks and wading birds.

The first trees were planted on 5 June to coincide with the first ever Italy Sail Grand Prix, in the presence of Taranto Mayor Rinaldo Melucci, SailGP CEO Sir Russell Coutts and representatives from local institutions. Further poplar cuttings are planned to be planted in March of next year. In two years’ time, the trees will reduce the soil pollutant (PCB and HM) concentration back to below the legal limit. In five years, the trees will become part of a biomass fuel source in the region, helping to reduce CO2 air pollution from coal fuel by 1.48 tonnes.

SailGP’s support is helping the work started in 2013 by the IRSA-CNR and the Department of Biology of the University of Bari which saw 600 poplar trees planted in a nearby contaminated area of this ecosystem, bordering the Palude La Vela Regional Nature Reserve. The result of this trial showed that it was possible to achieve extraordinarily positive results with a verified reduction of soil contamination.

Poplar trees are well-known for their significant ability to remove carbon dioxide from the atmosphere every hour, while releasing the equivalent amount of oxygen as well as degrading organic contaminants in soil and making heavy metals less toxic, reducing the risk of potentially harmful contamination entering the food chain via groundwater.

The ‘Il vento in pioppo’ project is part of a wide-ranging sustainable strategy that will facilitate soil decontamination and restoration to improve air, soil and water quality as well as the overall resilience of the Mar Piccolo transitional water ecosystem. Another key element of the project is its contribution to social restoration, with many of the volunteers coming from the refugee and immigrant population, providing opportunities for skills and training as part of the remediation efforts.

As part of the project, SailGP is also supporting the launch of the ARCA crowdfunding campaign ‘Adopt a Poplar’. Members of the public can make a donation to adopt a tree at the site. Their donation will support the ongoing tree planting efforts and management of the remediation project, which will be monitored and maintained by the researchers. A wooden plaque etched with the donor’s name will be placed on the tree, along with a digital certificate of recognition. Donors can follow the progress and evolution of the project via the social media channels of the ARCA Program and on a dedicated ‘Il vento in poplar’ web section.

SailGP CEO Russell Coutts said: “Taranto is a vibrant city that is undergoing a major transformation and in the last two years has shown commitment and taken concrete steps to strategically address its environmental challenges. SailGP provides all its host cities, including Taranto, with a fantastic platform to educate and inspire people to accelerate change towards a cleaner future. We’re proud to highlight the work of the municipality and the organisations behind the ‘il vento in pioppo’ in order to help intensify their efforts, raise awareness of the issues and highlight the steps that are being made to solve it.”

Taranto Mayor Rinaldo Melucci said: “When we chose SailGP as a partner it wasn’t just for visibility and economic effects, we chose the league led by Russell Coutts because we share the same values, such as championing a world powered by nature with the goal of accelerating the transition to clean energy just as all citizens asked of us. This project makes an effort to accomplish it and connect the race with all these values. I have to thank all the scientists involved and SailGP for their sensibility.

“Furthermore I’m more than happy to collaborate with SailGP, I believe I made a really good choice, by planting poplar trees we certify the commitment to the natural environment.”

Participation in the project is in line with SailGP’s commitment to UN Sustainable Development Goals 7 for affordable and clean energy and 13 for climate action.