Save the Date: SVG Europe’s FutureSPORT event set for Old Trafford on 29 November

SVG Europe is delighted to announce that our FutureSPORT 2018 summit will take place at Manchester United’s Old Trafford stadium on Thursday 29 November.

Registration for the event and full programme details including all speakers and sponsors will be announced shortly: in the meantime, the provisional content programme can be viewed below. All sessions are subject to change. 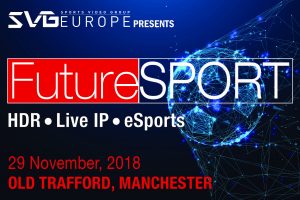 FutureSPORT will explore the key technology innovations and major workflow challenges that will shape the future of sports production across Europe in 2019. The entire media ecosystem is hurtling into a new era of consumer behaviour and the sports production faces its own unique set of challenges and opportunities.

SVG Europe heads to Manchester in November to delve into the future, with a programme that will include such hot topics as High Dynamic Range, the challenges of moving to live IP production and the rapidly growing phenomenon that is eSports.

The 2019 Rugby World Cup will be held in Japan from 20 September to 2 November – the first time the event takes place in Asia. Twenty nations will battle it out during the six-week tournament, culminating in the final at the International Stadium Yokohama in Kanagawa. This session will explore the logistical and operational challenges faced by the Host and by European broadcasters as they plan ahead for this major international sporting event.

Industry and consumers alike agree that the increased contrast afforded by high dynamic range (HDR) — with its darker blacks and brighter whites — adds hugely to the televisual viewing experience, making pictures more realistic and even more immersive. But while standards are in place and the creative desire is obvious, HDR is only commonplace in post-produced content. With compatible consumer technology still rare, live HDR still has technical, logistical and commercial obstacles to overcome, whether it’s married to HD, UHD or mobile. In this panel session, experts will discuss where we are with live HDR for sport, what we have learnt so far and what potentially happens next.

The broadcast industry is by now well aware of the benefits brought by IP technology. However, the speed and extent of IP migration is yet to be determined for many broadcast operators. What are the considerations when deciding on an IP infrastructure? What do you adopt and how do you scale? Strong inroads have been made — especially in live sports production operations — so what can we learn from those experiences and what are the remaining challenges in making that full IP migration?

How do you get seven separate sports to agree to participate in a single sporting spectacle, in two cities, broadcast to a cumulative TV audience of over one billion viewers? And add in some major broadcast technology trials on top of the already innovative broadcast and digital coverage? All will be explained as our panel looks back to 11 hugely successful August days at the 2018 European Championships in Berlin and Glasgow.

eSports is growing rapidly, both in terms of the number and quality of sporting names involved and also the audience, which is undeniably massive. The majority of premier sporting clubs and federations are in the process of immersing themselves in the world of eSports, as the audience figures and demographics for early movers into this virtual universe speak for themselves. In this session, we talk to leading proponents of eSports on why they have become involved, and how this area is changing not only the future of their sport but the nature of engagement and viewership.