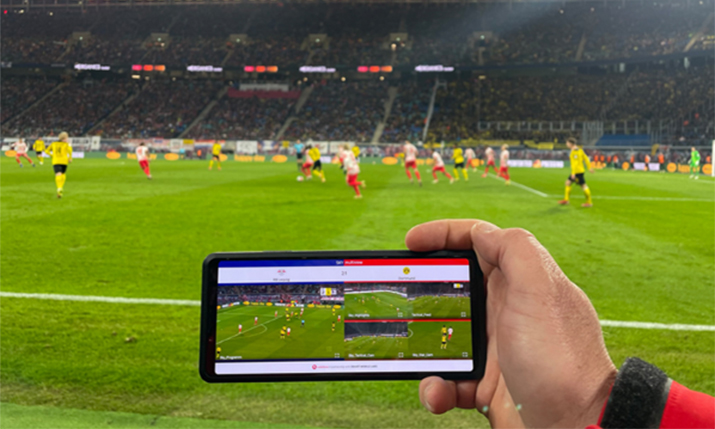 Sky Sport implemented a 5G business to business proof of concept (PoC) trial for the Sky Multiview App in cooperation with Vodafone at the Bundesliga Match of the week, Leipzig versus Dortmund

As part of Sky Sport’s 5G activities, it implemented two successful 5G cases. On 6 November with Vodafone at the Bundesliga Match of the Week, Leipzig versus Dortmund at the Red Bull Arena, an in-stadium app was trialled, and on 10 November with Telefonica O2 at the handball Bundesliga Match of the Week Flensburg versus Berlin at the Flens-Arena stadium, the focus was on an end to end cloud production, building on a similar trial carried out by Sky Sport and O2 last year.

Sky Sport implemented a 5G business to business proof of concept (PoC) trial for the Sky Multiview App in cooperation with Vodafone at the Bundesliga Match of the week, Leipzig versus Dortmund.

On the in-stadium app, Reitano comments: “You’re watching the match and while you’re watching it we are offering you five different feeds, so programme highlight, tactical feed, tactical cam, and more. The magic is really that when you tap on one of those feeds, you have a latency of below one second.”

“Normally you can’t send even a text message out of a full stadium, but now we’re here experimenting with five streams over 5G; you can discuss video assistant referee actions and everything.” 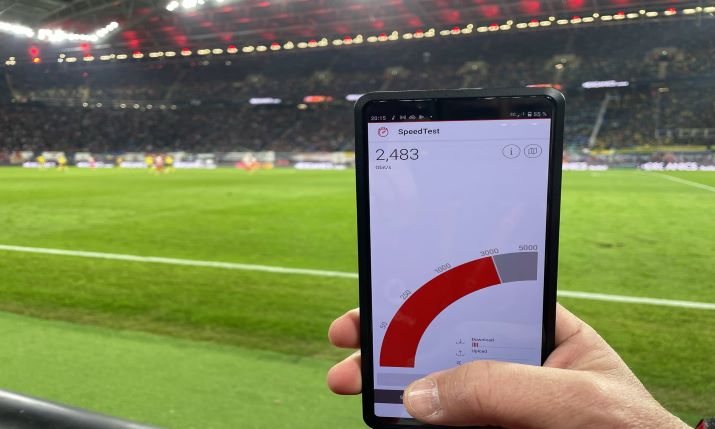 This Bundesliga trial between Sky Sport and Vodafone was the first PoC of its kind in Europe based on mmWave technology (26Ghz, creating the fastest possible 5G network)

“At the end of the day, 5G opens up – from my point of view – more value for the customers and will definitely be something we’ll see more of in 2022 onwards, I’m 100% sure. And that’s why we’re testing”

This was the first PoC of its kind in Europe based on mmWave technology (26Ghz, creating the fastest possible 5G network). Says Reitano: “This is the next step on how we might deliver in the future a new and great in-stadium experience – highlights, data, graphics – for our Sky customers while they watching a live match, in person.”

Says Reitano: “Our learnings from this trial were that we experienced a stable performance over the 5G network provided by Vodafone. We were able to add value for people in the stadium through curated content that could be accessed with an astounding minus-one second latency. We are now planning further testing to take place during 2022 to help drive the in-stadium experience theme.” 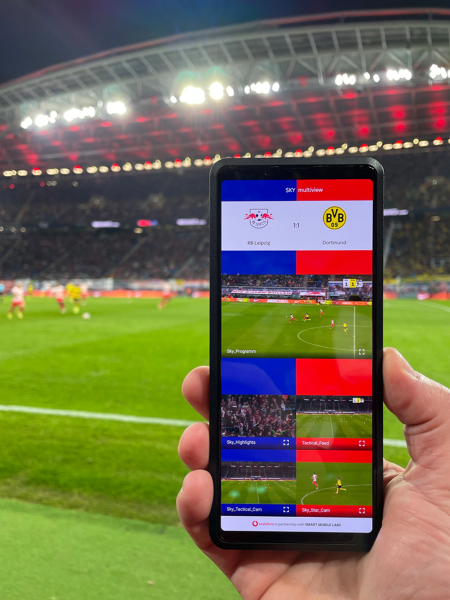 Reitano notes: “It is pretty much the same set up we did last year using smartphones [to broadcast a handball game over 5G]. But in this case, we’re using four smartphones and also four broadcast cameras [over 5G], so we are ramping up the quality of the feed because we’re using broadcast cameras, to, let’s say, give us more upload, and we are creating a whole end to end production in the cloud with this.”

The provision of the production system in the cloud was delivered by Vizrt, and the streaming units were provided by LiveU. Sky Germany used Vizrt’s Live Production Solution featuring Viz Vectar Plus for switching, Viz Libero for sports analysis, and Viz Engine and Viz AR for graphics, all through the cloud. The Vizrt tools were facilitated by NDI, specifically the recently released NDI Bridge feature that brought the programme feed from the cloud back to the handball venue

Vizrt worked seamlessly with LiveU, ensuring that the production was near zero latency, scalable, all with an enhanced quality.

Reitano comments on what sky Sport learned with this new handball trial: “We are very satisfied with the output. We were able to significantly improve the quality of the stream by using broadcast cameras. The processing in the cloud worked smoothly. Of course, there are always learnings and further developments within the scope of such projects, but we were surprised how seamlessly the production workflows were handled in the cloud.

“We will continue to process further productions in this framework in 2022 in order to push ahead with the transformation.”

As to why Sky Sport is pushing the use of 5G for live sports broadcasting, Reitano says: “At the end of the day we have a good situation here [in Germany] with telco companies who are pushing 5G very hard at the moment. So there’s the pure infrastructure point of view where 5G is on their radar, which helps anyway. And from our point of view, we have two intentions.” 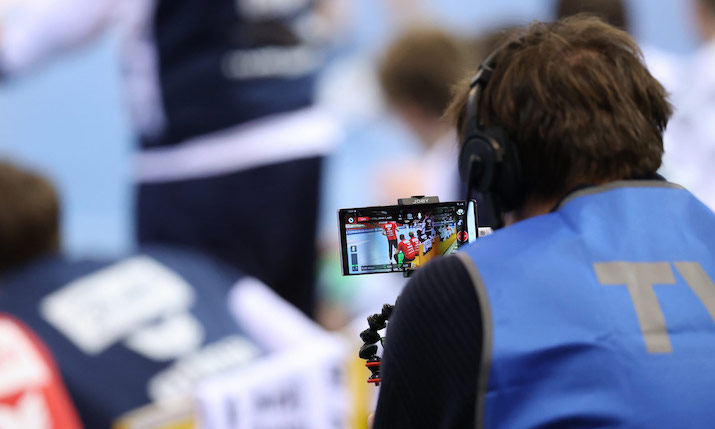 On 10 November with Telefonica O2 at the handball Bundesliga Match of the Week Flensburg versus Berlin at the Flens-Arena stadium, the focus for Sky Sport was on a 5G end to end cloud production

He says one goal behind Sky Sport’s experimentation with 5G is its potential to enable the production of live sport and news in a more economic manner. “The first reason is what can we do with 5G to produce [content] in a more light-footed way, and [that will also help us produce] lower tier sports productions where we don’t want to send out OB vans anymore, where we don’t want to send too many people, but where we instead can produce with a backpack and someone [can use a] laptop and a video control system in the cloud, and then produce content.

“We can really see that there is a demand from lower tier leagues to produce content, and 5G gives us a solution that would certainly make it possible to handle smaller productions in this way in the future. [Another related area] is how we can use 5G in our news environment, so how [reporters can] contribute and distribute content. These areas are all purely very eco-driven; how to produce content in a much more productive, effective way, with a lighter footprint.”

Reitano says that the second reason is to see how 5G can enable the broadcaster to implement new in-stadium applications to attract existing Sky customers to an enhanced product, as well as to bring new target groups to the brand. He explains: “The other thing that is also very interesting is the in-stadium experience; how to create a new market and create new business streams.

“We think, especially around the in-stadium experience, if you have a Sky subscription you can watch on a stream at home, but we could also [give you] the same experience [on the smartphone], in the stadium, so we combine two worlds. If you’re sitting in the stadium watching your team live with the football match and all the emotions, and in parallel as a Sky customer, we can offer you more value where we are producing content [for your phone], specially created around this match in the stadium, this could be very beneficial for future revenues.”

Time to get involved in 5G trials

It is important for broadcasters to be involved now in 5G trials, even though it is early days in the technology’s rollout, states Reitano. He comments: “The Red Bull Arena [Leipzig] is the only stadium so far in Germany equipped with this powerful 5G network, but it is only a matter of time before the other stadiums are also equipped with 5G. However, you have to start somewhere, starting now to test new workflows, to find some proofs of concept, and to identify where do you want to go. At the moment, unfortunately, everyone talks about 5G being the holy grail for everything, but it’s really tough to tackle at the moment.”

Telecoms companies are interested in exploring how sports broadcasters can make use of 5G, says Reitano: “If you come to 5G in the broadcast, television and media environment, at the end of the day you need specific business cases to explain to the customer what 5G is enabling them to do. For pure telephone calls you do not need 5G, but if you want to have proper applications – if you want to watch video in a full seated stadium of 70,000 people and you want to have it without any latency – you definitely need 5G.

“You need both the telcos and broadcasters to enable the power of 5G. This is something we have to work on at the moment,” he continues. “This is really early adopter days, but that’s why we have started here in Germany a little bit earlier than others. I realised that we have so many telcos at the moment in Germany who are working on 5G and they have opened up all the frequency discussions, and that’s why we are on the forefront here [in Europe] at the moment [for testing 5G business cases in sport]. Let’s see how it goes.”

He concludes: “We’ve identified some good playgrounds [for 5G] now with services in the cloud, but also now with this use case of an in-stadium experience, which is totally new. I think if you want to sell more content to customers and give them more benefits, this could be really helpful.”