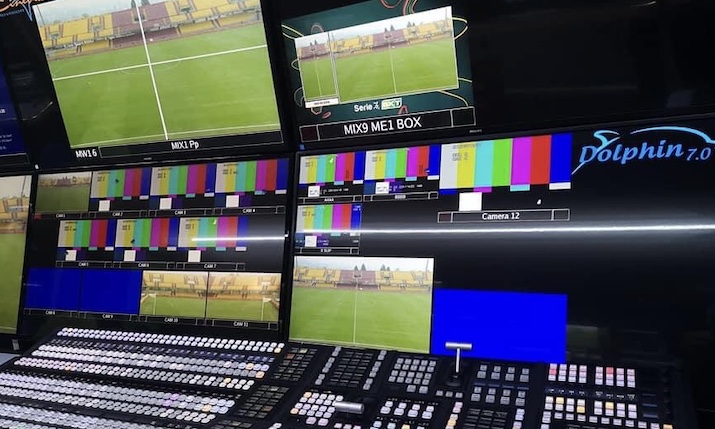 Cinevideo’s Dolphin 7 truck was on site for the match

When Lega Serie B entrusted all the production of Italian Serie B football matches to Sky Italia, the pay-TV broadcaster immediately suggested producing some events in 4K. On 1 November, also known as B Day, the meeting between Benevento and Brescia at the Stadio Ciro Vigorito became the first Lega Serie B match to be shot and broadcast in 4K.

An excerpt from the official statement that accompanied the day stated: “In this way Lega Serie B intends to give special meaning to the B Day of 1 November, a day entirely dedicated to the Series, giving definition that is four times better than that usually produced in HD.”

Before the event, president of Lega Serie B Mauro Balata declared: “The modernisation and enhancement of the BKT Series product continues, which for some years we have been trying to make more international, attractive and in step with the needs of the fans.

“It will not be the only match broadcast with the highest definition, others will be added in the coming months to make the Italian championship more and more appreciated, which for the quality of the protagonists is increasingly followed all over the world”.

The production was made possible with the assistance of Cinevideo, which fielded nine Sony cameras as required by the production standard of all Serie B games, but this time in 4K.

The nine cameras on the pitch were deployed according to the typical camera plan that takes its cue from Serie A: cameras one and two are positioned in the grandstands to capture long shots and the game details in the narrow shot from above; camera three is in a ‘flat’ configuration in the centre of the field, cameras four and five are on the 16m lines, the reverse camera six is in the centre of the field, then a rear goal camera is placed at the top of the goal and two Marshall mini cameras are also in the goal.

For audio recordings, each camera in the field had its own microphone and a dozen additional mics were placed in other strategic positions on the field to create the ambience that enables the production of a final feed in stereo but with excellent depth.

The signal produced in 4K was conveyed via fibre to Sky’s production centre, while Cinevideo also guaranteed the delivery of HD signals useful to other rights holders such as Dazn and Helbiz.

Returning to 4K, the signal was processed by Sony HDRC-4000 production converters to derive the interlaced HD feed.

Cinevideo employed one of its reference mobile vehicles for this event, the Dolphin 7.0, which is also utilised on Serie A games. It is able to manage up to 24 4K cameras controlled by the Sony XVS-8000 4K video mixer; on board the EVS XT-Via takes care of the replays, here used with 12 channels. 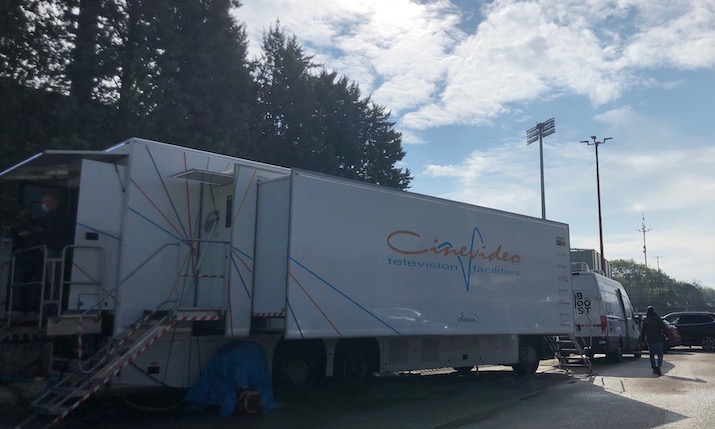 Dolphin 7.0 is a fully UHD OB truck that can accommodate two separate productions in the same vehicle but in differentiated and optimised areas. Utilising the Sony XVS-8000 and Calrec Artemis audio surface, it is capable of producing Dolby 5.1 and Atmos.

It can accommodate 35 people in production or create dedicated spaces to comply with COVID guidelines. Twenty people, including technicians and the creative team, were engaged for this event.

The 4K television graphics were created by Boost, an EMG Group company which, in addition to taking care of the development of the graphic layout in agreement with Lega B, worked on site in one of its UHD mobile vehicles.

In addition to delivering the graphic signal in UHD, Boost also provided the usual service in HD 1080i through the remote playout system present at its production centre in via Deruta.

Andrea Buonomo, Cinevideo technical director and executive sales manager, comments: “In 2018 we were involved in carrying out UHD HDR tests on behalf of Sky Italia on the Serie B championship and today we are happy to have taken part in a historic event that marks an important change in the quality of the Serie B product.

“This is a very important moment because the Lega Serie B is determined to grow its TV product and make the most of it and on this occasion they wanted to prove it.”