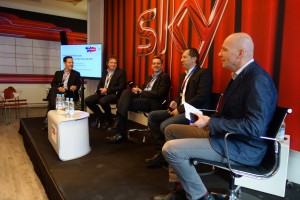 The extent to which audio can be an innovation incubator and what live sports will sound like in the future were some of the key issues that German industry experts discussed at the Sky Sport Summit, which took place in Munich recently and was organised in cooperation with SVG Europe.

“Audio first”, emphasized Philipp Lawo, CEO Lawo AG, who is convinced that the added value which audio can offer is much more than the further development of surround formats such as 22.2 or immersive audio. “The real added value will be to arrange the signals and the acoustic event up to the consumer. The entire production and distribution chain needs to function.” If that works, there will be an added value which will go beyond the room acoustics.

There are various applications that can provide an added value such as choosing the commenator in the preferred language, position him in the venue, adjust the loudness of his voice, and even integrate user generated content. “We are all aware of the emotional impact that audio can have. We like to listen to music and to attend concerts, but in the sports sector this issue is underrated,” says Peter Claussen, COO, Senheiser Electronic. “I think that audio has a huge potential to bring much more emotionality to an event.”

The Next Generation Audio (NGA) addresses issues such as a better downmix, more dynamic range control, and an improved management. But 3D audio can even envelop the consumer and give him or her the opportunity to influence the audio experience.

In the triangle of accessibiity, immersive and personalisation, the user has many choices. He can position the commentator in a different way in the stadium but also add user generated content via Skype, the fan block, or even the heartbeat of the soccer player during the spot kick.

“We are providing the technology and the toolset,” underlines Arnd Paulsen, manager Broadcast Systems Dolby Germany. “We need to define this new audio experience and use the creative possibilities that the technology offers. If the user can choose between various sound channels, it can be an added value to be very close to the coach. There will be completely new functionalities which have never been available before.”

In Germany, Sportcast is implenting innovative audio solutions in stadiums. “In 2015, we started an innovation game where we are also testing technologies,” explains Alexander Günther, general manager, Sportcast. In the last couple of months the entire production chain has been tested, including the audio sector with all components such as the microphones and signal routing in the stadiums from the OB van up to the production centre in Cologne because the national as well as the international feed will be equipped with 3D audio “The results of our tests on the production side were positive,: says  Günther. Meanwhile, there are 12 soccer stadiums linked up to a cable network. “We are gradually going to equip the stadiums with surround microphones and a permant cable system.”

While in terms of production almost all is set, the qualifications of the operators also need to come along with technical innovations. “In the next season we will put a special focus on the audio supervisor and also accelerate his issue at the OB van,” Günther points out. “It also needs to be discussed, which are the use cases on the side of the consumers.”

In the US there are fewer regulations when it comes to the positioning of the microphones. Even if the fans are screaming loudly, the audio signal that covers the ball can always be filtered because the player in the centre has a microphone in his back. “If the user has 27 opportunities to choose an audio signal he won‘t pick the best one. Therefore we will need a kind of an expert modus,” says Claussen. “We need to look at audio the same way as we did at video which is available on any kind of handheld now. In 15 years from now this might be the same with audio content.”

Until now, audio always came secondly, states Günther. “It is an important step [to] weight all video, audio, data and graphics equally as components of media production.”

The market introduction of innovative sound formatS are a kind of a chicken-and-egg problem, suggests Paulsen. “The implementation of an advanced audio format requires a certain market coverage. In 2012, Dolby brought Atmos to the theatrical market and launched it at the home entertainment market in 2014, but only about 20 percent of the consumers have such a home cinema installation. Technically, everything is possible but we need to reach a critical mass.”

According to Lawo there is no need for more sound channels, a larger bit-rate or a higher scanning rate anymore. “We need creative ideas to improve the overall experience,” concludes Lawo who is suggesting to Sportcast to analyse various ways of distribution and highlight certain acoustic experiences. “That could [be] a benefit for the entire production and distribution chain as well as for the broadcasters because they can attract much more consumers with a great sound mix for headphones.”