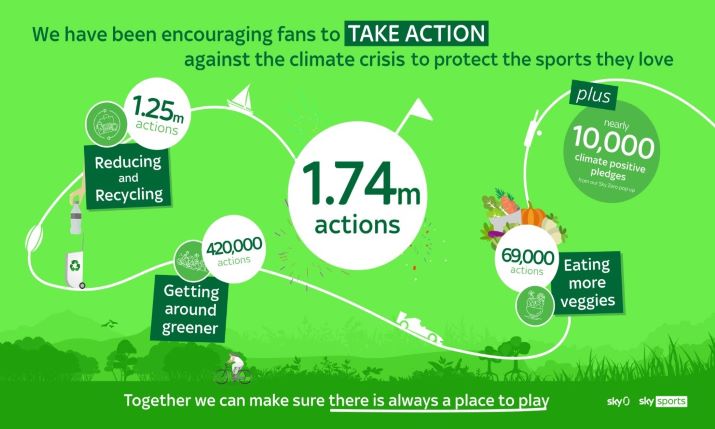 As part of Sky Sports’ efforts to combat climate change, sports fans attending some of the biggest sporting events over the summer took more than 1.7 million climate-positive actions.

As part of Sky’s ambition to be net zero carbon by 2030 the broadcaster has committed to work closely with key rights holders and governing bodies to help educate sports fans on the impact that climate change is already having on the world of sport, with rain delays, flooded pitches and events impacted by smoke from wildfires, as well as athletes suffering from heat exhaustion, all adversely affecting sports across the world.

Sports fans achieved a total of 1.74 million green actions. The majority of actions – 1.25 million – were through fans using reusable bottles and cups at the sporting events, as well as recycling their waste. At The Open, 65% of fans attending brought or bought their own reusable bottle, refilling at the free on-site water stations across The Old Course in St Andrews. At Magic Weekend in partnership with Sky Zero, 100% of fans at St James’ Park used biodegradable and fully compostable paper cups instead of single-use plastic cups, and at the Formula 1 British Grand Prix, it is estimated that bottles were refilled over 600,000 times at Silverstone.

Around 420,000 actions were recorded by fans who cut down on transport emissions by getting around greener to sports venues. Sustainable forms of transport included using public transport, park and ride shares, cycling and walking. Across The Hundred tournament, over 50% of fans travelled to the stadiums using a greener form of transport

Just over 69,000 actions were tallied up as fans also played their part by choosing to eat vegan or vegetarian alternatives instead of traditional meat-based matchday meals.

Sports fans successfully taking more than 1.5 million sustainable actions – 1.74 million in total – is a significant reminder of the global commitment made in the Paris Agreement and reaffirmed in The Glasgow Climate Pact last year, to limit global warming to 1.5°C to avert the worst effects of climate change.

Sky was advised by Rare experts in partnership with Count Us In to verify and calculate the total number of actions. As part of this they also helped evaluate the impact of fans’ climate action during these key sporting events this summer and helped to equip sports fans with a set of impactful actions they can take in their own lives to reduce their own carbon emissions while influencing solutions at a larger scale. The selected actions were chosen based on their emissions impact, accessibility and influence on wider systems change.

The results from this campaign come one year on from Sky’s Game Zero – the world’s first elite-level football game which achieved net zero carbon status in September 2021. On the day, both teams arrived at the stadium in coaches powered by green biodiesel, the Tottenham Hotspur stadium was powered by 100% renewable energy and 94% more vegetarian and plant-based meals were bought by fans.

Jonathan Licht, managing director, Sky Sports, said: “Climate change is something that is threatening sport and wider society, and we are extremely passionate about trying to encourage sports fans to act and make changes in their own lives. To have sports fans taking more than 1.7m tangible actions over the summer of elite sport is great to see and demonstrates what a difference we can continue to make when all corners of the sports industry come together to take purposeful action.”

The special one-hour documentary will premiere on Sunday 9 October at 19:30 and 21:00 on Sky Sports Premier League, and will be available on demand.

Sports fans can find out more information about this summer’s campaign and make a pledge by visiting skysports.com/skyzero.