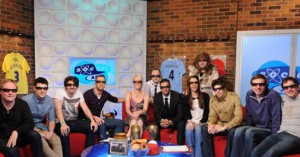 While there’s very much a case of ‘now follow that’ following the breathless end to the EPL two weekends ago, Sky Sports did its best in the run up to the Champion’s League Final this past Saturday with the first 3D production of its iconic football-based comedy/talk show, Soccer AM. The programme is also the first 3D production to be shot at the new Sky Studios. “We’ve bought Telegenic’s T21 OB truck in to do it,” explains Sky’s 3D Development Manager, Robin Broomfield. “We figured at this stage that it would be a little too much to run all this out of what is a 2D gallery, so that’s doing the vision side. Audio is coming out of the gallery as normal.”

The programme tends to be divided between studio and outside sets, and thus Sky’s planning encompassed a bit more than just plonking some 3D rigs on a couple of pedestals. Four ET Pulsar rigs were used inside the studio, with 3ality rigs providing the outside coverage, one on a pedestal one on a technocrane. The production also used two Sony HDR-CX300 handhelds, one cabled and one via RF, and three Toshiba mini-pairs, one of which is dedicated to filming the 3D-glasses wearing audience in the viewing theatre.

“It’s the first live 3D programme we’ve done out of Sky Studios and it’s involved a lot of Sky technical staff, which is a good thing as it helps broaden the 3D skills base and put what we have learned to the test,” says Broomfield. 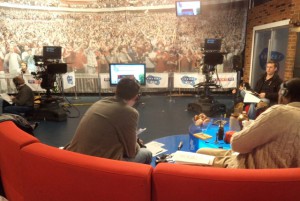 The first 3D production in the new Sky Studios was shot this past Saturday.

“The challenges we’ve got are mainly logistical,” he explained last week during final preparations. “All the issues of delay are compounded, for instance, and at the moment the audio guys are sitting down working out just how to manage all the delay with foldback speakers on the floor so they can give the presenters what they’re used to. This will also be the first time we’ve used things like studio prompt with 3D and we’ve had to do the tech installation of fitting those units.”

It was a busy day for the 3D team at Sky, with all the broadcaster’s 3D resources tied up one way or the other. While it’s only taking a feed from the Munich Champions League final match, over on the rugby side of things it finds itself the host broadcaster for the Heineken Cup Final from Twickenham. “The HC is a similar set-up to last year, but it’s all better,” says Broomfield simply. “The coverage will be better due to both the technology improvements, and also the fact that we’re developing our skills base, managing the depths better and so on, as we gain more experience.”

In fact, this is just the start of what Broomfield refers to as a true summer of 3D sport, with even some 3D cricket planned as the season develops. “We continue to develop cricket,” he says. “It’s not an easy one to do and it doesn’t lend itself so easily to 3D, but the angles we have developed look really good, and it’s a different way of covering it.”