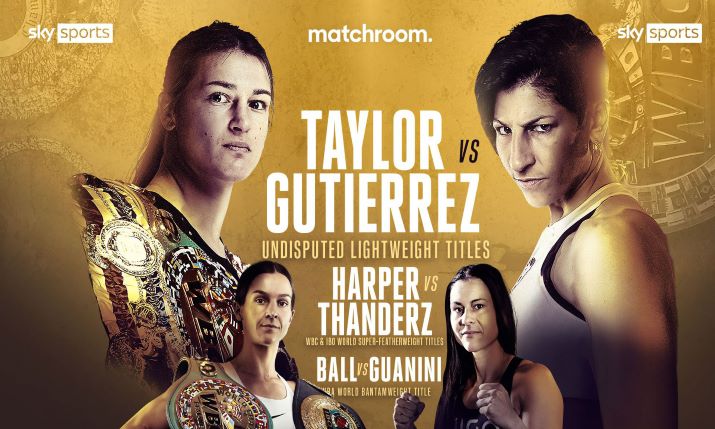 Sky Sports has announced it is making this Saturday’s Fight Night boxing available on YouTube, Facebook and skysports.com, as part of the broadcaster’s bid to make elite women’s sport more accessible to a broader fan base.

The triple-header of women’s world title fights taking place on 14 November – including undisputed lightweight champion Katie Taylor’s defence against Miriam Gutiérrez – are set to be available to all viewers via multiple digital platforms, both Sky Sports subscribers and non-subscribers.

As part of Sky Sports’ commitment to women’s sport, first announced back in March, the move comes with the aim of ensuring elite women’s sport is more easily accessible to the public through both increasing its existing coverage and by strengthening its digital output.

Taylor’s lightweight bout against Spaniard Gutiérrez – as well as Terri Harper’s WBC super-featherweight defence against Katharina Thanderz and Rachel Ball’s WBA bantamweight title fight with Jorgelina Guanini – will be available to Sky Sports customers on Sky Sports Arena and non-subscribers alike, from Saturday from 7pm on the broadcaster’s YouTube and Facebook channels as well as on www.skysports.com.

Adam Smith, Sky Sports head of boxing development, said: “We’re delighted to be able to make Saturday’s triple-header of women’s world title fights, a world first, available to a wider audience to showcase some of the brightest talents in the sport. We’ve been with Katie from the beginning of her professional journey and are proud to be a part of the boom we’re seeing in women’s boxing. Through live streaming the action, we are able to bring more boxing fans closer to the hard-hitting action than ever before with this world first.”

Eddie Hearn, managing director of Matchroom Sport, said: “This is more groundbreaking news that helps us push women’s boxing to where it needs to be. The momentum of the last few years led by Katie Taylor has been special to watch but we have still got a long way to go. Nights like Saturday change the narrative of the sport, and as I have said before, it’s not men’s boxing and it’s not women’s boxing, it’s just boxing.

“Katie Taylor is a trailblazer and it is only right that she headlines this card on Saturday on a moment that we have all been working towards for a very long time,” Hearn went on. “The key is to give these great fighters the platform to become stars and achieve their dreams. Without the support from Sky Sports this would not be possible and I’m so happy that so many people will be able to watch Saturday’s event.”