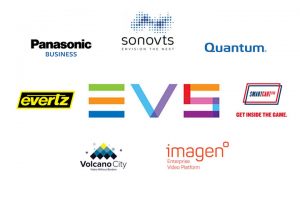 EVS, SonoVTS, Panasonic and Imagen are among the companies that are supporting next month’s Football Production Summit in Paris, which is heading for a sell-out.

Belgium-based EVS is the headline sponsor for the event at the Stade de France while Germany’s SonoVTS is sponsoring the registration process.

Panasonic and Imagen are both backing individual seminar sessions with the former also taking a tabletop place in the Stade de France’s Elyseum foyer.

The other companies taking tabletop sponsorship in the Elyseum are Cloudian, Evertz, SmartCart Technology, Quantum and Volcano City.

SVG Europe Executive Editor Fergal Ringrose said: “We are hugely grateful to our sponsors for backing the Football Production Summit. Without their continued support we couldn’t produce these events for the sport production and broadcast market.”

Discussing the conference itself, he added: “We have put together a stellar line-up of speakers for the Football Production Summit and registration is going very well. In fact, we’re heading for a sell-out. It promises to be an excellent event.”

FIFA, UEFA, Sky Sports, BT Sport, Perform Group, Premier League Productions and MediaPro will all be represented during a conference programme that takes in a range of subjects from preparation for the 2018 World Cup in Russia to the Video Assistant Referee (VAR).

The Football Production Summit takes place on 14 March 2018 at the Stade de France in Paris.