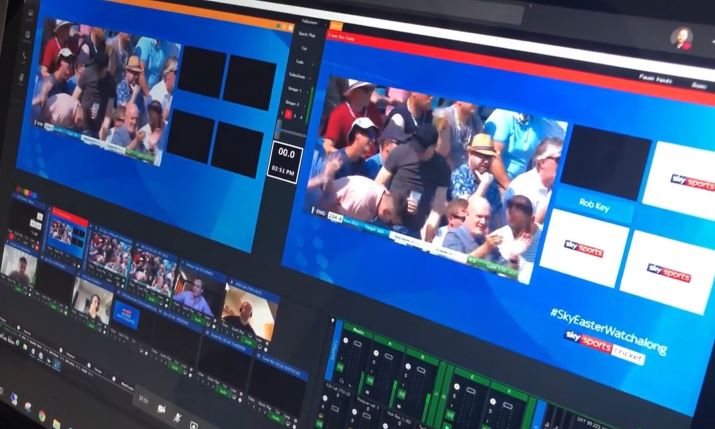 The Sky Virtual Production Suite has been used on dozens of productions to date, including The Football Show, The Boxing Show, Solheim Cup, Grand Prix, and more

Technology rarely makes a difference all on its own. It usually requires someone, or a range of people, to recognise the potential, adapt it and deploy it as a tool. This was especially true with the Sky Virtual Production Suite (Sky VPS), which represents a paradigm shift in the way that Sky Sports approaches some of its output, and has been awarded Outstanding Production Achievement – Innovation, at the SVG Europe Sports TV Awards.

According to Kevin McCue, director of group production platforms at Sky Sports, the broadcaster had been exploring the cloud for a while. “We started looking at how we could make our production work virtually,” he continues. “We were looking at how people could access this technology away from the site, what the protocols would look like and how we could practically make this work. It was a very limited set of tools.”

“Over the coming year more and more of the output that we create will have at least some elements that are cloud-based production. The next year is about us ensuring that we can create the most straightforward workflows for our teams to be able to get that content to our customers as quickly as possible”

The arrival of Storm Dennis in the UK meant these tools were soon to be utilised. “Most of the infrastructure in the UK had stopped because of the hurricane, and one of our editors, who has always done the Oscars for Sky, was stuck in Harrogate,” says McCue. “He’d been one of the editors we were working with, so he was able to [remotely] cut the Oscars live on the system. It worked perfectly. So we always call that the first module of the virtual production suite.

“The VPS offers capabilities that we can use to work away from Sky, but also has capabilities we can use inside a virtualised infrastructure,” he adds. “Rather than being tethered to Sky, tethered to workstations, or tethered to galleries, we can actually start to extract technology away from the user. We can have users anywhere we want to put them. That was part of our [original]idea, but for postproduction use, never initially for live production.”

Then COVID-19 arrived and everything changed. 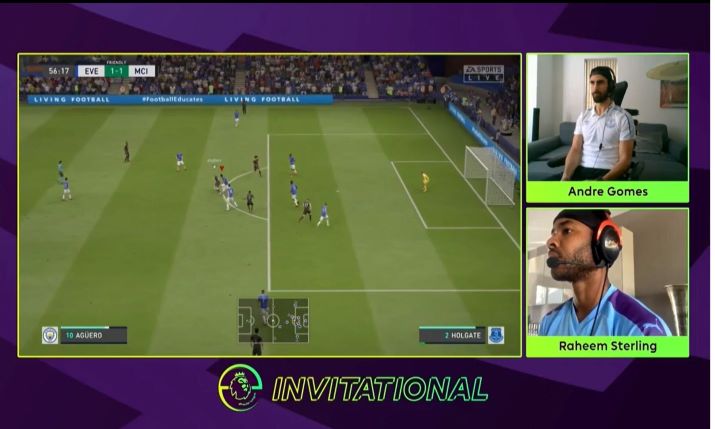 “After the Oscars, we knew we had a system to take on [cloud] workflows, we just didn’t have a production environment up there yet,” says ,” says James Clement, director of operations at Sky Sports. “We’d seen a lot of a lot of non-sport programming produced using video conferencing tools,” he adds. “We wanted to be able to do better.

Texts from industry colleagues John Currie and James Elliot pointed Clement towards vMix from StudioCoast. Within a couple of days he and McCue were cutting mini-shows on the platform on trial licences.

“Most of our [by now at-home] staff were on light laptops,” says Clement. “What we wanted to do was create output at a slightly less spec, so that out of one thousand people that work on the content that we create, we allow the maximum of those to be able to [still] do it.”

“We wanted to try and make it at least look like Sky Sports,” adds McCue. “We were very lucky to have a graphics specialist, Liam Titley, who came up with using Singular. He plugged in Sky Sports’s basic graphics into the system and it was believable almost straight away. It certainly wasn’t as flash, but on a still frame it looked like Sky Sports. The minute we showed that to our executives, they said, “go for it”.

“The live talent were at home all wanting to get involved,” he adds. “We wanted to put them inside this thing we’d built, and then put it out live on the linear platform.”

Sky VPS was rolled out for a ‘Cricket Watchalong’ event on 10 April 2020, followed by shows on Sky Sports News. The latter had become a ghost of its former self. “We lifted that into vMix, and all of a sudden that channel was alive again,” says McCue.

The system kept delivering. A booking system was created to meet the growing demand from across Sky Sports. “We’ve got 11 channels that we normally have on air, we have lots of different sports, they all have editorial teams who want to create content,” says Clement.

Eleven vMix systems were set up, with one hundred people rapidly trained up and equipped. “All the Sky Sports News output was being done remotely and most of our post production output was done remotely,” says McCue. “We were re-imagining the way that we operated. We took the approach that a director should direct a show, so let’s give them something they can use at home to direct.”

McCue and Clement next worked together on Sky’s major move into remote production to support the return of live football in June 2020, but carried on pushing a cloud agenda. “We knew that it was the future,” says McCue. “James and I recognised that we’d flipped our organisation. They were happy with the new ways of working and we wanted to keep challenging what we were doing.”

It was decided to cover netball as a live multi-camera cloud-based production, using the public internet for distribution.

“It was a bit of a step for us, to go from talking heads and archive footage to [working with] our live rights,” says Clement. “We needed to pick a strand of work that we knew that we could have a controlled risk around, that was fully under our control and had a smaller scale spec than the standard.

“The netball editorial team and everyone around it really wanted to get on board,” he adds. “They could also see the sustainability side of this. The carbon reduction by us running in a virtual suite for two hours versus having a mainstream gallery on-air is significant, plus the reduction on travel because we were using a virtual gallery.”

“We wanted to do it in a way where it was meaningful,” says McCue. “vMix clearly is a great platform but it’s not supportive for live match coverage; it didn’t have replay and all those additions that we needed.” 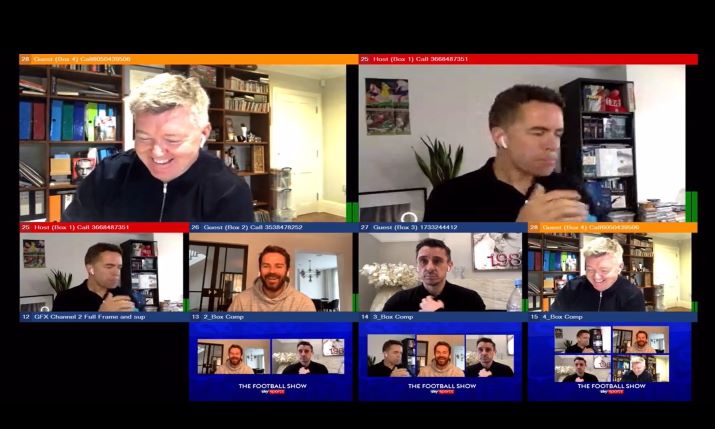 The Football Show gets the Sky VPS treatment in lockdown

So they turned to the ViBox system from SimplyLive. “Luc [Doneux, SimplyLive MD] worked really hard,” says McCue. “He put a lot of his people on it, and he put a lot of focus and work into it. He said, “I see where you’re trying to go with this. I want to be behind you”.

“SimplyLive is provisioned in the cloud, presented over the PC-over-IP (PCoIP) protocol from Teradici,” McCue continues. “We have touchscreen interfaces, we’ve got the RCU [SloMo replay], we’ve got software faders for the mixer and so on.

“For the netball, we were doing internet contribution through LiveU straight to the cloud with hybrid 5G/internet connectivity,” he adds. “We used two LU800s – 4K bonded devices that we were using as four channels of video. We were sending tally from the cloud back to the cameras over the public internet. We were doing the graphics remotely. We were returning it back to Sky and passing it on to YouTube and Wildmoka and various other platforms to distribute it.”

The AMPP platform from Grass Valley was deployed on contribution and distribution duties.

“We wanted a full suite for our teams,” says Clement. “At any point, if we go back into any kind of lockdown, we’ve made cloud platforms available. We’ve got everything available, fully live on-site, at home and everything in between. There’s the possibility of doing anything from anywhere. We can give our teams a sustainable way of working that isn’t on the edge, that is fully supported, that isn’t a workaround.”

McCue agrees: “The Sky CT&I team that built the cloud production platform put a lot of work into making that thing perfect. They should be celebrated.”

Sky VPS has been used on dozens of productions to date, including The Football Show, The Boxing Show, Solheim Cup, Grand Prix, and more.

“Over the coming year more and more of the output that we create will have at least some elements that are cloud-based production,” says Clement. “The next year is about us ensuring that we can create the most straightforward workflows for our teams to be able to get that content to our customers as quickly as possible.

“What I think we’ll be doing is to see how we can then maintain that content in the cloud and then get it to our customers in different ways, such as adding more interactivity, adding metadata,” he adds. “We are a premium rights holder at the end of the day, we’re not going to flip our entire portfolio suddenly up to the cloud because we don’t need to. We have our existing facilities and we still have to deliver every day; we have a lot of content to eventually transition. I think we’ll spend a bit of time improving some older workflows, especially around some of our older interactivity.”

Says McCue: “We’ll be looking at everything that we’ve learned here and applying that across our European business as well. We’ve done all of the work, we’ve done all the R&D, we know it works in operation. There’s a lot of tier two or tier three rights available that we could start to apply this into, to bring up the content quality.”

As well as preparing Sky to be resilient in the face of further lockdowns, McCue says the cloud approach also prompts discussion about accessibility. “If we build facilities where people can use these things from home, then our access to talent, whether able or disabled is massive,” he says. “We can remove these traditional barriers, get more people involved in what we do.”

The duo is keen to stress that developing the operational process, and constantly iterating it, is just as important as the technical side of the project. If not more so.

“If operationally, you can’t identify with what you’re doing, the technology should just be switched off. It’s never going to work,” says McCue. “You’re never going to get a car to drive properly if when you steer left, it goes right. That’s what can sometimes happen when you look at things from a pure technology perspective; what seems to make sense just doesn’t translate.”

The SVG Europe judges seem to agree, describing the collaborative effort behind Sky VPS as: “…an important signal that the times have changed. They haven’t just created innovative workflows to make sports production under COVID-19 restrictions work, they have committed to, and built, a system that will change the game and continue to develop in the future.”