Following the Carbon Literacy workshop held on the morning of SportTech 2019 at Lord’s on 22 May, SVG Europe launched the ‘One Planet’ (Sustainability in Sports Production) initiative, inspiring change and outlining pledges made by producers, broadcasters, rights holders and suppliers to improve the carbon footprint of sports television and outside broadcast.

At the conclusion of the SportTech proceedings, SVG Europe editor Will Strauss sat down with Russell Seymour, Lord’s Cricket Ground sustainability manager and founder of BASIS (the British Association for Sustainable Sport), to look back on how the day went and forward to challenges ahead for the sports broadcast production business in becoming more sustainable in future.

By way of introduction, Strauss asked rhetorically what impact the sports television business is already having on the environment. Research by BAFTA has shown that “production of an average hour of television in the UK generates about 14 tons of co2. That’s just production: it doesn’t include transmission or distribution. It’s an average across all genres, not specifically sports. But to put that into some context, a typical UK home emits 4.5 tons of co2 a year in gas and electricity. So in effect, producing one hour of TV is the same impact as running three houses in the UK for a year.

“Sports is by no means the worst culprit – but we can certainly do better. Our use of power is one, and then there’s travel – particularly when it comes to outside broadcast. As such, there are two key areas we think the industry can act on: identifying best practice and ensuring it is embedded across all aspects of sports production and outside broadcasting; and working in partnership to tackle the more systematic problems that may take longer to resolve including moving away from diesel generators or using low carbon transport,” said Strauss. 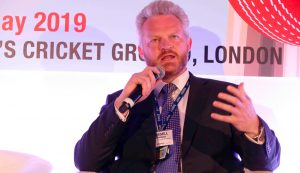 “I’ve been in my role for about ten years now,” said Seymour, “trying to reduce the energy impact at Lord’s through recycling and energy use. The sports broadcast industry has a couple of opportunities. First in movement: is there an opportunity to rationalise the number of movements that are being made, for example in covering something like the Cricket World Cup? Can you use lower-carbon forms of transport? Are there opportunities to change the way you broadcast?

“I think the other huge opportunity,” he continued, “perhaps on the more creative or editorial side: you do need to fill space sometimes in your broadcast, so why not make a story about climate change or environmental impact? There is so much public interest in this. Nobody is suggesting sports becomes some kind of campaigning body around green issues: but we are trusted ambassadors, if you like. There is an opportunity to tell these stories and take a responsible position to say ‘we’re going to be impacted by these things, and we actually want to talk about them as well.’ ”

A dramatic reduction in carbon footprint

As an example of practical achievements by sporting venues like Lord’s, Seymour said that the facility now runs on 100% wind-generated energy, “so from our baseline year of 2010 we have dropped our carbon footprint by 82%, just by making that switch. There are a few other things involved there, but a key part is actually having the commitment to getting on and doing it. It is relatively simple, and something you could potentially do – maybe not tomorrow, but certainly when your next energy contract comes up.

“Energy is huge: we now use 35% less gas and less water than we did ten years ago, and 7% less electricity. These are just efficiencies,” he said.

“Between 2017 and 2018, we knocked out 1.5 million individual pieces of plastic that we had been handing out to our spectators, mostly through catering operations”

“In 2017 plastics really came into the news, with Sky Ocean Rescue and the Blue Planet effect. We took a hard look at what we were doing and between 2017 and 2018, we knocked out 1.5 million individual pieces of plastic that we had been handing out to our spectators, mostly through catering operations. And in the last off-season we’ve knocked out another 400,000 pieces. Those are the sorts of impacts you can have, just by looking at your operations.”

Concluding the session, Strauss asked Seymour what sports TV production people in the room could practically do to help reduce the environmental impact of their organisations and start to make a difference in relation to climate change.

“On an individual level, if you’re passionate about it, start researching. The workshop we did this morning was fantastic. We were taken on a roller-coaster ride of climate change. We were warned that by the middle of the session we would feel pretty bad, with everything looking bleak as if the world were going to fall apart tomorrow.

“But it was all backed up, and it was explained that there are things people can do. There are approaches we can take.

“A huge amount of responsibility sits with government, clearly, and the big producers of greenhouse gasses. But it is about awareness, and about individuals questioning things. Follow the news.

“There is a lot of science behind this now, and there is an opportunity for us to do something. It does need drastic action, not just from individuals but with the support of top management as well,” said Seymour.