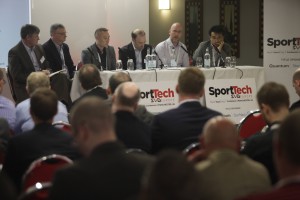 Live sport producers, facilities and broadcasters will be given the chance to take a phased or hybrid approach to the transition from baseband to IP, according to representatives of six of the broadcast industry’s most influential equipment manufacturers. Speaking during the ‘Live Production over IP: Charting the Transition from Baseband’ session at SVG Europe’s SportTech conference, senior sales and marketing executives from Sony, Grass Valley, Quantel-Snell, EVS, Imagine Communications and Ross Video were united in their plans to develop IP-based products for every part of the television workflow, especially for 4k.

But while all six were optimistic that IP would eventually be the foundation upon which all live TV is made, each admitted there were still hurdles to overcome before SDI and baseband video is completely replaced by standard Ethernet connectivity. As such they all agreed that IP should be introduced in a phased or hybrid way that will allow users to benefit from off-the-shelf connectivity but without the need to instantly discard expensive legacy video equipment.

Steve Dupaix, Senior Director, Strategic Partner Marketing at Imagine Communications summed up the manufacturing fraternity’s approach. “Imagine is focused on the transition to IP for the whole broadcast workflow,” he said. “We are committed to the production space and to producing infrastructure products that will support it and help [end-users] to transition to it.”

Other speakers followed suit, with the speed of the transition getting particular attention. “As IP evolves it is important that is stays at the right pace,” said Andy Newham, Ross Video EMEA Business Development Manager for Switchers and openTruck, while Trevor Francis, Director of Broadcast at Quantel-Snell, asserted: “It doesn’t need to be a big bang. Our strategy is to allow people to migrate to IP at a pace that they choose, putting IP alongside existing infrastructure.”

The ‘hybrid’ model was a constant theme throughout the conversation. Laurent Petit, EVS, Market Solution Manager, OB and Live Production, was keen to point out that his company’s IP products are designed to aid a phased transition. “The reason that we have invested time in developing a new IP gateway solution is because we know that there is a huge install base of video servers in the market that will not be changed in a day just because the world is going to IP,” he said. “The idea was to introduce a product that could leverage the existing infrastructure and go step-by-step into the IP domain, allowing users to gain experience with the different IP challenges – in terms of interoperability and synchronisation — and then be ready for the next generation where everything can be integrated together.” 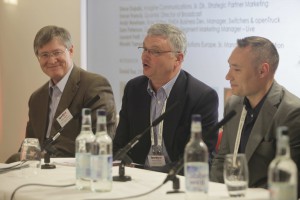 Grass Valley also produces intermediary technology but, as Sam Peterson, Senior Segment Marketing Manager – Live, pointed out, there are opportunities for naked IP connectivity. He explained: “We have gateway modules too but because we have servers and cameras and switchers, we have taken the next step and that is to do tests with direct connectivity between devices. The one application for us that we do think has some immediate merit is in Ultra Motion cameras.” Peterson suggested that with a Grass Valley LDX86 high-speed camera it is possible to take an IP signal out of the base station on one wire instead of on two or three and then inject that Ultra Motion live into a slo-mo replay server.

“That is one place where we can aggregate those multiple links together,” he said. “We’ll see how that pans out. We’re ready to test this in professional applications. That is the only way that we will find out how this works out. We have a couple of truck user partners that are looking to develop it.”

Coming into its own

While IP offers a myriad of opportunities, it was agreed that it only really comes into its own when you start to look at the move to high frame rates (HFR), high dynamic range (HDR) and higher resolution content such as 4k. “To be honest, if you are using HD, you cannot see a benefit with IP because SDI is a mature technology and is a very reasonable price,” said Hiroshi Yamauchi, Sony Professional Solutions Europe, Senior Manager 4K IP Production.

“It is more appropriate for a hybrid HD and 4K use, that might include HDR or HFR where you want real-time and low latency. Our message at Sony is that IP is for when you are thinking about future investment.”

“Mostly Ethernet works at 3Gb or 10Gb and there are quite a lot of limitations there,” he said. “So we need to look at some form of compression within the IP and we don’t have a standard for that yet. We are doing some work with TICO to try to identify some sort of low level compression at about 4:1 that can work realistically so you can transport 4k over 3Gb. On a 10Gb [connection] you can do it over three streams.”

Dupaix added: “Using these lightweight compression techniques, the compression lives in the 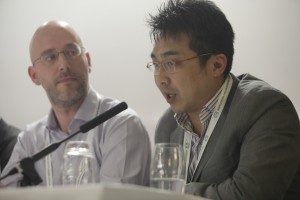 active video area so if you look at the signal on a monitor you will just see noise but all the timing is preserved for a 1080p signal. That means that you can do clean, quiet switching through a traditional SDI infrastructure with TICO compression and still do audio dunking or I/O channel swapping. That is significant because it makes it possible to do 4k production through both an IP-based fabric or an SDI based fabric with very low latency.”

Peterson from Grass Valley said TICO was on his company’s agenda too with Ultra Motion. “When it comes to 4k for this,” he said, “We’re looking at TICO. That is a reasonable first step and it is the best solution we have today.”

Prompted by a question from the audience about the possibility of building a remote/centralised facility “back at base” and deploying cameras on location, bringing the pictures back as IP, the panel offered a mixed response.

“One element that needs to be answered is what type of connectivity do you have?” asked EVS’ Petit. “It will largely depend on that. You need to have a 10Gb pipe in order to transport a few signals. If you want to do a 20 or more camera production and still have small bandwidth to carry the signals, we are talking about a different types of compression that would not fit into this IP domain.”

The issue of latency was then addressed. With Imagine’s Dupaix wondering how much of a delay a broadcaster could tolerate. “The number one handicap to doing a live production remotely is the timeliness of the video you are watching,” he said. “If you are expecting to have only a two frame, 40 millisecond, delay that is not going to happen. For secondary channels and other things — such as graphics production — that can tolerate a delay, then it is possible. But with live production, trying to capture the action in real-time and respond to it, that is the real bug. It needs to stay local to the truck.”

Newham from Ross was more black and white with his answer. “We can kind of do [remote production] now with a given latency if we’re talking about HD. For 4k, it gets a bit more complicated.”

One for the future

Future proofing was another strong argument for IP with Peterson highlighting that the drive to better picture quality is not going to stop at 4k 50 frames per second, which means that the advent of 12G-SDI is unlikely to be sufficient.

He said: “IP gives us a little bit more flexibility for the next thing whether it is 4k 100 fps or 4k 100 fps UHD. Plus what are we going to do in colour space and High Dynamic Range? 12G-SDI is just another stop on the continued chain of developing higher resolution video systems.”

“12G-SDI, we are supporting it,” added Francis. “But it is going to be a temporary distraction. Not a destination. The fact that IP technology isn’t aware that it is carrying video, therefore does not know or care about frame rates and codecs, you cannot bring it quick enough.”

When it comes to HFR and HDR, Dupaix concluded: “The quicker we get to the IP domain, the quicker those types of technologies will come to the fore and we can start to revolutionise our industry.”