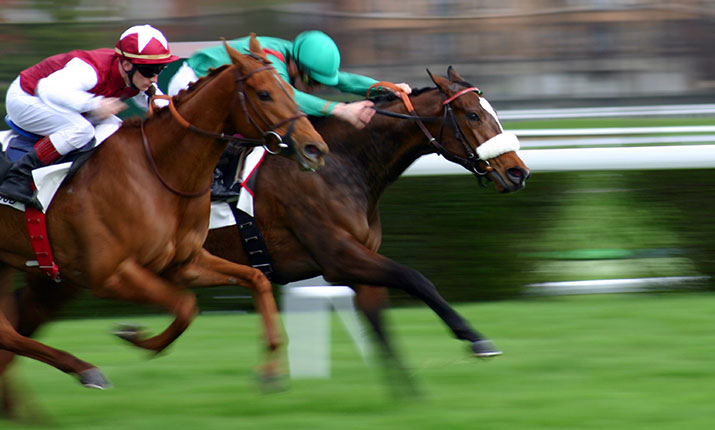 Although ITV Sport has already won a BAFTA for its horse racing, the broadcaster’s technical and production teams are certainly not resting on their laurels, as recent work for the Cheltenham Festival illustrates.

For coverage of the biggest four days of the jump season, ITV Sport and its broadcast production partner NEP added an additional ultra high motion finish line camera and what has been dubbed the ‘Claisse Cam’, named after the clerk of the Cheltenham course, Simon Claisse.

The new additions supplemented the already established elements of the 49 camera OB which includes a 285-metre wirecam, a live RF helmet-mounted “Jockeycam”, a car-mounted tracker cam and starter jib and a Batcam UAV.

“With the equipment’s close proximity to the riders and horses, safety had to be a priority.”

The two new positions add new editorial opportunities but the real story isn’t the technology, explained Rob Oldham, technical producer, broadcast for ITV, but the “relationship that ITV and NEP have with the courses”.

This close working partnership allows them to “collaborate” and “get approval for new camera rigs which are considered safe for use in the racecourse environment.” 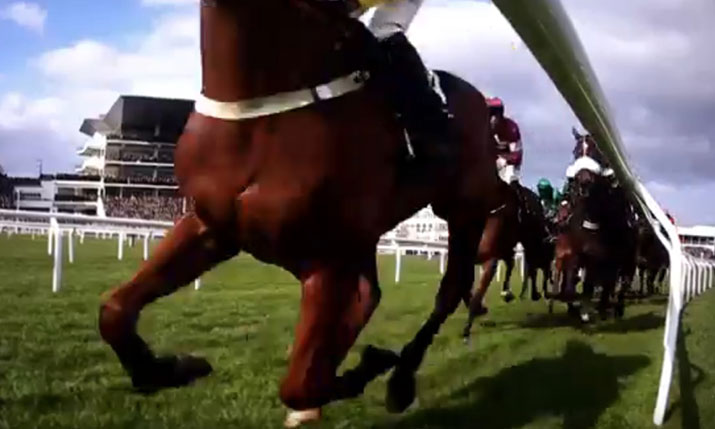 The ‘Claisse Cam’ consists of a pair of small cross-shooting minicams that are mounted close to the running rail of the track.

It offers an effect shot which is cut in as part of the live race coverage, giving a different perspective and showing the scale of the horses passing (pictured, right).

For Jon Harris, NEP technical projects manager, there was more to consider than how good the shot might be.

“With the equipment’s close proximity to the riders and horses, safety had to be a priority,” he told SVG Europe.

“We worked with the racing officials to ensure that an appropriate mount and fixing system was used which falls in line with the safety regulations of racing and doesn’t compromise the integrity of the running rails of the track.”

Another important element of the ‘Claisse Cam’ shot is the requirement to capture the nearfield sound and ensure that it sits prominently in the effects mix of the programme.

“The intention is to develop the product further to a wireless solution and to build the cameras within the racecourse running rail system to get even nearer to the action.”

To make this possible, NEP created a custom video and audio over fibre system that powers the cameras and enables audio effects mics to be positioned near to the rail as well.

“The system is compact and fully integrated to avoid a mass of cables and bits of equipment which would otherwise be an issue due to where it’s positioned,” added Harris.

“The intention is to develop the product further to a wireless solution and to build the cameras within the racecourse running rail system to get even nearer to the action.” 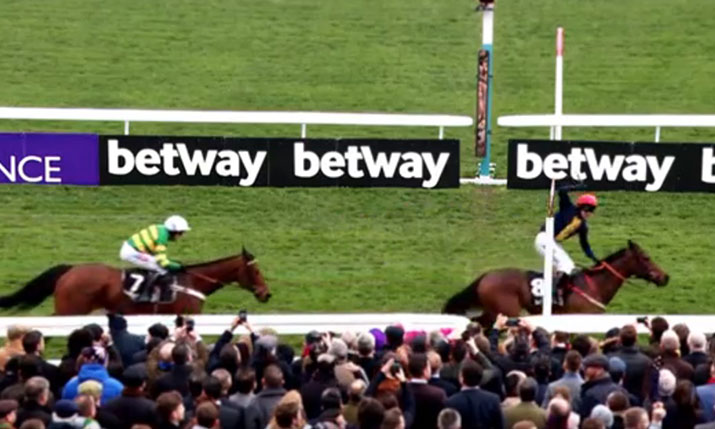 The second of the new cameras, the ultra-high motion finish line camera (pictured, left), provides a 6x zoom shot from a mounted position that is directly in line with the finish line.

It’s certainly not the only camera positioned there, however.

There are a number of cameras focussed on the finish line, generally mounted high up on the Grandstand to help distinguish any close finishes.

“The integrity photo finish is produced from this angle as well,” continued Harris, “so we decided that for our creep shot we would mount this lower on the Grandstand looking along the finish line.

“On playback, we can show frame-by-frame the approach to the finish line and allow the commentators to discuss the placings of the horses.”

The finish line camera will also be used during coverage of the Aintree Festival, including the Grand National (6 April 2019).

“The real potential for it, however,” added Harris, “will be as we get into the flat season of horse racing where it becomes all about speed and we’re likely to then see more close finishes.”

In addition to the finish line camera and the ‘Claisse Cam’, ITV Sport also introduced a gimbal mounted Pico operating as a Polecam for Cheltenham. This was used to roam the temporary hospitality village, capturing shots of racegoers.

ITV Sport won the BAFTA Television Award in the Sport category in 2018 for its coverage of the 2017 Grand National.

Coverage of the Cheltenham Festival and the Aintree Festival are ITV Sport productions for ITV.

Watch all the specialist cameras in action