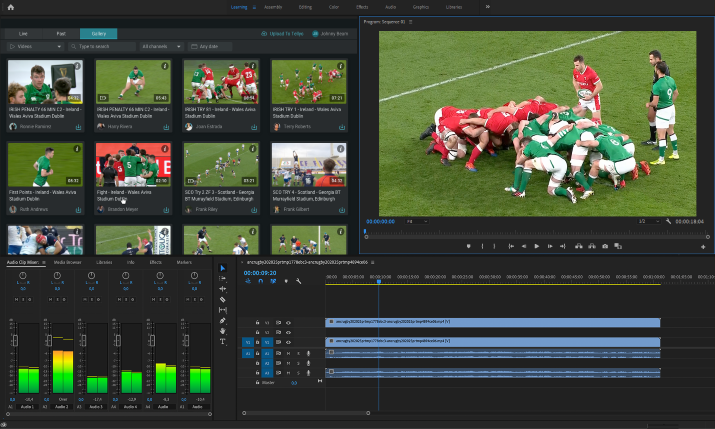 Production company Sunset+Vine was appointed to be the live production partner of a new international rugby competition, the Autumn Nations Cup 2020, which has seen teams from England, Wales, Scotland, Ireland, France, Italy, Fiji, and Georgia set against each other.

The demands of the tournament, which runs from 13 November to 6 December, were such that Sunset+Vine needed a production solution that would allow it to rapidly clip, edit and publish from the live stream and distribute them in real-time to its broadcast partner.

Particular to this project was the need for a high level of quality in the output, advanced editing systems, a low latency ingest and the ability to manipulate ingested audio tracks.

Sunset+Vine teamed with Tellyo to help across all 14 of the Autumn Nations Cup matches that are included in its digital mandate.

The companies have worked on many projects prior to this, and given Tellyo’s recently released higher bit-rate support and partnership with Adobe, it was well matched to the brief. Also matching Sunset+Vine’s objectives, Tellyo’s existing capability allowed the ingestion of SRT streams and a choice of all audio tracks, as well as the capability to run the Tellyo platform with a synchronous redundancy stream.

The partnership between Tellyo and Adobe allowed content created in Tellyo to be immediately available in Premiere Pro. It also enables craft edits created within Adobe Premiere Pro to be uploaded to Tellyo for publishing or use in other montages. Alternatively, content can be published to digital destinations from within Premiere Pro. This is made possible through the Tellyo Premiere Pro extension available in Adobe Exchange.

Richard Collins, CEO at Tellyo, said: “We’re delighted to continue our long partnership with Sunset+Vine. This is a fantastic project to be part of, and timely, as the needs of the project were almost tailor made for the new functionality within Tellyo Pro, but also gave a robust test to our newly released Adobe Premiere Pro integration.

“The result was highly satisfying, with the whole workflow running smoothly at 1080p, 20 Mbps and 60fps from an SRT ingest, enabling the latency and audio efficiencies that Tellyo empower from that.’’