Sunset+Vine, the global TV sports producer and distributor, has been appointed as the host broadcaster for the next three years of the Hero Caribbean Premier League, until 2020. The 2018 edition of the series takes place 8 August to 16 September. 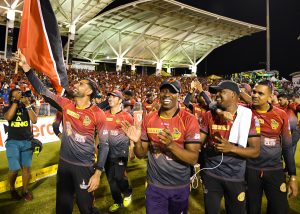 The Hero Caribbean Premier League (CPL), which first started In 2013, is a franchise-based T20 format cricket tournament that combines two of the most compelling aspects of Caribbean life – dramatic cricket and a vibrant Carnival atmosphere. Combining broadcast and digital viewership, over 197 million fans watched the 2017 season to make it one of the fastest growing leagues in world cricket.

Under the terms of the deal Sunset+Vine will be producing the World Feed for the six-team franchised competition – a total of 34 matches taking place across seven countries – as well as creating all pre and post-match programming. There will be a total of 85 crew working on the HERO CPL which will be split across two teams. Three outside broadcast units will rotate across the eight venues. Huw Bevan will be executive producer.

Huw Bevan, executive director at Sunset+Vine, commented: “We are delighted to have reached a long-term agreement with the Hero CPL. It is a very special tournament. There’s nothing else quite like it. It combines the very best of Caribbean culture with world-class cricket to create the biggest party in Sport. For 2018, aside from the action, we are committed to showcasing the true essence of this unique sporting occasion and the beauty of the Caribbean. There will also be an emphasis on behind-the-scenes access to players that will enable us to capture the fun, relaxed nature of the tournament and take this to a growing global audience.”

Pete Russell, COO of Hero CPL, said: “Sunset + Vine have shown over the years that they are at the cutting edge of cricket broadcasting and we are delighted to have them sign a long-term deal to provide world-class coverage of Hero CPL. We saw last year the innovative and interesting way they go about bringing the tournament to life and they are the perfect partner for Hero CPL going forward. We are sure that this year’s tournament will have even more impressive coverage than we saw in 2017.”