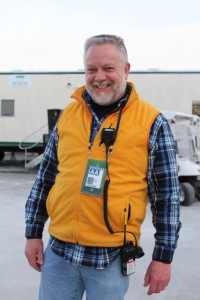 Although the NFL is America’s most popular sports property, its fans extend well beyond the borders of the US. As a result, the Super Bowl has become one of the largest international sports events on the annual calendar, with a growing number of countries taking the NFL-produced world feed each year. This year, the NFL is responsible for delivering that world feed to more than 150 countries — encapsulating more than 700 million viewers in 2013 — including nearly 20 on-site clients at the MetLife Stadium truck compound.

“We have a few more clients this year, and we certainly have more of the large mobile units this year,” says Jeff Howard, senior executive, engineering and broadcast technology, NFL Films. “It was also very interesting planning for the weather and making sure everyone’s concerns were taken care of.”

The NFL world-feed team has the pleasure this year of operating out of one of the most advanced mobile units on the road today, NEP’s EN-1, which rolled out in September and serves ESPN’s Monday Night Football production during the regular season. Three of its four units — A, B, and D — are on hand at MetLife.

In addition, the NFL has rolled out NEP’s Super Bee unit to convert all feeds to 1080i for distribution (Fox operates in 720p) to the various rightsholders. The world feed is branded as an NFL Network telecast, but a clean feed of the telecast is provided to a selected number of broadcasters who request it.

Overall, NFL brings in 40 clean feeds from the Fox Sports production: about 30 camera isos and 10 miscellaneous switched feeds. On top of that, Howard and his team have deployed three unilateral cameras to be used during Fox’s on-air talent cut-ins and branded promotions.

Howard and his team are currently transitioning away from copper cable as much as possible and relying almost entirely on fiber — a trend that can be seen across nearly all broadcasters at the sprawling Super Bowl compound. However, while the winds of change are speeding up in favor of glass-based connectivity, the changeover is far from seamless.

“We are transitioning slowly but surely away from any type of copper audio distribution, trying to get rid of DT12s any way we can,” says Howard. “It is coming along well, but you always have pushback from broadcasters because, if power goes out, you won’t have any problem with a piece of copper wire. That said, we do have all the broadcasters inside the stadium running on fiber. We still have some DT12 running in the compound for short runs, but that’s about it.”