Supercup 2022: The DFL ups the big game with a glass-to-glass strategy 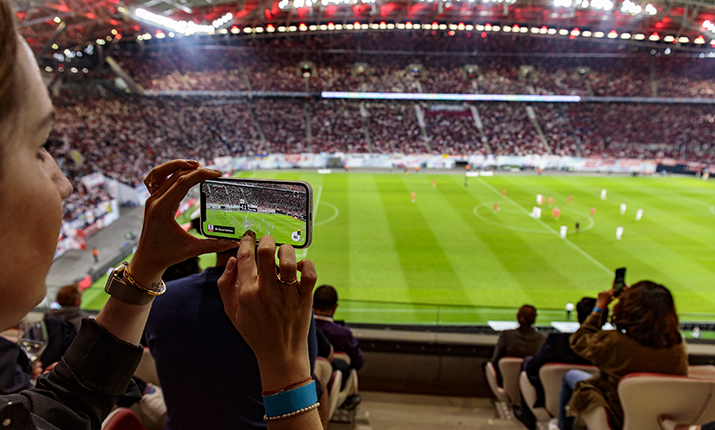 How many passes has Marcel Sabitzer made? A fan takes advantage of the pilot 5G Stadium App

With the media focus on the Supercup 2022 clash at the Red Bull Arena, the Deutsche Fußball Liga (DFL) took the opportunity to highlight its ‘glass to glass’ strategy where it combines the use of camera and drone footage, data capture, and AI sports analysis with TV production and 5G phone apps to really enhance the Bundesliga fan experience.

Responsible for the live production of all matches that take place during a season in the Bundesliga, Bundesliga 2, the relegation play-offs and the Supercup, Sportcast was founded in 2005 as a wholly owned subsidiary of the DFL.

“We are the production company of the Bundesliga itself,” says Alexander Günther, managing director of Sportcast. “Over the last 15 years, we’ve established production through the entire value chain. Through our fibre network, we provide connectivity to all 36 stadiums in the Bundesliga 1 and Bundesliga 2; every single signal is distributed to a central hub located in Cologne, where we enhance the programme with our national partners, such as Sky and DAZN, with audio, data, graphics and so on.”

Günther and his Sportcast colleagues were taking SVG and others on a tour of the Red Bull Arena, home to RB Leipzig and currently getting ready for the big match that would take place later against the mighty FC Bayern Munich.

“We also operate the world’s biggest football archive, the DFL Media Hub,” continues Günther. This was established in 2007, collecting all material that was produced from 1963 until today. We have almost 200,000 hours of football with 11PB of storage [on AWS], and we can provide everyone with Bundesliga content, either live or non-live for any kind of platform distribution.

“In addition to that, we are responsible for the final distribution of all the signals for almost 50 media partners through streams, satellite and fibre connectivity,” he adds. “So, we’re not only the broadcast producer but we are also the co-ordinating company.”

“There are a lot of different national and international broadcast licence-holders here [at Supercup 2020] today, so we must see to their interests. Who do they want to talk to?” says Tim Achberger, Sportcast’s head of innovation & technology management. “Every player, every team has some representatives, so [how can we facilitate] the interviews? All this coordination, the accreditation, who’s allowed to arrive, where do they go, and so on, that’s all part of our operations as well.

“It’s very important for us to have a similar product for our world feed in all Bundesliga stadia,” he adds.

In the Mixed Zone, Achberger pointed out two fixed cameras that would capture the atmosphere of the media build-up and player interviews during and after the match.

“These two cameras are installed by Sportcast to give even more perspectives of the atmosphere and the gathering before the match,” says Achberger. “That’s an example where we have to work closely together with the clubs to see where we can install infrastructure, such as these cameras, and how we can create the best production together.” 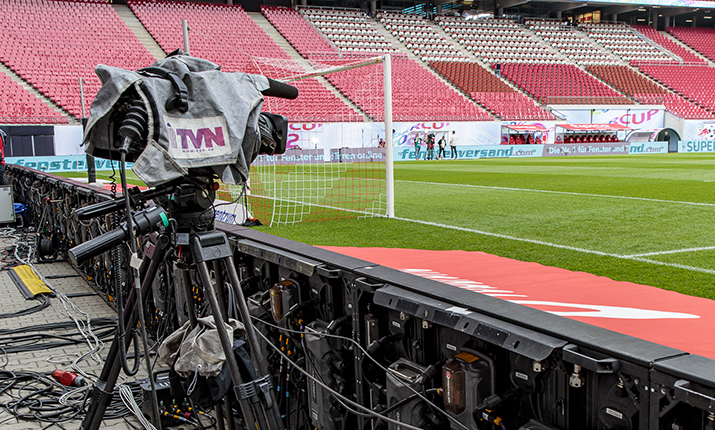 The Sportcast TOPSPIEL+ (roughly translated as ‘the big game’) production concept delivers 176 matches per season in 4K, deploying up to 26 cameras at more than 60 top matches (an increase on the 21 cameras that were previously used).

Games this coming season will regularly use aerial camera systems, pole cams, Steadicams and Corner Cams. The latter was patented by Sportcast, which saw the opportunity to embed a smaller camera within a flexible housing that could bend with the impact of balls and players.

The cameras aren’t 4K, as they’re not used to display the game for long durations, but when there’s a tackle at the corner post, or a corner, the Corner Cam is regularly deployed, and often delivers “spectacular pictures”, according to the production team.

“We usually have two on our main production, that’s normally enough,” says Achberger, guiding us around the pristine grass of the pitch. “We have camera perspectives from all over the stadium to give the best setup possible, including the aerial camera system deployed above the pitch and a super slow-motion camera.”

For special matches like this Sportcast deploys Coach Cams that allow the production to cut to the reaction of the coaches, an 8K Cinecam for more in-depth ‘beauty shots’, as well as a behind the scenes view from a Mini Drone. Sportcast was among the first companies to deploy huge drones that deliver beauty shots from high up above the stadium, but since last year it has been experimenting with a small drone that it can deploy on the pitch and let tour the locker rooms – not when players or staff or personnel are in there. It cuts the recorded pictures into the live signal to offer fans a new previously unseen perspective. 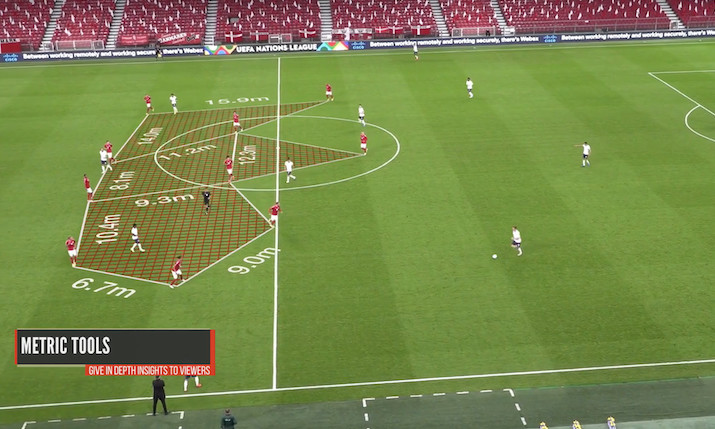 On the pitch tour, Achberger points out a camera directly under the LED screen. “This will provide the main feed for the new Tactical Feed,” he says.

The Tactical Feed (pictured, above) was in use at the Supercup for ESPN, Sky, NextMedia, Viaplay and ten other international broadcasters. Live tracking, heatmaps and other data are at the heart of this service, developed in conjunction with AWS by the DFL’s Sportec Solutions subsidiary (itself a partnership between Sportcast and Deltatre). Analytics and machine learning are deployed to glean insights and generate predictions, powered by AWS.

Through this, the DFL is able to deliver the Bundesliga Match Facts service, created by gathering and analysing data from live game camera feeds. Now it has combined this with a new interactive service, the Tactical Feed.

“This came from a service that we have been developing for the past six or seven years for the sports analysis area,” explains Steffen Merkel, member of the DFL management board and EVP of Audiovisual Rights for DFL. “The scouts and tactical analysts on teams asked to get a feed where they see all 20 players on the pitch [not goalkeepers] and Sportec Solutions delivered them a signal. It was relatively low quality, but then Sky Deutschland suggested that we could create a broadcast-ready product and enrich this with additional data from the Match Facts graphics.”

Since the 21-22 season, Sky Deutschland has offered the Tactical Feed, enriched with graphics and statistics, on a separate channel, but it’s now also available for international broadcasters with dual commentary.

The live tracking data has also enabled the delivery of the new Star Cam service which can automatically follow single players.

Yet another innovation is the Interactive Feed ‘first-screen’ experience. “The idea we had, three or four years ago, was to create the perfect product for Generation Z and for OTT broadcasters, an interactive product where you can switch between parallel games on a Saturday afternoon conference for example,” says Merkel. “We are the only league which has several parallel games on a Saturday afternoon and where such a switch is possible.

“It contains an event timeline,” he continues. “If you are late for a game or if you’re switching to another game and want a catch-up with the highlights, you can flexibly click on an event timeline and see the most important parts of the game. Everything in the product is clickable – you can see statistics around the game, around the players, you can see all the Match Facts live.”

The service was in use at the Supercup, deployed by Bundesliga’s broadcast partner in Japan, SKY PerfecTV!, as well as Network4 . “We are already in very good discussions with several other broadcast partners,” says Merkel. “We will deploy the product for the 22- 23 season, as it delivers the full interactive experience for an OTT broadcaster.”

Innovations are not just for viewers at home. During the Supercup, a fiercely fought game which saw Bayern München overcome RB Leipzig with a 5-3 result, fans in the stands were able to use a 5G service at the Red Bull Arena to take advantage of another pilot technology, the 5G Stadium App. Developed together with Vodafone this allowed fans to have their stadium visit ‘digitally enriched’ by retrieving augmented player stats on their view of the pitch via their phone, on-demand. This was the big game shown from glass to glass indeed.