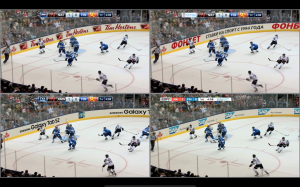 The powerful augmented reality technology of London/Helsinki-based company Supponor might become a big game changer when it comes to advertising at big sports events. Thanks to this smart technology the live transmission of a soccer match can be broadcasted to different regions all across the world with audience-specific virtual perimeter advertising.

The virtual replacement of the advertising is taking place on the fly and in response to changing environments.  Whether light or weather conditions change, unpredictable shirt / skin / hair colours or player movements, the technology responds in real time to create authentic virtual overlays (that look like physically present underlays) with market-leading pixel accuracy and service levels required to protect the images in the existing high quality broadcast production. After all, it’s these audio-visual images that earn the leagues and clubs huge sums paid for by broadcasters, sponsors and brands. The latest generation of the technology is able to combine physical LED systems in the arena with multiple targeted virtual advertising overlays on the broadcast feed.

In Germany, Supponor demonstrated its latest technology at a Bundesliga soccer match of Eintracht Frankfurt at the Commerzbank arena in Frankfurt towards the end of the 2016/17 season. “We had about 70 key decision-makers from the German football and sports broadcast industry”, says Charlie Marshall, Supponor, Chief Operating Officer (COO). The presentation also marked the highlight of a roadshow across Germany where the next generation of digital sports marketing was presented. The new technology combines physical LED systems in the arena with virtual advertising overlays on the broadcast feed. This technology unlocks new creative opportunities that enable advertisers and sponsors to connect with local audiences through the power of global sport – and achieve stand-out brand differentiation. Instead of broadcasting a single world feed of a globally viewed sports event, the content on the advertising boards can be targeted at different regions so that it also maximises the value of TV-visible in-venue branding.

Before this technology came along, the marketing rights were sold on a singular, global basis. An advertiser needed to be in the stadium to be on the broadcast feed and would pay a certain price for de facto global coverage. Thanks to this augmented reality technology the world can now be broken down into different regions or audiences and the content sold on an audience-specific basis. “There are certain brands that only want particular audiences. As you add up all the different feeds, you don’t get ten times the price you have because there is some price erosion when you move from global to regional”, Marshall remarks. “But you still end up with quite a significant value uplift. We have seen value uplifts at around five times for certain rights holders who deploy our technology.”

Supponor’s virtual replacement technology solutions have already been in use by its long time partner, Spain’s Mediapro, in La Liga, since 2013.  Over the last four years, every Real Madrid and Barcelona away game that has been broadcasted internationally, delivered up to ten targeted regional feeds for each game – each with distinct virtual perimeter advertising.  All virtual content is created and delivered in real time from Mediapro’s centralized world feed production facility in Barcelona and integrated into the extisting global distribution chain. The regions that are receiving unique feeds include South and Central America, Mexico, North America (US and Canada), China (including Taiwan and Hong Kong) Asia with a focus on Indonesia, sub-Sahara and Africa, Middle East/North Africa, Europe (outside of Spain) as well as two domestic feeds in Spain. “During the last four years, our technology has been deployed at hundreds of live broadcast matches, including 135 matches in Spain”, Marshall outlines.

Supponor’s market-leading technology, based on years of experience and patents across the world, integrates with the broadcast production at several key points in the workflow. In the venue, the latest generation of signage boards are used with certain enhancements.  Specially designed optics are then required that integrate with existing broadcast cameras. The host OB needs to share signals and data in a non-intrusive manner to ensure highly accurate real time image replacement. During the international production, the right virtual overlay content for the right markets is inserted for each feed. Thanks to the LED virtual hybrid technology, launched in partnership with UK company ADI.tv, Supponor can now offer support for any stadium viewing of dynamic signage by LED systems while still being able to deliver the same high quality virtual content tailored for individual regional broadcast feeds. “We are now able to do virtual overlay graphic onto physical LED systems”, Marshall explains. That is a significant development in the eyes of a football market like the Bundesliga. “They want to have compelling animated signage systems for the fans in the venue”, Marshall continues, “but they also want to be able to regionalize and target that advertising content through augmented reality technology effectively and profitably without risking the high quality broadcast production.”

This gives the rights holders and their brands and sponsor partners the ability to create value from being able to target this inventory. Furthermore, another value proposition is the overall technical quality of this solution. “When you are integrating with the most valuable content on the planet and your are putting new graphics into that broadcast feed, and you try to make those virtual overlays look like that they are real, you have to be very technically careful and advanced in what you do because all that image and pixel replacement needs to be authentic and respectful of the game itself. It needs to look like that content is really in the stadium”, underlines the Supponor COO. “When objects such as players move between the camera and the physical advertising is being replaced, we need to be able to cut out those moving objects in real time from the overlay so that it makes it look like the overlay is in the background where it is not.”

For more than a decade Supponor has developed and deployed a technology method to differentiate background from foreground pixels, which is based near infrared light – rather than colour or visible light which is common to older technologies such as chroma-key and susceptible to negative quality issues.

Due to the growing interest in the field of augmented reality technology, different technology approaches, including those based upon chroma key and other kinds of multi colour image replacement have also been tested. But these prototypes don’t produce the quality and consistency required when working in environments where billions might have been paid for various media rights..These other approaches simply haven’t worked  because there can’t be anything like a green screen in the stadium nor is it possible to distinguish perfectly between the background and the foreground of a TV image when all you have to work with is an image.  “Even with all the computer processing power in the world there are still some pixels which are indistinguishable from being background or foreground so you always get artefacts which are unacceptable to broadcasters seeking to preserve the integrity of their feed”, stresses Marshall. Supponor’s method, which has been commercially deployed since 2011, is based on utilising near infrared light: “We take colour out of the equation and we look at the image in a spectrum of invisible light.” This allows our solution to produce an incredibly accurate graphics keying to ensure that only the right bits are cut out – all in real time. “The software is proprietary and we are now in the process of scaling it and rolling it out in the market more widely.”

Furthermore, in 2016/17 Supponor deployed its system on a test basis at a club in the Premier League in UK. In Germany, the company is working with all stakeholders in the Bundesliga which has been evaluating this technology for a couple of years. Supponor’s first commercial event in Germany was in 2015 when it deployed the technology at the Telekom Cup. “They have done a series of tests with Supponor and with other vendors who are experimenting the different technology approaches”, says Marshall. “The Bundesliga stakeholders have committed serious time and resource to understanding this field of technology and are highly informed about the technical, operational and commercial implications.  We feel that when the time is right and they find a technology solution that they are happy with, then they will seek to deploy it.  We hope that is soon and will continue to work collaboratively in that marketplace towards this goal.”

Another major differentiator of Supponor’s technology solution is it’s ‘post-mixer’ deployment model.  The insertion of augmented reality overlays takes place as the very last piece in the production workflow, meaning that the number of differentiated feeds can be scaled exponentially, based on increasingly efficient video distribution.

Right now, the TV broadcast feeds are still distributed either via satellite or fibre. Therefore the advertising in those feeds, whether it is physical or virtual, is inserted at the master control room at the same time as all the other match graphics are put on. It becomes a finished feed before it leaves the master control room. “In the future when we have end to end IP-delivered feeds and workflows that are distinct from TV feeds, we will move into a different space where this advertising can be inserted onto a device from a cloud processing infrastructure,” asserts the COO. “Our technology is highly scalable and already set up for this development. We have already developed advanced prototypes and are engaging with the market on future roadmaps in this area. Our vision is for this augmented reality content to become very personalized – just like digitally served content which is online right now.”