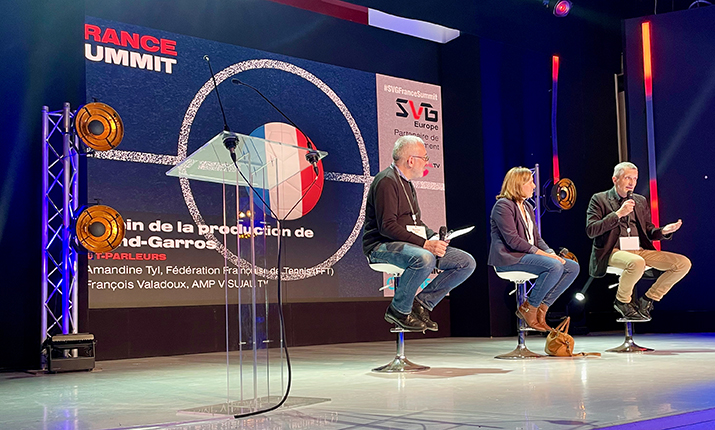 Remote production and the coverage of major international sporting events were among the main topics of discussion at last week’s SVG Europe France Summit (24 November), with the focus on this year’s Roland-Garros as well as planning for the Rugby World Cup 2023 and the Paris 2024 Summer Olympics.

It is the second time that SVG Europe has hosted its France Summit, with the event taking place at the Studio Gabriel, operated by AMP VISUAL TV and situated off the Champs Elysées which was illuminated by the newly set Christmas lights and decorations.

“It’s not often there is a broadcast and sport event in the French language,” said Nicolas Déal, chief technical architect at Orange Events and SVG Europe France ambassador in his opening remarks, adding that Orange is very much involved in preparing for Paris 2024 and the Rugby World Cup 2023.

The focus of the first panel discussion was Roland-Garros, and how remote production was used to cover some of the courts. Federation Française de Tennis (FFT), working with Host Broadcast Services (HBS) took over the production of the tennis event from France Télévisions in 2021.

“Many changes took place in two years on our way to produce the event and one of the most important ones was to de-localise production on the 11 annex (outer) tennis courts,” said Amandine Tyl, production manager of FFT.

“We thought we could do remote production as long as our customers didn’t see the difference and we did not much communicate about it, in order that the move remains neutral.”

Asked by Déal if people were disappointed not to be on-site altogether, she said: “Actually, to have people work in good conditions was part of the reason why we decided to do remote production.”

HBS was helped by outside broadcast and production services companies EMG and AMP Visual TV, with the latter supporting the remote production of 11 courts.

The move to remote production was primarily dictated by the small size of Roland Garros as a venue, said Tyl. “The event is developing, there are more and more people, and we have some serious space issues…it lasts 12 hours a day,  so what is best? Work in a tiny room in Roland-Garros or be comfortable in an AMP Visual room? We rather benefited from the change!”

AMP Visual TV chief technology officer François Valadoux added: “Some key elements are to be taken into account; there is not one single model. We did Ironman World Championship in Hawaii, that was another kind and a totally different set-up.” 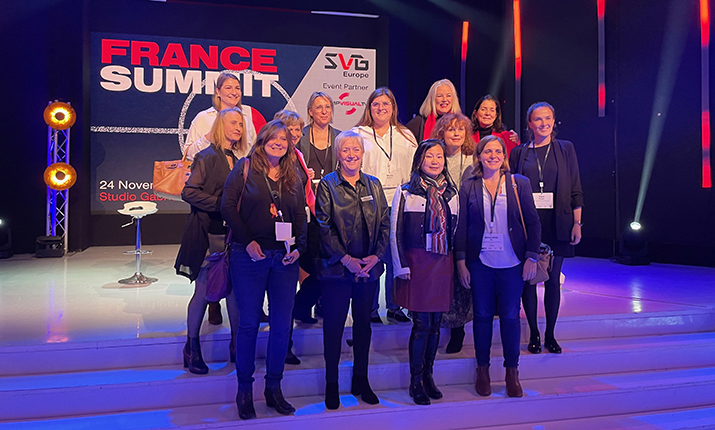 “You need to be able to identify what you want,” he continued. “In the case of Roland-Garros for instance, it was very much defined. You also need expertise across the full chain, with some experts live on the ground, for network management and at the media centre. At both ends, you need people who know what they are talking about.”

Déal then asked if the move proved successful and if remote production could still qualify as an innovation. “We thought we could do remote production as long as our customers didn’t see the difference and we did not much communicate about it, in order that the move remains neutral,” said Tyl. “And I can say it was a success.”

“Even though the development of remote production was helped by Covid, we are the proof that it exists in real life,” said Valadoux. “We know how to deploy it, but there’s still room for improvement in workflow and a lot to discover, so in that sense, it is still innovation,” he added.

Also asked about 4K, Amandine Tyl said that Roland-Garros pioneered introducing UHD HDR on four courts. However, although there is interest from broadcasters, the demand has not been very high yet, she said.  Valadoux added that although “4K is fabulous when you have a big screen,” it can still prove a bit tricky, for instance in choosing which standard to favour.

Guilhem Krier, head of new business and market development at Panasonic Connect Europe, the title sponsor of the France Summit, said remote production can also be chosen for environmental reasons. He have the example of Finnish production services company Suora, which is looking to achieve carbon-neutral production in live sports and estimates that fewer movement of people and equipment can reduce emission by 95%.

“We are going to need powerful tools. We will have to turn out some 4K HDR. We will also be staffing up with more crew members. It’s very exciting for everyone. This is a once in a lifetime opportunity!”

Suora is now able to handle up to eight remote productions in parallel with a minimum of footprint, Krier said. The company has been using Panasonic’s PTZ cameras, and the manufacturer will be launching in February next year its new AW-UE160 4K PTZ, that will offer further improvements for live sports. Answering another kind of demand for higher quality images, Panasonic will also be releasing early next year a new S35 studio camera offering cinematic picture, IP technology and the operability of a studio camera.

Meanwhile, Christophe Laborde, director sales engineering of cloud-based technology company Amagi, spoke about some new demands in the broadcast and monetisation of live sports linked to the development of OTT and FAST sports channels.

Amagi provided its solution to an unnamed sports network which had to deliver a sports competition across a multitude of diversified outlets in Europe and the Middle East. The solution provides a unified workflow, delivering content to OTT platforms and traditional broadcasters, also customising live ad insertion and adapting to time zones.

Preparing for Paris 2024 and the Rugby World Cup

The French are preparing for two major sports events which are to take place in the country in the next two years, the Rugby World Cup in 2023 and the Olympics Games in Paris in 2024, and the latter was the subject of the second panel discussion.

It’s still early days to unveil the disposal for the Olympic Games but it’s going to be big, promised Frédéric Gallard, head of production service of France Télévisions’ sports department. The public broadcaster is planning to dedicate three simultaneous live channels to the Games, he revealed, including one for premium sports and one for collective sports. 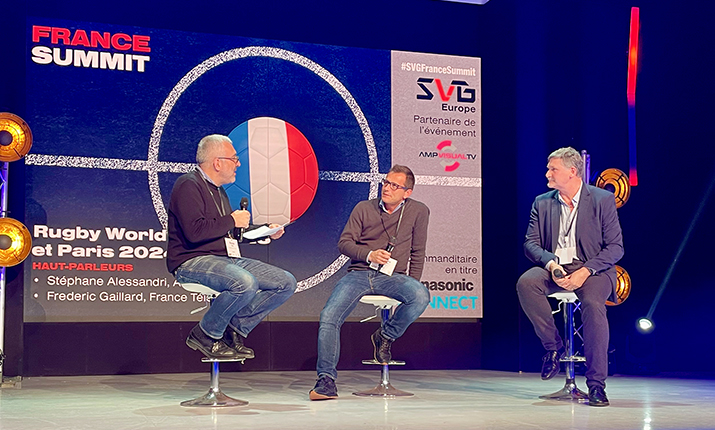 “This event is beyond sports,” he stressed. “News and other programming departments of France Télévisions will also be involved, we are going to be very present. France Télévisions’ investment will get a tenfold increase, we really want to do things a big way. “And the Paralympics will be the same level. We intend to fulfil our mission of public service/” For the production of the event, France Télévisions will partly rely on in-house resource, but will definitely need more, as the event will require 500-600 people he said.

AMP Visual TV spoke about its preparations for the Game. “We are in the middle of the tender process,” said EVP International operations Stéphane Alessandri. A consequence already is AMP investing in new equipment earlier. “Among others, three new trucks are coming, which would not have been the case if not for the Rugby World Cup and Olympic Games,” he said. “We are going to need powerful tools, for instance we will have to turn out some 4K HDR. We will also be staffing up with more crew members. It’s very exciting for everyone. This is a once in a lifetime opportunity!”