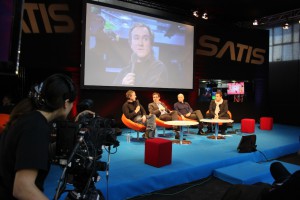 Satis, the Parisian trade show dedicated to broadcast industry professionals, took place from 19-21 November. The show, which is a sort of French equivalent of IBC, focused largely on sport this year.

AMP VISUAL TV was a partner of the event and presented its ICAR, which consists of a fleet of seven Mercedes cars in which Tricaster mixers and the 3Play slow motion replay solution have been installed. Three Sony cameras also form part of the specification. The ICAR vehicles are used particularly for the Ligue 2 football matches in France.

AMP VISUAL TV also covered the many conferences taking place during the Satis event and broadcast them online. One of them was dedicated to sports coverage and the production of images. On this occasion, Francis Tellier from HBS, host broadcaster of the FIFA World Cup, presented its production plan for Rio 2014. A key element concerns the 30,000 sqm area including studios, editing suites and various technical installations that will be made available to the various rightsholders.

In addition to the coverage of the matches, two channels, Clips Compilation Channel 1&2, will broadcast replays for television. The first one will group all the action replays and technical aspects of the matches whereas the second one will include replays referred to as ‘emotions’. It will be possible for both channels (there was only one at the previous World Cup) to be aired live by all the rightsholders, who can add them to the international signal.

A total of 34 cameras including eight Super Slow Motion and two Ultra Motion cameras will be deployed to film each match. HBS will also offer broadcasters a package of second screen applications, if requested.