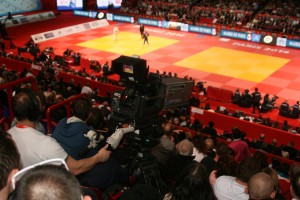 The French, who consistently perform well in Judo events, take pride in organising one of the most important tournaments on the Judo World Cup circuit every year. Broadcast by L’Equipe 21, the free-to-air channel on the French DTT network as well as numerous countries around the world, the filming of the tournament was rather unusual this year in terms of the production set-up.

Pierre-Yves Besson, sports sales manager in charge of mobile video for Euro Media France, presented the general set-up for the broadcasting of the event:

“We produced the international feed for the two main tatamis (tatami 1 and 2 of the competition) and the feed for L’Equipe 21. So there were three producers working at the same time, in the same OB truck: the XXL3.”

In practice, a second control panel was added to the main Grass Valley Kayenne switcher. The two producers therefore found themselves working side by side to produce the international feed of tatamis 1 and 2. Not too far away, a Kayak mixer was entirely dedicated to L’Equipe 21, who supplemented the basic feed with additional cameras. Altogether, 22 cameras (for the most part Sony HD1500 and HSC 300 cameras) were used.

A 7m long crane with one operator (run by Remote Concept, a company from Biarritz) filmed the moves on all the tatamis. Two wireless RF cameras were utilised to film the interviews in the warm-up areas and the mixed zone.

In all, 5 Multicam LSMs from EVS were running over a production network. “We also provided specific slow motion replays for the giant screens placed in Bercy,” says Pierre-Yves Besson.

Besides the television broadcasts, the web TV services of the French Federation and the International Federation offered live streaming of the event online.

Along with L’Equipe 21’s commentator position, two extra positions were dedicated to the English commentators for the two international feeds. The TV channels could pick up the international versions on tracks 3 and 4 or add the commentary to tracks 1 and 2.