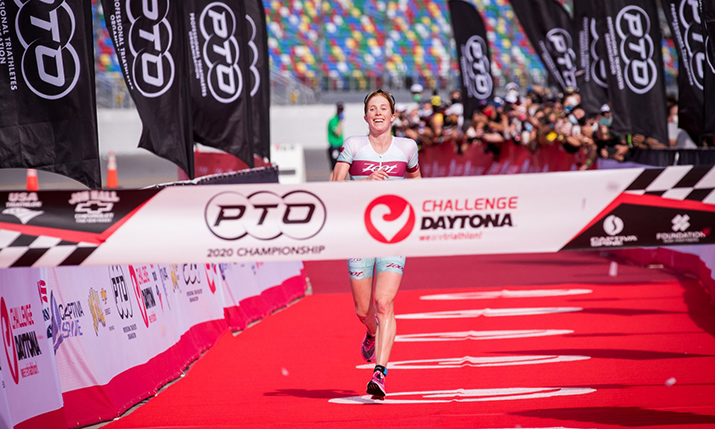 Building interest in a new championship format is often a challenge in itself, especially outside what is seen as the top tier of sports. Triathlon is hardly a nascent sport, but it will take a leap in profile when a major production swings into action to broadcast The Collins Cup in August.

One of the fixtures of the Olympics since Sydney 2000, triathlon is represented by the Professional Triathletes Organisation (PTO). Modelled on the PGA/LGPA organisations in golf or the ATP/WTA organisations in tennis, the PTO is a not-for-profit entity consisting of non-drafting professional triathletes who have come together to promote and contribute to the triathlon community.

The last major tournament, the PTO 2020 Championship, took place in Daytona, Florida last December. It was shown in over 126 countries, including prime time coverage on NBC-Peacock and NBC. The upcoming Collins Cup, however, which takes place at the x-bionic sphere, a purpose-built sporting complex in Šamorín, Slovakia at the end of August, promises to be in another league, coverage-wise.

“What we have with The Collins Cup is a well-proven format of scoreboard narrative and scoreboard action almost guaranteed to supply excitement,” says Martin Turner, a multi-award winning director and producer, formerly of Sky Sports, who will head the broadcast coverage as executive producer. “Essentially it’s an endurance sport, but you don’t want this to be an endurance battle for the viewer as well.”

Three teams will compete in The Collins Cup – USA, Europe and Internationals. Each team consists of six men and six women, all pro triathletes. In each individual race, or matchup, an athlete from each team will fight it out against their opponents. This means there are 12 races in all, staggered eight minutes apart.

For each of the 12 races, the winner is awarded three points, second place gets two points and third place receives a single point. In addition, athletes will be awarded bonus half points for every two-minute margin by which they beat their opponents in their respective races; a maximum of six minutes margin per race can earn a team a crucial one and a half bonus points. The team with the most points wins and will lift The Collins Cup.

Teams USA, Europe and Internationals are starting to take shape. The best triathletes on the planet, led by the PTO World number one ranked man and woman Jan Frodeno and Daniela Ryf, will be joined in Šamorín by the likes of Alistair Brownlee, Lucy Charles-Barclay, Lionel Sanders and Heather Jackson, as well as PTO 2020 Championship victors Gustav Iden and Paula Findlay. 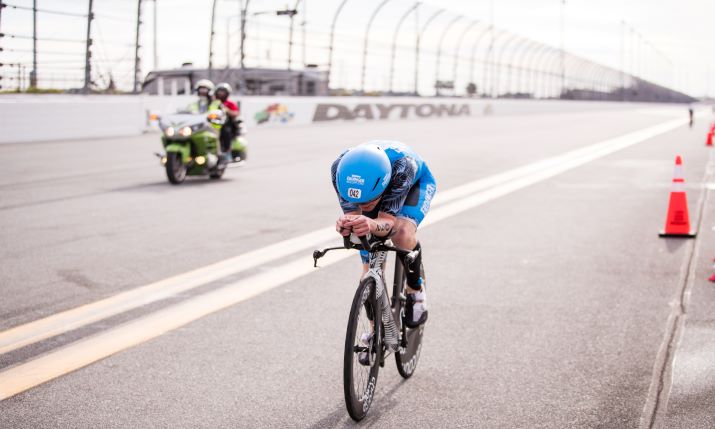 The Cup will feature 12 matchups, creating multiple moments of drama for viewers

“The great thing is we’ve got a gender-neutral event. Unlike the Ryder Cup, we have women and men, and everyone is as important as each other,” says Turner. He adds though that The Collins Cup format is similar to that other great international tournament in other ways. “It’s a challenge logistically. Like in a golf tournament, where they move from one hole to the next, we’ll move from one matchup to the next.

“We’ve also got the powerfully compelling narrative of the scoreboard. Anyone who has watched the Ryder Cup [or anything similar] knows how competitive that scoreboard narrative is and we’ve got exactly the same thing. So because of all these different events – we’re not just watching one race – we know that we’re going to have a lot of dramatic moments.”

“We have 12 matchups with three people in each one, so we’ll first have the excitement of the moment when the teams are introduced to the crowd; essentially, we’ll have 36 introductions,” he continues. “We’ve got 12 great moments at the start, we know we’ve got 12 great moments at the finish, we know we’ve got drama at every transition. We’ve got moments of drama all over the place. So, as well as the sport, the format is guaranteed to be exciting.”

That format, and the fact that the sport of triathlon is driven by numbers, means statistics will play an important role in the coverage. Christophe Balestra, who has recently joined PTO as the CTO and is a keen triathlete himself, says: “All the people who do this sport know their stats. But if you’re not familiar with a sport, then it means nothing. We need to attract people who are not necessarily triathletes through the storytelling, through showing off what the athletes are doing and make sure people understand how exceptional they are.”

“People are changing the way they experience and watch sports,” he continues. “We need to make sure that we provide a full palette in terms of the experience and how people interact with the event.”

“We’re going to have live statistics from the athlete,” adds Turner. “So we’ll know at any one stage where they are, exactly how far ahead they are, and it will be up to us to show whether they’re doing well by their own standards.”

“People are changing the way they experience and watch sports. We need to make sure that we provide a full palette in terms of the experience and how people interact with the event”

“First and foremost, it’s about narrative, it’s about story, and every matchup of three athletes will have a story,” he continues. “The statistics are important where they flesh out the narrative. It’s also about their relevance, about their accuracy and about how they resonate in the storytelling.”

Statistics will also inform the presentation aspect of the broadcast coverage. “All manner of information will be available to our team, we will be doing more extensive analysis in terms of timing than we’ve done before,” says Turner.

He has some very interesting ideas around using the Bolt High-Speed Camera Robot from Mark Roberts Motion Control: “I’m going to be using it as a live element, creating ‘live slow motion’ in a very stylised way to tell the story of how far ahead the athletes are, how far behind they are, and create a very cinematic moment.”

He’s also adamant about his duty of care for the commentary team who, given the length of the event, will be involved in an endurance challenge of their own. “It’s important that they get a chance to step away from the mic,” he says. “In terms of the freshness, the vitality and the insight of our coverage and the ability for people to remain objective and get different views, we think it’s extremely important for our commentators to be able to step away, have a breather and come back revitalised and refreshed.” 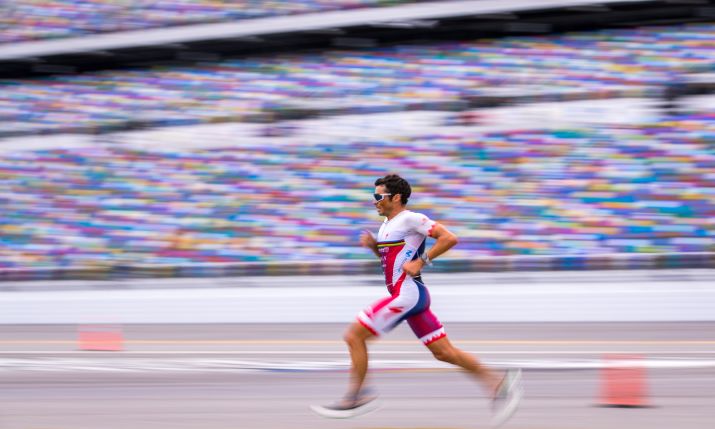 The other challenge is to make the triathletes into household names. “We don’t have to create any great athletes, but we recognise that we do have to tell their story. There has been very little publicity around professional triathlon, to such an extent that most sports lovers in the world would struggle to name one. That’s probably the first and most important job that we have to do – bring these people to everyone’s attention, so that people not only have someone to get behind, but also have an understanding of who they are and where they come from.”

“Triathlon has become huge over the last five or 10 years,” he continues. “The Collins Cup will be far and away the most highly produced event in the history of triathlon. With our ability to capture the mood and get people excited by it, it’s a real zeitgeist moment.”

Turner says triathlon has not been covered well in the past on TV. “That’s not a criticism of the people who have done it, it’s just a fact that there hasn’t been enough money and time spent on it,” he explains. “There hasn’t been the same level of commitment as the PTO are putting into this sport. What we’re trying to achieve will have its challenges, but we have a team with lots of relevant experience in lots of other sports.”

FilmNova is the production house and NEP is providing the OB facility. With the facilities and production team on site in trucks at the venue, this isn’t a remote production, “though there is probably no more remote event than a triathlon when you think about it”, says Turner.

“What we’re trying to achieve will have its challenges, but we have a team with lots of relevant experience in lots of other sports”

He adds that there will be “north of 100” production staff and a “significant number of cameras” covering the course.

“In terms of facilities, we’ll have the most [broadcast] facilities that there’s ever been on any triathlon of any length,” Turner explains. “We will have a wirecam at the first transitional area and one over the water. We will have fixed position cameras around the track. There will be at least one motorbike with each matchup, so we will always be able to go to any of them. Even though it’s spread over a massive area, you will always be able to get to a matchup. That’s an extraordinary logistical challenge, but it’s one which we have set ourselves and are absolutely 100% sure we can achieve.”

Because of the timing and duration of the races, which are slightly different for men and women, Turner says there will only be a short amount of time when all 12 races are actually on the track at the same time.

“By the time we get to all the men competing, we’ll be approaching the moment when the first women will be coming over the line,” he explains. “There’s always guaranteed to be some scoreboard narrative, something for the fans of the whole world to watch. There is literally something for everyone and there’ll be something happening at all times.” 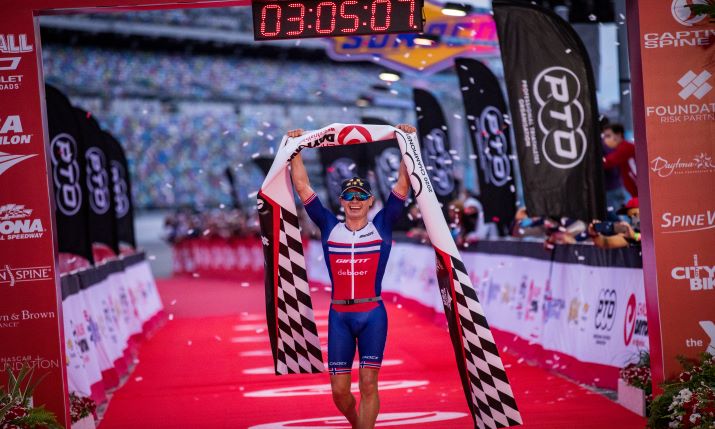 Turner isn’t giving everything away in advance, however, and is especially cagey about how the swimming element will be captured. “I’ve got a couple of things up my sleeve to reveal to the world on the day. But we will be doing some innovative things. And there will be a camera in the water.

“All the pictures are being fed back to us by a fixed wing aircraft, they’re not cabled to us. It will bring in signals from all the motorbikes and camera locations by RF from around the course. We’ll also have two helicopters. We’ve got a variety of ways of getting our signals back – 3G, 4G, 5G, RF from the fixed wing, essentially always guaranteeing that we have coverage from all over the course.”

In terms of rights holders and broadcast partners, Turner isn’t willing to say who they are going to be at this stage: the pandemic has made scheduling very tricky for all sporting events.

Talking of the pandemic, with The Collins Cup having already been shifted once due to lockdown, isn’t he worried that August will be a race too soon?

“Daytona was a real challenge, but it proved that we could put on an event under severe COVID restrictions very successfully. We’re also learning all the time from experiences of the rest of world of sport,” he says.

“We’re also very fortunate in that the x-bionic sphere is a self-contained, state-of-the-art facility which already has the ability to create a COVID-secure bubble,” he continues. “I wouldn’t say it’s easy, but I have absolutely no doubt that we can do it, and we’re in the perfect place to do it.”