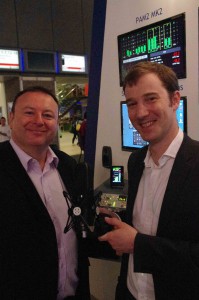 Audio monitor and processor manufacturer TSL Professional Products Limited (PPL) used IBC 2012 to confirm its acquisition of surround sound mic specialist SoundField, providing the basis for many 5.1 TV sport productions today. The deal extends TSL PPL’s 5.1 product range into microphones, which were displayed at the show alongside SoundField’s up and down-mixing systems.

Now branded as “SoundField by TSL PPL” the mic/processor developer’s research and manufacturing operation will be moved south from West Yorkshire to the new owner’s premises in Buckinghamshire by the New Year. SoundField’s head of R&D Pieter Schillebeeckx and Richard Cromack, who supervises production, remain with the company and will be relocating.

The Soundfield microphone was originally developed to record sources in Ambisonics, the spatial surround sound format conceived in the early 1970s by mathematician and recording engineer Michael Gerzon. The mic was produced for a time by Calrec Audio and then by an independent company also called SoundField, headed by managing director Ken Giles.

Martin Dyster, a director and head of audio at TSL PPL, explains that although the acquisition of SoundField was completed only 24 hours before IBC opened, negotiations had been going on for six months. “We had heard that Ken Giles was looking to retire and sell the business,” he says. “We knew the product from the Calrec days and could see what a good fit it – and the up-down-mixing systems – would be with our signal processing range.” The business was bought for an undisclosed sum and the
Giles family is now no longer involved with it.

TSL PPL and TSL Systems were created in July this year when the two divisions of TSL (Television Systems Limited) were split into stand-alone companies with their own management and premises. “We are now a separate entity and want to be seen as a creditable manufacturer in our own right, rather than one that was connected with a systems integrator,” comments Dyster, “Buying SoundField is part of that.”

Previously Pieter Schillebeeckx was involved in “all levels” of SoundField but now will be able to focus on product and brand development with the support of TSL PPL’s R&D and product management teams. Both Schillebeeckx and Dyster acknowledge that the current development of immersive vision and audio systems has reawakened interest in Ambisonics, which is being used as the basis of some research, but says there is a growing general interest in surround sound. “People are really starting to
look at the immersive side and we are keeping a close eye on that,” explains Schillebeeckx. “But actually 5.1 for broadcast is now only just beginning to happen and people are still planning what to do with it.”

The SoundField mic forms the basis of 5.1 sports production by many leading broadcasters, notably Sky. Schillebeeckx says sport “drives a lot of innovation in broadcast,” adding that the next big area is likely to be ENG: “More people are expecting 5.1 sound for that and it will become fully surround in the future.”

Dyster and Schillebeeckx say the next step is to fully integrate SoundField into the TSL PPL operation and the two will be discussing future plans and directions soon. As for any new SoundField by TSL PPL products Schillebeeckx says he has “lots of ideas both in mics and signal processing” but current production is the priority.