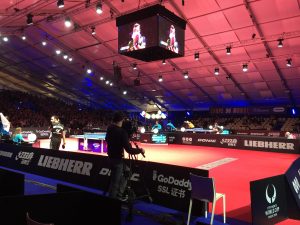 Taking place at Disneyland Paris from 19-21 October, the 2018 ITTF men’s World Cup for table tennis brought together the 20 best male players in the world for three days of competition. The host broadcaster for the event was VNProd, which once again sought to raise the bar in terms of capturing the intensity of table tennis at its best.

In France, the event was broadcast by Eurosport 2 and beIN Sports, as well as numerous digital platforms, including Yahoo, Sportside and France Télévisions. The international feed was aired worldwide and drew particularly large audiences in Asia, with CCTV among the specific broadcasters enjoying strong viewing figures.

VNProd was in charge of producing the World Cup coverage and worked with the technical assistance of Master Films and director Antoine Zaro Goni, who had previously worked on table tennis championships in France when broadcast by beIN Sports. He remarked: “We have chosen to focus on the intensity of the game by placing a camera mounted directly above the table at a height of nine metres.”

Given the relatively small area of action only six cameras are needed to cover a table tennis match, but without exception, particular attention is paid to the slow-motion replays. “The main camera that is used during the match has a telephoto lens and is situated above the backcourt line. However, immediately after a point we also use slow-motion replays to show the players’ strokes and spins in vivid detail.”

EVS LSM servers and Super Loupe cameras made it possible to detect a small 40mm sized ball and its deflected shots and passes. These were captured at 100 fps, which has now been widely established as the best frame rate for slow-motion coverage.

The 2018 edition of the most prestigious table tennis competition after the Olympics and the World Championships was held at Disneyland Paris, and its broadcast production was part of an ongoing collaboration with beIN Sports.

Looking ahead, coverage of the Pro A League – which is the top tier of French table tennis – will be produced by VNProd for beIN Sports, as well as for Sportside TV on the internet and the website of the French Table Tennis Federation.

In general, the technical setup will be similar to the one used to cover the World Cup, although there is a possibility that slow-motion replays may be used less extensively.