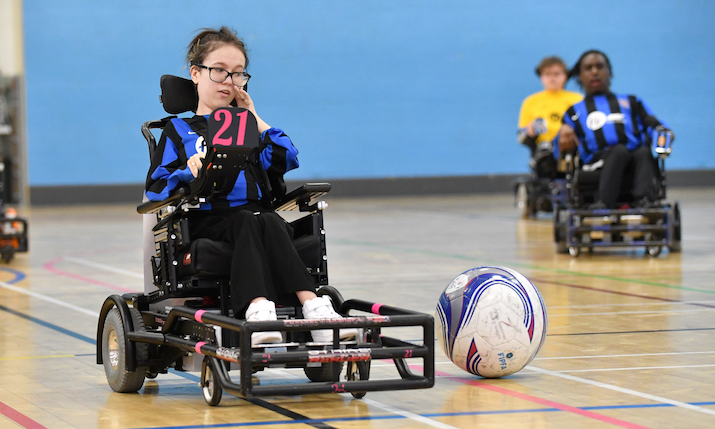 When it comes to powerchair football, player and fan dedication runs deep. Established in France in 1970 and formed nationally in England in 2005 by the Wheelchair Football Association (WFA), powerchair football has become one of the fastest growing parasports, with more than 1,000 UK players and many more globally. Individuals of all ages and genders participate in the athletic competition. Each year, the best English teams compete in the WFA National Premiership and Championship finals and elite players have a chance to represent their countries, with the England team – current European champions – set to compete in the Powerchair Football World Cup in October 2023 in Sydney, Australia.

In recent years, powerchair football has expanded its participant base and cultivated an impressive international fan following. With this growth, the sport has seen increasing demand for live stream match coverage, which the WFA has worked to deliver. Leveraging guidance from an Amazon Web Services (AWS) team in the UK and more than $25,000 in funding secured through the AWS Inclusion, Diversity, and Equity (ID&E) Innovation Fund, the WFA had originally established a ground-to-cloud workflow using AWS Elemental MediaLive, an AWS service for real-time video encoding in the cloud, to live stream high-quality match coverage to YouTube. Since revamping its live stream setup with the help of AWS, the organisation is drawing new attention to the sport and is continuously evolving the workflow.

Each season, the WFA holds 28 national league matches over ten successive weekends. All events take place in a university gym in Nottingham. Travelling for games can be difficult for fans, and Championship and Premier League matches typically don’t occur on the same weekends. These constraints and venue capacity restrictions have historically made engaging spectators in the sport challenging. It also meant that players couldn’t watch their own competition live.

Live streaming was the obvious answer to broadening access to live matches. However, establishing a cost-efficient workflow to run the streams with limited space, power and network capabilities proved another story. Even with the proper equipment, volunteers without professional broadcast expertise would also need to operate the kit, which posed additional bottlenecks. After learning about the organisation and its dilemma, an AWS employee applied for AWS ID&E Innovation funding on behalf of the WFA. Once the application was approved, the allotment enabled WFA to overhaul its live-streaming workflow.

Commenting on the collaboration, Alex Dowding, vice secretary, WFA, explained: “As a small charity, with a limited team, our challenge is always accessing the in-depth knowledge we need to innovate for our players, coaches, officials and supporters on things like streaming. It is not just the fact that AWS have given us such a generous grant, but the time their experts have put at our disposal is phenomenal.”

As more of the local AWS team learned about the project, they stepped in to assist. Working hand in hand with the WFA, the team weighed all available workflow options with an eye on creating the smallest possible footprint in terms of space and power. Ultimately, they determined the best solution to provide a high-quality, reliable, robust and flexible service for the WFA’s immediate and future needs was to build on the solution in place. This used LiveU Solo taking the feed from camera to AWS Elemental MediaLive for live transcoding and Singular.Live for motion graphics insertion before being delivered to YouTube for distribution.

To address operational bottlenecks, AWS worked with the WFA and other sports customer requirements to build out an application that provides live production control of MediaLive and Singular from a simple interface. This allowed anyone, on or off site, to control the production across multiple courts with camera switches, motion graphics insertion and monitoring with no technical or AWS experience required.

This solution is now available as an opensource project for other federations and customers to use. Before the Innovation Grant, the WFA used an overhead fisheye camera mounted on a dinghy mast to capture action across all the courts, while a handheld camera, donated by IMG Arena, was leveraged by a commentator. Through the grant, the WFA was able to upgrade its broadcast and commentary equipment, adding additional cameras, microphones and audio equipment to create more engaging content.

After the first couple of weekends working with the new equipment and workflows, Dowding noted: “Our set up and take-down time has now been reduced from three hours per day, to less than an hour. With the new commentary set up, we no longer need someone with technical know-how to set-up commentators. Already we have gone from limited commentary to all games now either having one or two commentators, most of whom are wheelchair users and players themselves, adding tremendous game insight for the viewing audience.”

Since the launch of the WFA YouTube channel, seasonal views have risen from 14,000 to 55,000 and average view times have increased by nearly six minutes. Unique viewers are in the thousands. Considering the WFA leagues collectively include 140 players, the numbers indicate international reach far beyond the local player community. As project stakeholders and players have expressed, the ability to tune into these matches live online has helped boost player morale and team camaraderie, while also inspiring new public interest in the sport. The recent addition of post-match player interviews, facilitated by the new AWS Elemental MediaLive channel orchestration tool, allows the same streaming team to add additional engagement and interest throughout a match day, with limited extra equipment or workload.

Aspire PFC & England captain Jon Bolding shared: “I have played powerchair football most of my adult life. When I started, I could never see another team play, or learn skills, unless I was at a game. To provide a new generation of players, in the UK and across the globe, with regular access to view some of the best powerchair football club games in the world means everything to me – and will only make our future players even better.”

“For all our players to be able to watch streams of games, wherever they are, is hugely beneficial. Even the simple ability to watch your teammates play if you are unwell or unable to travel makes a massive difference to us as teams and players,” added Cath McNichol, Middlesbrough coach and player, National Welfare Officer at the WFA.

Brian Dix, chairman, WFA, noted: “The last couple of years, throughout the pandemic, have been extremely challenging and isolating for our playing community and their families. To have the support of AWS, a global leader in their field, to make it easier for us to bring the sport to future players, families and supporters and grow the appreciation of the game nationally and internationally is priceless.”

After the first weekend of the Premiership in December, with commentary for all games and the introduction of post-match interviews, there is already a measurable impact on streaming engagement. Compared with the opening weekend from the previous season, views rose by 40%, unique viewers and watch time rose by 50%, and the average engagement time extended by a further minute.

Although the WFA and AWS have made major headway since kickstarting the project, the companies continue to work together to ensure the streaming workflow remains sustainable for the future. The team is exploring workflow modifications via solutions like automated orchestration of live streams as well as solutions that would make it easy for live production and social media highlights to be driven by people with little to no technical or cloud expertise. Monetisation is also another area the team is exploring, as live stream engagement is expected to continue.