Mega-TV HDwireless has recently supplied an HD wireless solution for the coverage of a gruelling bicycle race through Poland.

The race ‘Polish Street Championships of the Elite’ took place in Gdyna on 25 June. Start and finish were located immediately by the harbour of the city on the Baltic Sea. The race went 260km through the region and back to the harbour. 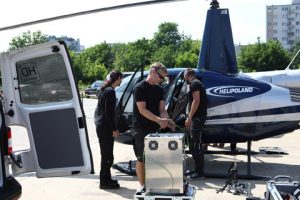 Polish TV requested multi camera live coverage of the start and the final 80km of the race. Mega-TV HDwireless, being the supplier for wireless camera technology and service contractor for project planning and execution, provided the RF-transmission concept.

Patrick Nussbaum CEO HDwireless commented: “Aside from the route specifications, the operation of three motorbikes with camera crews on the road, additionally, a camera helicopter would produce interesting aerial footage.”

For the set up this meant to deploy a further relay helicopter, and the use of a rather high and powerful antenna system, lastly for reasons of the topography of the backcountry, and an antenna lift with a hub of 50m above sea level within the harbour of Gdynia. Also, the transmission period and its flight time suited the airborne RF-relay stations inside the helicopters.

Two HDwireless GPS antenna trackers optimised the radio technology. Nussbaum stated: “We had developed this tracker at the beginning of the year, and we’ve already had the opportunity to successfully test it with pilot projects at the Wings for Life World Run in Switzerland, and in Dortmund, celebrating the BVB-Soccer Cup parade. Here, in Gdynia the system is tremendously important to supply the best possible RF-signals.”