The Borussia Dortmund Corso Truck drives past tens of thousands of onlookers standing by the roadside, cheering their soccer club for winning the German Football Association Cup. WDR TV transmits the spectacular parade live for several hours showing pictures of the club’s truck straight from its course.

This is a treat the TV audience and the outside crowds take for granted when watching from the LED screen on Friedensplatz. Looking at this from a purely technical perspective it is a complex job for a wireless camera transmission that WDR TV assigned to the broadcast service provider HDwireless.

CEO Patrick Nussbaum said: “The route of the Corso Truck is 10 km long, and it leads through the narrow inner city streets of Dortmund. With the RF antennas of our HDwireless city-net we cover the entire stretch of the parade. This makes uninterrupted transmission of the live event possible regardless of the position of the truck on route.” 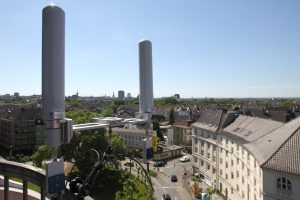 For this purpose the provider conceived and installed a radio network consisting of a system of transmitters and receivers in several towers and steeples around the city. The flat roof of City Hall on Friedensplatz is the centre of this invisible network. Here, on a large tripod sits a new gadget, developed by HDwireless that had its successful premiere in May on the occasion of the Wings for Life World Run 2017 in Switzerland. The GPS antenna tracker directs its receiving antennas towards the GPS coordinates of the transmitter, and it is therefore able to follow mobile transmitters.

As for the operation in Dortmund it means an exactly positioned alignment with the BVB Corso truck, which continually transmits video signals of two wireless camera systems from the place of action. HDwireless decodes the receiving RF signals with its own receivers and submits them as standard video signals to WDR TV’s OB vehicle at city hall.

Nussbaum said: “The GPS antenna tracker enormously increases quality and stability of the receiving signals. We plan to realise future projects this way, which previously had not been possible without the helicopter downlink. For our customers the use of the GPS tracker technology, of course, means cost savings when using wireless camera transmissions in vast areas.”