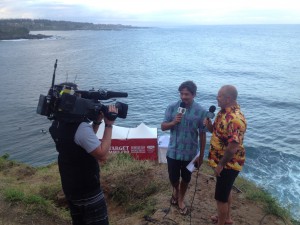 No sports property brings live sports production to the far-flung destinations all over the planet quite like the World Surf League. Whether it’s Australia, Brazil, Fiji, Hawaii, Portugal, South Africa, South of France, Southern California, or anywhere else, a globe-trotting events calendar keeps the WSL’s in-house live-production and postproduction teams on their toes and ready to innovate.

“We don’t ever want to find excuses why we can’t do something; we want to prove that we can,” said Matt Percy, managing director, Pacific Broadcast, which provides production facilities and services for the WSL year-round. “We are trying to ensure that whatever coverage we come up with is stadium-type coverage — with the added aspect of water.”

And the WSL’s streaming-first approach has caused fans across the globe to take notice. According to the New York Times, an average of 6.2 million people tuned in to watch the Billabong Pipe Masters live on YouTube in December — besting the U.S. TV audience for the final game of the 2014 Stanley Cup Final — with 35%-40% of its viewers on mobile. WSL is always on the lookout for the next great innovation to engage its growing audience.

“This sport changes constantly, so you need to be able to adapt to situations that are usually very challenging,” said WSL VP of Postproduction Rob Hammer. “We don’t ever want to be trapped in a box when covering surfing.” 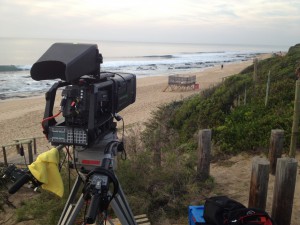 One of several Grass Valley LDX cameras deployed by WSL

The cameras: Making it look easy

The average WSL camera complement varies from event to event but usually consists of 13-15 cameras, most with data-telemetry and 99X or 100X zoom lenses. Four main fiber/triax cameras (primarily Grass Valley) cover the break. RF cameras are in the water, manned by operators paddling on surfboards or aboard jet skis; another RF roves the beach, and robotic and POV cameras capture crowd reaction and beauty shots. Either a helicopter or a drone supplies aerial shots, and two hard cameras cover the beach-side host set and commentators.

“We try to capture at a high frame rate whenever possible, because surfing is obviously great to see in slow motion,” said Percy. “We are always looking for the next best angle on surfing. It’s a great environment to innovate, and that’s what I really like about it. The best compliment you can get is when people look at a shot and say it was easy, which it most certainly is not.”

From fibre to RF, staying connected at sea

WSL relies heavily on fiber, often laying glass through extremely rugged terrain and even running it under the ocean to cameras positioned in the water.

The RF cameras manned by operators on boards or jet skis are equipped with a water housing featuring a completely untethered RF link. From a safety perspective, because the camera housing is not attached to a jet ski, the operator can just jump off if knocked over by a wave.

“The water washes over the front of that lens, and there’s a big reveal and suddenly you see a surfer paddling by,” said Percy. “It’s just an amazing angle to have, and to have it in HD with camera control live is phenomenal.”

In addition, WSL deploys a reporter in the water with IFB communications linked to the primary commentator on land, delivering live reports throughout the coverage.

“Having a [reporter] in the middle of the ocean and transmitting live really hadn’t been done before,” said Hammer. “Everything is completely wireless: audio and roving camera on him. That was pretty unknown territory.”

The crash of the wave, the swish of the board
WSL faces a colossal challenge when it comes to audio, needing to both capture the sound of waves crashing and block it out when necessary. The production team deploys several effects mics in its water housings and also gets close-up effects from the in-ocean reporter position.

“We go to a lot of trouble to get mics close,” said Percy. “The waves can just sound like white noise sometimes, so getting definition is a challenge. We are always looking to reinvent the way the effects are covered.”

53-footers and flypacks: A home base always on the move
In terms of production facilities, WSL relies on Pacific Broadcast’s OB1 and OB2 mobile production units for Australian events, its USA 1 mobile unit for mainland U.S. and Hawaii shows, and a series of flypacks for other locations. All trucks and flypacks feature Grass Valley Kayenne switchers, EVS XT3 replay servers (the production team also has access to an eight-channel Grass Valley K2 Dyno replay system, used by the WSL judges), and Yamaha CL5 audio consoles. 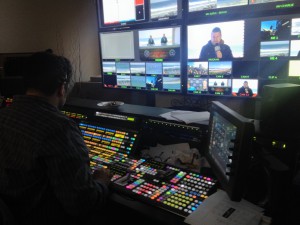 “We have a no-compromise approach with the flypack: you should get as much functionality out of the flypack as you do [with a trailer] despite the fact that it’s sometimes built on the top of a cliff,” said Percy. “The production [crew] should be able to walk into a truck in Australia or into a flypack in South Africa and see no difference in the production facility. I think we pretty much achieve that.”

Highlights packages play key role
With WSL events running all day for days at time, often with long breaks in the action, features and highlight packages are integral to the live-streamed shows.

“[The gimbal] changed the way we shot our sport on the beach,” said Hammer. “We can now run after our athletes, and it looks like you set up a dolly for a true film shot. I’m really proud of our field work and think it’s second to none in any sport.”

The field team delivers the content to the postproduction team — several editors, a media manager, and a highlights editor — which produces nearly all features and highlights packages onsite. All pieces are produced on Apple iMacs with Adobe Premier Pro video-editing software, and content is stored on an EditShare Field 2 portable storage unit.

“Given all those codecs and formats and frame rates, Premiere is the only NLE that can spit out a completely flawless product in look and feel in a timely manner,” said Hammer. “It helps since you don’t have to do any rendering except on export. It’s probably the backbone of everything we do both at home and here.”

Long before WSL was created for the 2015 season (ZoSea Media Holdings acquired the Association of Surfing Professionals in 2013 and unified the loosely aligned tours under the WSL brand), live transmission of surfing events was an issue. Sponsors for various events transmitted the events on an ad hoc basis, often operating on a simple software encoder and unreliable bandwidth schemes due to the remote locations.

In an effort to right these issues, WSL opted to move to satellite delivery and turned to Encompass Digital Media. The league now delivers an MPEG-4 9-MHz feed via a C-band flypack with redundant encoders, modulators, and frequency changers (in case of power surge, since many WSL shows run entirely on generators). Encompass delivers this feed via its satellite and fiber network to WSL’s Santa Monica, CA, facility.

“Encompass proved very adaptable, which is exactly what you need for surfing,” says Hammer. “Encompass has such a great relationship with satellite providers that it allows us to be very flexible.”

Santa Monica on the way
Judging by the recent streaming audiences, interest in WSL in on the rise, especially among the younger demographics (WSL estimates nearly 70% of its audience is between 25 and 44 years old). Construction and integration are under way on WSL Studios, a 6,000-sq.-ft. production facility at the league’s Santa Monica headquarters, which will be tasked with creating studio programming and original content and storing the league’s cache of historical surfing content.

“We have about 30 years of content we have acquired,” Hammer noted, “and we have also started massively archiving everything we do today: 300-400 TB a year across all of our events. Our goal is to be like NFL [Films], where we have this great history of surf.”