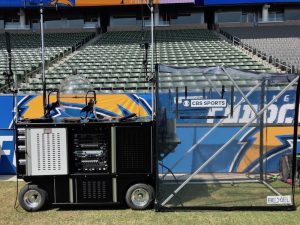 The Bexel Sideline card in use with CBS Sports

The Sideline Audio/Video Cart maintains its plug-and-play versatility for streamlining the acquisition of field audio and video feeds in all types of stadium sports productions. Currently used on the sidelines of this season’s CBS’s NFL “A” and “B” games, the new addition of the talent tent can now be adapted and installed for all clients of the original Bexel Sideline Audio/Video Cart introduced last year. The unit is easily deployable with its pneumatic tires and lightweight aluminum shell, and can be positioned on the sideline or end zone of a sports field, or anywhere requiring quick and easy connections for video and audio feeds.

“Our original Sideline Audio/Video Cart was a big success with broadcasters, giving them all the technology they needed in a compact package that is quick to set up,” said Lee Estroff, vice president, account development, Bexel. “But through the use of the cart last season, we knew that it needed one additional element — the human element. So we began developing a pop-up tent to protect on-air talent during the game. And just like its predecessor — the original Sideline Audio/Video Cart — there is nothing else like it in the industry.”

Each Sideline Audio/Video Cart is designed for each specific customer and use, with the ability for all included equipment to be pre-wired within the cart. This significantly reduces setup and strike times. Connectivity to the Mobile Unit is via single-mode fiber.

As with the original design, the cart’s built-in patch bay makes it easy to monitor, troubleshoot, and manage signal routing. It comes with integrated antenna poles, customized drawers for stowing gear, and a flat tabletop surface that can serve as an on-site workspace. The standard cart measures 72 inches by 47 inches by 36 inches, providing ample rack space for shows of any size, and its rugged, weather-resistant housing protects gear in all types of conditions. The cart is powered via single 110-volt outlet and provides an extended period of built-in UPS backup power.

Bexel provides a variety of audio, video, communications, lighting and transmission equipment for all US NFL broadcast rights holders. This includes CBS, ESPN, Fox, NBC, and NFL Network, each with packages tailored to suit their individual production needs, from media conversion to RF audio packages, to lenses and super slo-mo packages.